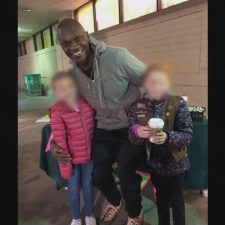 The viral photo of McGowan and the cookie sellers.

There was a feel-good story making the rounds last week in which a man, seeing Girl Scouts selling cookies in the cold, bought out their entire stock, all $540 worth, so the girls wouldn’t have to stand outside anymore. The sweet human-interest story went viral, complete with photo of the generous man and the smiling Girl Scouts. But it’s a complicated world we live in, and as happens all too often these days, the story took a turn for the negative. The benevolent cookie buyer, Detric Lee McGowan, turned out to be an alleged drug dealer. He was arrested a few days after the cookie incident and charged in a federal indictment with “conspiracy to import and possess with intent to distribute heroin, cocaine and fentanyl.”

So, did the money he spent on the cookies come from his illicit drug dealing enterprise? It is quite likely. As we have seen lately in the news, the feds do enjoy confiscating the ill-gotten gains (and even the non-ill-gotten gains) of criminal defendants. And while reports say that authorities seized “cash and other assets” from McGowan at the time of his arrest, there is no word yet on whether the government is coming for the cookie money. It does raise an interesting moral question: should the Girl Scouts keep the money, knowing its likely origins?

Of course they should. If the feds can confiscate “drug money” which ostensibly then goes into public coffers (and is quite often used on a local level to purchase equipment for law enforcement), why shouldn’t it go to a worthy program like the Girl Scouts? It is at least as worthy as that new push-bar they want to put on the front of a new cruiser. And drug dealers are just people, who spend their money at the grocery store and Target and all the same places we all do. None of these establishments rush to return their profits if they find out the money spent there had an illegal origin.  Perhaps if McGowan had robbed a bank to get that money, a stronger argument could be made that the cash needs to be returned to its rightful owner. But in this case, I would argue that there is no other “rightful owner”. For their part, the Girl Scouts say they will cooperate with authorities however they must. (I will avoid the obvious joke about the addictive nature of Tag-A-Longs.)

This story seems to be a milkshake duck¹, but that’s because we can’t tolerate imperfection anymore. If something is problematic in any way, then it’s problematic in its entirety. This is the wrong way to evaluate the world around us.

Detric McGowan may be a drug dealer and a criminal. But he is also a man who saw little girls out in the rain and cold and did a kind thing. He could have taken his $500 in drug money and bought a watch, or clothes, or shoes, or other creature comfort. Instead he used it help out some children. Bad people are capable of doing good things; good people are capable of doing bad things. We can argue about which of these categories describe McGowan, but we don’t need to dismiss his act of kindness just because we now know the unsavory details of the man and how he probably earned that money. Had he turned out to be some sort of pervert or child abuser, we could justifiably look upon this story with repulsion or dismay. It would indeed take on a dirty hue, but mostly because of the ick factor of that hypothetical person’s interaction with children.

There are many ways that a person may earn money that are perfectly legal but which many find unseemly. Would it be a story to find out some cookies were bought by an exotic dancer? The owner of a liquor store? The CEO of an opioid manufacturer? A lawyer?  While it can certainly be strongly argued that McGowan’s money was earned at the expense and misery of addiction, drug deals, while illegal, are a voluntary business transaction.

And if the government is intent on recovering the spoils of McGowan’s criminal enterprise, well, they can always confiscate the cookies. I doubt even the biggest Thin-Mint fan could eat 120+ boxes in just a few days.

¹A milkshake duck refers to the internet phenomenon in which a feel good story turns out to be problematic, such as when the go-fund-me for a homeless man who helped a young woman who was out of gas turned out to be a colossal scam.)