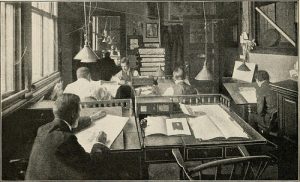 The journalists of tomorrow will be bitter, poor, or trust fund babies, and if you think they hate capitalism today, just wait.

Four years ago I hung up my steno pad and my press pass and defected to a marketing job. Newspapers are in a slow death spiral and, as an eager 30-something who worked at a small daily newspaper, I had had enough.

It wasn’t just the low wages and awful work environment that drove me. I was finding myself resenting average, normal people for doing things like buying a house or going on vacation. I didn’t like these feelings of envy. It wasn’t who I wanted to be.

My coworkers and I were young, bright, and willing to work hard. We typically put in 50-plus hours a week and only got paid for the first 40. Editors hate paying overtime, but eventually I learned if you ignore them and put in an occasional 2 or 3 hours of overtime on your time card they won’t retaliate.

I started at $13.50 an hour at my last job. This is with more than five years of experience and a former editorship on my resume. After three years, we all got bumped up to $15 because no one would fill a vacancy at the low rate.

Good thing too, I was already sick of covering teacher and nurse pay protests – folks who made way more than us who were never satisfied. Now we had activists demanding fast food workers get paid more than I made.

I never understood how colleagues could afford cigarettes or alcohol. I lived on a tight budget for years. My big luxury was not having a roommate.

The Bureau of Labor Statistics reports the median journalist wage is $19.67 an hour, but that lumps in radio broadcasters and TV people as well. That’s more than I ever saw, and still not much for such a demanding job.

With the number of jobs declining each year, growing workloads, and scant opportunities for promotion, I am concerned with how these awful conditions will affect news coverage as more reporters get bitter about their lives.

We already have what I see as a significant problem with political bias painting news stories – an overwhelmingly left wing workforce chooses and frames stories in some part by their personal leanings. Let’s add to that a truly lackluster experience with their own finances.

While I had my fill of interviewing intellectually unimpressive whiny teachers who could never appreciate what they have, I imagine many of my progressive colleagues felt the same way while writing about business owners and doctors. On all fronts – including my own – that is bound to mix a little extra salt into the soup.

I expect we will see more reporters with personal stakes in wealth redistribution, defending the social safety net, and a general contempt for the wealthy and successful.

Truth be told, I think the average reporter was already pretty bitter to start with. It’s going to get a lot worse.

There are other ways that individual reporters can make ends meet, of course. Reporters who marry high-income spouses can get their bills paid even, an option that I imagine will mostly exist for young attractive women. We may also see young people from wealthy families snatch up more journalism jobs because they won’t have to worry about making rent. People from poor, minority communities will be shut out.

I wish there was a simple solution that would allow a more diverse, well-adjusted, and normal workforce to make up the ranks of tomorrow’s journalists. I don’t think it’s out there to find, and the effect on our coverage will be more bitterness and alienation.

Good luck, guys. I’d love to help steer journalism back towards something accurate and fair for the good of the public, but I’d rather start a family and be able to impulse-purchase a sandwich now and then.

Michael Hirschbrunnen is a former mainstream journalist who now works in finance.