Sunday Morning! Art that Everyone Should Know

By now, the Germans must have a word for the experience of moving to a new place and discovering embarrassingly that no one there recognizes the old regional references that are a part of your permanent memory. Surely, everyone has heard the Jhoon Rhee Self Defense jingle so many times they’ll be humming it on their deathbed, right? (If not, my apologies.)

A somewhat related phenomenon happens when works of great art are so firmly a part of your mental furniture that it seems a great cosmic error of some sort that everyone else doesn’t know them in the same way. I’ve felt embarrassment before when casually mentioning some filmmaker or writer whom I love, assuming the other person knows them, only to find them staring blankly back at me. Nobody wants to be that stereotypical “hipster” who only digs the most obscure musicians, artists, and movies. But this isn’t that; it’s not a matter of snobbism as much as a strong desire to evangelize for certain artists who somehow haven’t gotten their due.

So, let me ask: Who are the artists that YOU want to tell the world about RIGHT NOW?

Now, let me pitch two of‘em. There have been plenty of musical groups who overcame the slight disadvantage of being Canadian to achieve fame and fortune. But SIMPLY SAUCER were barely recognized during their most active period, when they were practicing every night in a part of Hamilton, Ontario that was known more for bikers than artists, playing school dances to disapproving kids, releasing one 45 during that period, and seeing a full-length album of the recordings they cut in a studio with Bob Lanois (brother of Daniel Lanois, who later recorded a bunch of songs for an obscure Irish band) on one side and live recordings from the roof of the local mall (where I work) on the other, released ten years after they broke up. 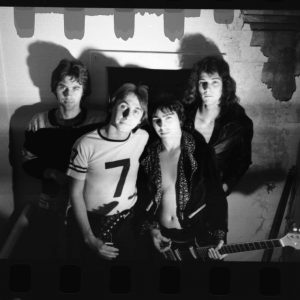 But, here’s the twist- that album, Cyborgs Revisited, is pretty incredible, and is now considered by many to be one of the greatest Canadian albums of all time. I’m a little biased because Edgar Breau is a local gem, but to me it’s like the missing link between Pink Floyd and Ray Davies with a little Velvet Underground in there too. The band has gotten back together in various incarnations and released other albums- I am partial to the rarities collection Saucerland and the more recent Baby Nova. A two-disk version of Cyborgs Revisited has most recently come out with the full set from that legendary live concert (played on the same day that Pink Floyd fans were famously trashing our local stadium!). I think that second disk should have been remastered, honestly. Start with the one-disk Cyborgs Revisited and see what you think.

And tell me, are you absolutely sure that Bullet Proof Nothing wasn’t ever used in a Wes Anderson montage?

The second one came up in a thread here recently, in which I was found to be a very rare admirer of the writer Breece D’J Pancake to not have been born in West Virginia. A writer of short, brittle stories about hard lives in West Virginia, he had six stories published during his lifetime, six more after his death, and took his own life at 26, a fact that could overshadow his work were it not so strong. I was actually introduced to his stories by a great poet in Toronto who wanted me to know that this was real deal writing.

Short stories and poetry do not come easy for me to write. The concision of them runs counter to my tendency to fill in details and unspool digressions. A good short story is like a Japanese watercolor in which a few brushstrokes create a mountain or an aged pine tree. It’s the ability to select the right details to evoke a whole life that eludes me. I’ve heard a good short story described as a moment plucked from the river of life. I tend to imagine more that crime movie cliche: we’ve found this severed finger in a field and the reader extrapolates a whole life from that.

And then you have a really great short story where it’s like finding a key in a field that unlocks a room full of wonders. With Breece D’J Pancake, it’s more like a door opening on a very long and dark mine shaft. His stories are often bleak and enigmatic and hard. They make you feel like you’re living in poverty in a part of the country that young people leave when they’re old enough. They’re often open-ended and we’re left not knowing quite what to make of them.

And they’re not without flaws. His female characters are a little one-dimensional and I find he tends towards the grotesque a bit too easily. He also immerses the reader in regional dialect and terminology, which I don’t really think is a flaw, but it’s good to have a dictionary on hand.

Nevertheless, his stories do two things very very well: they make you feel exactly like you’re there with his characters, and they contain passages of prose as lovely as this:

Bo felt this to be the royal time of his day- these sparse, solitary moments when the rest of the world was either going to bed or not up yet. He was alone, knew the power in singularity, yet was afraid of it. Insecurity crawfished through his blood, leaving him powerless again. Soon he began a conversation to make the light seem closer to the road.

Here is the most recent edition of his one book (with the cover I prefer).

So, again what great artist do YOU need for us to know about?

And what are YOU reading, watching, playing, or pondering today?