They Stole My Batman

Every afternoon as a kid, I would run home from the bus stop, to watch my Batman. If you weren’t an early adolescent during the mid 90’s, Batman: The Animated Series (“TAS”) aired from 1992 to 1995, and it was brilliant. Developed by Bruce Timm and Eric Radomski, it had quality animation, voicework, and plotting. More importantly, it was my Batman, my childhood cartoon, and it set an impossible standard which no comic book television show, cartoon or otherwise, has ever matched. The broad subject of TAS was heroism. The aesthetic was film noir. The essence was Batman.

I rewatched TAS, and it is remarkable how well it holds up, both as a cartoon, and as a meditation on the heroic. TAS presents a compelling, humane treatment of a superhero who was above all else a humanitarian. The ass kicking was secondary — great, but secondary. Batman was a detective and, yes, a slightly superhuman ninja with vaguely magical technogadgets. However, his principle study was neither Crime, nor Vengeance, but the vagaries of the human condition. His enemy was what corrupted people, what lead them down a bad pass. He was an obsessive redeemer.

Every TAS villain, with one exception, was treated as a tragic, human figure. Clayface was a giant polymorphic rock monster to most. But to Batman, he was a wounded man, alone. Mr. Freeze was a grieving husband. Scarecrow was a victim of his own reckless experiments. Even the Joker was, to Batman, more a giant mass of scar tissue that had suffocated a human being than he was some evil force. Batman understood that he was himself almost a Batman villain. The loss he suffered did not merely fuel his obsession. It fueled his approach. He saw himself in his villains. He was always willing to do the hard work of empathy, and to reckon just how closely he and they danced along the edge of the Abyss.

The Origin of Batman.

One of my favorite episodes is “Harley’s Holiday,” (S03E06) in which Harley Quinn is released from Arkham Asylum on probation. Through a series of comical mishaps, she gets caught up in and railroaded by the system because of her past criminality. Batman’s arc in the episode is not to capture or defeat Harley Quinn, but to save her from a probation violation. He believes utterly in her chance to do and be better. Her rehabilitation was just as important to him as her original capture. When she asks Batman why he worked so hard for her, to save her from her “really bad day,” he replies, “I had a bad day too, once.” He used his pain to understand hers.

And consider one of the more iconic episodes, “Appointment in Crime Alley” (S01E12) The villain is Roland Daggett, perhaps the only major villain of the series who never enjoyed a redemptive arc. He was not a wounded soul like Harley Quinn or Mr. Freeze; he was a corrupt and venal plutocrat. His plot was to demolish a neighborhood in time to deliver a speech before a zoning board, and, through graft and eminent domain, destroy a block of people’s homes, and the free clinic which served them. His goal was to profit from the redevelopment.

Batman races through the titular Crime Alley, a ghetto of struggling, working people menaced by Daggett’s cartoon thugs. He defeats them, as he must, each step bringing him closer to Daggett himself. In the course, those thugs threaten the intrepid social worker and recurring character Leslie Thompkins, who is arguably a dearer friend to Bruce Wayne and Batman than even Alfred. When Batman finally confronts Daggett, thugs in tow, snitching on the industrialist jerk, Daggett escapes in plain sight. He is untouched, shielded by wealth and privilege, and Batman damn near loses his temper and goes off to reduce Mr. Daggett to a smug-shaped pulp. It’s Leslie Thompkins who stops Batman in his tracks.

She reminds him that they have an appointment to keep, which was what brought Batman to that neighborhood that night in the first place. Their appointment is at the gravesite of Thomas and Martha Wayne. There, Batman lays two roses. He stands side by side with Ms. Thompkins, the social worker who held him all those years ago, when he was just a boy named Bruce, after his whole world shattered. Leslie has her own moment of doubt there, grieving the old days of Crime Alley, when good people lived there. But Batman reminds her, as she reminded him, when he was a boy: “Good people still live in Crime Alley.” As far as Batman is concerned, good people will always live in Crime Alley.

The Apotheosis of Batman

I also recently re-watched all three of Christopher Nolan’s Batmans. At the time, I didn’t think too much of them — literally. They were perhaps the loudest, most thumping and pounding of Nolan’s movies. I liked them pretty well for what they were, good entertainment, like standing at the well of a nightclub. There was so much noise and so many rapid jump cuts, you could never fix on a single point. On a technical level, they had strong and weak points. (Heath Ledger’s Joker really is a truly amazing performance, RIP.) But on a philosophical level, they were just thumping noise and trumpets.

In hindsight, I was overly kind to these movies. Nolan Batman is an angry, growling man. His pain is a wall he hides behind, peering angrily at the world. He seeks no understanding. He has no empathy. His villains are murderous, insane, and, to the narrative, all categorically beyond redemption. In Batman Begins, he even leaves Ras al Ghul to die in what the trademark Nolan musical sting suggested was a Nietzchean moment of mighty hero praxis. It wasn’t. He just left a man to die, not even because he was a bad man, but Nolan Batman was angry. That anger was presented as a counterfeit dollar, like it was virtue. It wasn’t. He just left a man to die. That’s not Batman.

So many moments of Nolan Batman are written like heroism, but they aren’t. At the end of The Dark Knight, Commissioner Gordon gives a truly bizarre, now infamously parodic speech about the constructed nature of heroism to his own son (“he’s the hero Gotham deserves”, and other such nonsense). His son is terrified, was just held at gunpoint by a mutilated psychopath. But Gordon just blithely delivers his speech, in which heroes are mere inhuman symbols for lesser people to hide and rally behind, whose conduct is immaterial, whose truth is irrelevant. This is not Batman.

Finally, The Dark Knight Rises ends with an utterly confounding action scene where a bunch of cops in dress uniform have a fistfight on the steps of a neoclassical bank-looking City Hall. They fight a ragtag band of extras who look like Occupy Wall Street protesters who spent a decade on the road with Rammstein. There is nothing of heroism in this. There is no redemptive desire, no moral stance. This is just people punching one another, each wearing abstruse costumes ripped from headlines and iconography, then reassembled like a letter from a hostage taker. This, too, isn’t Batman. 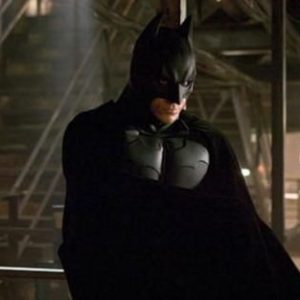 Batman — my Batman — occupies a moral space. He defends people, from criminals, and from themselves. His enemy is not the Riddler, or Bane. His enemy is the cruelty and destruction that produces Riddlers and Banes, and which goes on to keep them from redemption. He look at Harley Quinn not as a horrible menace, but as Dr. Harleen Quinzel, a clinical psychologist who he dearly hopes will return one day to sanity in full. His enemy is nihilism and vengeance, the idea and impulse that there exists a point at which reason and understanding fail, and people become monsters permanently. His enemies are the systems which produce those outcomes, which tie people to them, which reify pain and tie folks down. He hates noted philanthropist Roland Daggett, but he does not hate the Joker.

My hindsight is unkind to Nolan Batman, not because they were movies which didn’t age well. Rather, I dislike them in passing because they stole my Batman. They stole his ideals and better nature, then hid them with anger and loud noises and creeping protofascism. They made my Batman a Batman villain, and they never really sought to redeem him, like my Batman would. I see this thread in many current superhero movies, where violence and self-assured speeches and mere stagecraft take the place of humanity and empathy. It’s not a good look. Those movies made in that cast won’t age well, unlike my Batman.