[L1]: In light of the recent story in the national news about a young student’s refusal to recite the pledge of allegiance (which allegedly precipitated an altercation and arrest of the child) and the teachers in the Mountain State striking for the second year in a row, I thought it appropriate to revisit West Virginia State Board of Education vs. Barnett for our case of the week. The holding of the case is a very simple and very profound one: Students may not be required to recite the Pledge of Allegiance in public schools. 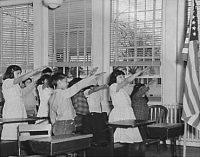 The case dates back to 1942, at which time all students in West Virginia public schools were required to recite the Pledge each school day, by edict of the state Board of Education. Notably, the law prescribed the manner in which the Pledge was delivered, including that the students’ right arms should be extended in “a stiff arm salute”, or the so called “Bellamy salute”. The disturbing similarity to the Nazi salute was cause for concern and concessions made as to form. However, when the Barnett family of Kanawha County, practicing members of the Jehovah’s Witnesses, refused to allow their child to participate in the Pledge, their children were expelled. Each day the family sent their daughters back to their grade school; each day, the children were sent home. Finally, the Barnetts filed suit in the United States District Court. At that time, the existing precedent was Minersville School District v. Gobitis, et al, which had already considered the issue and ruled that religious objection would not exempt a person “from obedience to an otherwise valid general law not aimed at the promotion or restriction of religious beliefs.” Nevertheless, the District Court in Barnett’s case ruled in Barnett’s favor, defying the Gobitis decision, prompting an appeal to SCOTUS by the Board.

In the two years between Gobitis and the Barnett case’s submission to the Supreme Court, the Court had seen the retirement of Justice Byrnes and the appointment of Justice Rutledge, which had already resulted in the overturning of one First Amendment case with a ruling favorable to free speech and freedom of religion. Justice Jackson, writing for a 5-3 Court in Barnett, noted that the holding of Gobitis was predicated on the right of “authorities” to employ whatever means deemed necessary to attain “national unity”, in the name of “national security.” But Jackson rejected the rationale:

As governmental pressure toward unity becomes greater, so strife becomes more bitter as to whose unity it shall be. Probably no deeper division of our people could proceed from any provocation than from finding it necessary to choose what doctrine and whose program public educational officials shall compel youth to unite in embracing. Ultimate futility of such attempts to compel coherence is the lesson of every such effort from the Roman drive to stamp out Christianity as a disturber of its pagan unity, the Inquisition, as a means to religious and dynastic unity, the Siberian exiles as a means to Russian unity, down to the fast failing efforts of our present totalitarian enemies. Those who begin coercive elimination of dissent soon find themselves exterminating dissenters. Compulsory unification of opinion achieves only the unanimity of the graveyard.

It seems trite but necessary to say that the First Amendment to our Constitution was designed to avoid these ends by avoiding these beginnings.

The Court then affirmed the District Court decision, overturned Gobitis, and in a ruling undisturbed to this day prohibited the forcing by a public entity of recitation of the Pledge of Allegiance. In a day and age in which one’s character and fealty are  increasingly judged by his or her willingness to salute or otherwise venerate the flag, the Pledge, or the Anthem, these words of Justice Jackson are worth pondering:  “To believe that patriotism will not flourish if patriotic ceremonies are voluntary and spontaneous, instead of a compulsory routine, is to make an unflattering estimate of the appeal of our institutions to free minds.”

[L2]: The full details of the child arrested following his refusal to stand for the Pledge can be found here; it is worth noting that there is more to the story than his initial refusal, and as usual, both sides look bad.

[L3]: As mentioned in L1, West Virginia teachers are on strike again. This time, the issue is not a pay raise or benefits, but Senate Bill 451, which creates charter schools and Education Savings Accounts.

[L4]: The Supreme Court has released its spring calendar. Among the cases the Court will hear are those involving statutes of limitations when a prosecutor fabricates evidence; the applicability of California labor laws to offshore rigs; the meaning of “confidentiality” in FOIA requests; and a line of clothing that’s FUCT.

[L5]: Note to lawyers: when your spouse interrupts your deposition to ask if you’ve taken the trash out, you may want to consider not holding depos in your dining room.

[L6]: Mechanical pencils and other LSAT contraband: how the future partners of Dewey, Cheatem, and Howe try to cheat law school entrance exams.

[L7]: Uber is fighting a subpoena to turn over customer records, in an ugly custody case involving a former South Carolina state treasurer and his reality show co-star and soon-to-be-ex wife.

[L8]: A district court judge in Washington State threw out a handful of criminal charges when it came to light that the San Juan County Sheriff was using the courtroom camera to zoom in on defense counsel’s notes and exhibits.

[L9]: When Haley Moss was three, she was diagnosed with autism and given a bleak prognosis for ever being productive or living independently. Last week, she was sworn in to the Florida Bar.

[L10]: William Barr has been sworn in as the US Attorney General. And it came with a sweet White House Counsel’s Office gig for his son, too.

[L11]: Our dumb criminal of the week is Roger Stone. How could it not be? From his refusal to shut up to his ill-advised, to be nice about it, tweet regarding the judge in his case, he seems almost self-destructive at this point.

[L12]: In honor of the striking teachers in West Virginia (and across the country over the last year), here’s a YouTube playlist of the best “Union songs”, including this one: