There’s a story in Marco Polo, possibly apocryphal, about the “old man of the mountain”, Ala’u-‘d-Din Muhammad, one of the last rulers of the Nizari Ismailis, a heretical offshoot of Shiite Islam.  In the story, Ala’u-‘d-Din creates a secret garden where young men are brought after being drugged, in order to indoctrinate them into his order of assassins:

“he had formed a luxurious garden, stored with every delicious fruit and every fragrant shrub that could be procured. Palaces of various sizes and forms were erected in different parts of the grounds, ornamented with works in gold, with paintings, and with furniture of rich silks. By means of small conduits, streams of wine, milk, honey, and some of pure water, were seen to flow in every direction.”

The garden was hidden and unreal and artificial, but it gave the young men the illusion that they’d seen paradise and could return there by serving Ala’u-‘d-Din. 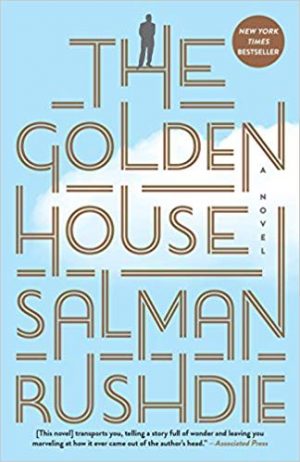 I thought of this story while reading The Golden House by Salman Rushdie, a novel that centers in the enclosed garden square behind a row of expensive homes in downtown Manhattan where residents can all watch each other’s lives as if it was their own private proscenium. It is a fantastic image, which Rushdie has called the initial seed for his story: a private enclosed theater for the privileged tenants: The author notes: “It also had a Rear Window quality, of being able to spy on everybody else’s lives.”

This little cloistered microclimate is unbalanced by the arrival in the story’s opening of one Nero Golden, a billionaire from Bombay, and his three sons: Petronius or Petya, Dionysus or D, and Apuleius or Apu. The names should be a clue that the father is enamored with the “Classical world” and the “Western tradition” and that these are assumed names, new identities. Rushdie uses the older “Bombay” instead of the assumed name “Mumbai”. The Golden family are a bit artificial themselves. They are, as Nero puts it, “snakes who have shed our skins”. America is depicted as a changeful place where new personas can be constructed and the present day as a time in which identities are in flux. Rushdie complicates the picture however.

Much will likely be made of the D character’s gender confusion, an area in which I think Rushdie proves highly sympathetic, both towards the character and towards letting people work things out for themselves. Everyone in the story seems to be working out who they are and how that relates to who other people think they are. His view seems to be that identity is a damned hard business and it is Nero’s attempts to escape his old identity in Mumbai, following the 2008 bombings, that dooms the family more than anything else. But doomed they are.

Much will also be made of the framing of the story between the election of “the new president” Barack Obama and the successful election campaign of a candidate who Rushdie describes only as the Joker from Batman. It’s a “timely” book; but I’m not sure Rushdie meant the last election to be central to the story- it’s treated in the text more as background noise. Nor is it particularly surprising given the larger context. The hints are all there and the greater themes are the inescapable power of corruption and the difficulty of maintaining loyalties and self hood in a time in which the center seems to be doing anything but holding. Timeless themes, in other words.

So it’s a tragedy with all of the terrible inevitability of the genre. People make bad choices and make more bad choices trying to escape the consequences of them, ultimately paying dearly. There are echoes of Gatsby and Appointment in Samarra and a hundred other stories. Rushdie impresses me as having the same rare ability as Milan Kundera to use his immense erudition in a way that enhances the story without being showy or derailing the narrative altogether. It’s a tricky balancing act that most writers can’t pull off. I don’t think I can yet. You want to honestly reveal the character’s inner world, but most of us have dozens of references rattling around there, so you don’t want to dumb it down by having them thinking about nothing but whatever’s closest at hand. Rushdie’s narrator is an aspiring filmmaker, so I admittedly could have used a few less film references, but otherwise the story flows.

Rushdie also pulls off the trick of grounding the story in a specific time and place without that derailing the narrative by making it a thesis statement on current events. I cringe to imagine all the fiction we’re going to be reading about our politics in the near future. In general, most of us are more often self-conscious than really self-aware. Rushdie spares us too many theses and, instead, depicts a world that seems to be going mad; but he reminds us that it has gone mad many times before and he offers a dim hope of recovery.

So, friends, what are YOU reading, watching, pondering, or playing this weekend?