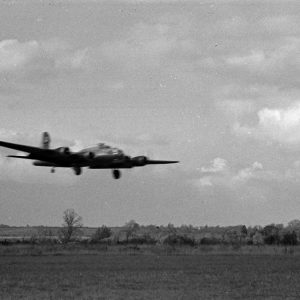 [L1]: In 1946, North Carolina farmer Thomas Causby sued the United States government over his suicidal chickens. It seems Mr. Causby’s fowl had a habit of running frantically headlong into the side of the barn, killing themselves, and the cause was US military planes flying in to land at the nearby municipal airport. The planes passed over the farm so low- a mere 67 feet above the top of his house- that the landing lights would light up the property at night and the winds from the aircraft could blow leaves off of the trees. The noise and lights caused the chickens to panic, fly into walls and kill themselves, and eventually led to the end of the farmer’s commercial chicken production. Mr. Causby filed suit for damages to his business and property in the now-defunct US Court of Claims, claiming that he owned the airspace above his property and that the airplanes had been trespassing and caused his losses. The Court of Claims ruled that the government had essentially taken an easement over Causby’s property, and awarded the farmer $2000 for damages.

The government appealed, in the matter of United States v. Causby, our Case of the Week.  In analyzing the issue the Court first recognized the common law principle of cujus est solum ejus est usque and coelum – that ownership of land extends to the edge of the universe. This argument was summarily dismissed as being untenable in light of modern air travel, because it would give rise to thousands of trespass claims every day. The government maintained that it owned all airspace, from the sky to the ground. But the Court, in a 5-2 opinion written by Justice Douglas (with one justice not participating and another having recently died) agreed with Causby that the intrusion and interference with the use of his property constituted an unlawful taking under the 5th amendment, such that he should be compensated for the loss of value. But the Court found that the record was devoid of specific details of the easement the flight path had created, and sent the case back to the Court of Claims for a more definitive description and a recalculation of damages.

This case is still important after 70-plus years, as courts grapple with the use of drones, both public and private, are likely to occupy the space between that which could reasonably be the dominion of aircraft and the dominion of the landowner.

[L2]:A family in Texas becomes one of the first to utilize David’s Law, filing a lawsuit over the bullying of their son after he was voted “Most Likely to Shoot Up the School.”

[L3]: Baltimore becomes one of four cities to decriminalize pot possession, even though their respective states have not.

[L4]: SCOTUS continues its recent trend of rulings which favor abortion rights, if only temporarily, by staying the  implementation of a Louisiana law that would tighten restrictions on abortion providers. Roberts joined the liberals in the 5-4 vote.

[L5]: The Google WAZE app alerts users to speed traps and DUI checkpoints- and the NYPD is not pleased. The Departement sent Google a cease and desist letter, threatening legal action if the service was not removed.

[L6]: Jason Van Dyke, the Chicago PD officer convicted of second degree murder in the shooting death of Laquan MacDonald, was recently sentenced to only seven years. The prosecutor, along with the Illinois attorney general, filed a petition on Monday challenging the lenient sentence, on the grounds that the judge failed to impose any sentence for other crimes for which Van Dyke was convicted.

[L7]: Teachers in Denver walked out of the classroom this week in a strike over wages. It is one in a recent string of teacher strikes across the country, beginning with a two week walk out in West Virginia last winter and one in Los Angeles last month.

[L8]: A lawyer in Oklahoma shut down a court house when he showed up for court quite literally crawling with bed bugs. The critters were reportedly falling out of his clothing.

[L10]: ICYMI last week, this man’s hilarious and blatant attempt at insurance fraud earns him our dumb criminal of the week award. Behold: