[ThTh1] One of the big pieces of news in recent weeks was the release of the EAT-Lancet report on “Food in the Antropocene”. It proposes massive limitations on meat (down to one serving a week) and a host of other policies. You can read a positive spin from Vox and a mores skeptical view from Reason. As you can probably guess, I lean toward the skeptical view (I’ve previously written criticisms of environmental doom-mongering and the only thing Malthusian predictions have had in common is being completely wrong). But I want to put a pin in this one before I address it head on. There are a lot of rumblings about errors in the report and the referee process. Glancing over it, I’m not finding a lot of attention to the fact that we are feeding more people on less land than we have in recent decades. Nor do I see any references to GMOs, which may hold the key to improving crop yields while cutting fertilizer use. I suspect this study is going to turn out to have a lot of issues. So I want to wait until people more knowledgeable than I weigh in.

[ThTh1.5] The speculative nature of EAT-Lancet has not, of course, deterred anyone from doing junk science in its name.

[ThTh2] Did it feel cold last week? It was. In fairness, “temperature” is a bit of a slippery concept. While parts of Mars were technically “warmer” than Earth last week, the air is so thin you would freeze to death.

High temps today across Canada and the upper midwest of the US didn’t reach Mars last reported high. pic.twitter.com/Zg0REwm8PI

[ThTh3] Is social media creating a “suicidal generation”? Nope. Suicide rates among young people are thankfully low (they are highest among seniors). So they vary a lot as a percentage. Some researchers did a standard junk science trick — picked the lowest rate of suicide in forty years as their starting point and then claimed an increase. Similar tricks have been used to deny global warming, to claim that gun control laws work and to claim we are in the midst of a “War on Cops“.

Here, by the way, is the suicide rate among 15- to 19-year-olds from 1981 to 2017 which, apparently, shows a "suicidal generation". The ST piece chose the lowest point on the graph to start its measurement from, hence the scary-sounding rise. pic.twitter.com/aSN66QpqBY

[ThTh4] Do gut bacteria cause depression? I would interpret this one with caution. The finding is that gut bacteria can produce neuroactive compounds. But “depression” covers a fairly broad range of conditions so while gut bacteria may be a factor, they’re unlikely to be the cause. That having been said, we continue to discover that our body’s bacteria are far more important to us than we used to think.

[ThTh5] Oscar mentioned this one last week: does gum disease cause Alzheimer’s? This is another case where the headlines are getting ahead of the science. We have found bacteria connected with gum disease in the brains of Alzheimer’s patients. But this does not mean causation. It may be that the conditions that lead to Alzheimer’s (or come out of it) are correlated with the spread of the bacteria.

[ThTh6] Speaking of Oscar, he asked if I would get into a couple of links. This one, on the “missing light” in the Hubble Ultra Deep Field gets into some very technical issues. To explain briefly: any image you see coming out of the astronomy community is usually a combination of multiple images taken over a long time. How you combine those images into the final image is … complex and a source of great debate. The math can change depending on what exactly you’re looking for. In this case, they wanted to enhance the faint light in the outskirts of distant galaxies. 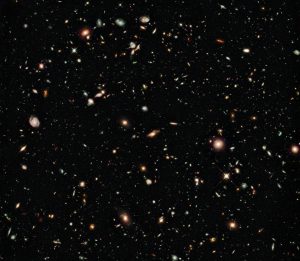 [ThTh7] The other link he asked about was this one about the ALMA array finding the black hole in the center of our galaxy. We’ve long known that the center of our galaxy, like many other galaxies host a massive black hole (about 4 million times the mass of the Sun). But black holes are … black. We’ve only been able to detect it by the effect of its gravity on nearby stars. Black holes do give off light, however, when they gobble things up. Sagittarius A* has pushed back from the table for the last few decades but ALMA was sensitive enough to detect some very low-level digestion of material, giving us the first picture of the black hole — or, more accurately, the accretion disk of material spiraling into it.

[ThTh8] We’ve also known for a while that the disk of our Galaxy is warped. But now we’re getting into really fine details of its structure, which will tell us more about its past.

[ThTh9] I haven’t talked much about Global Warming here, so I’ll reiterate my position: global warming is real, we are almost certainly causing it, it is likely to be bad, all we can do right now is fight delaying actions until technology catches up to the problem. One of the ongoing efforts in climate science, however, is trying to figure out the secondary and even tertiary effects of climbing temperatures. This is important because we are basically conducting an irreversible geo-engineering experiment. But it’s also fraught because the further you get from the temperature record, the less your research is based on hard data and the more on speculation. A perfect example: a study this week that predicted a spike in congenital heart defects due to global warming. The logic is that there is a tenuous connection between maternal heat exposure and heart defects, therefore warmer temperatures equals more heart defects. But this is building a pyramid on speculation. The link is still debated and there is an assumption — common in discussions of global warming — that people will not adapt or migrate. So while it’s interesting, it is also highly highly speculative. (I would add that the swipe at Donald Trump in the first paragraph of the story is complete unnecessary and distracts from the point).