[L1]: In Scottsboro, Alabama in 1931, 9 young black men and boys (the youngest being 12 and the oldest 19) were removed by an angry mob from a train car, accused of assaulting a group of white boys while illegally “riding the rails”. The black boys were Haywood Patterson, Clarence Norris, Charlie Weems, Andy Wright, Roy Wright, Olin Montgomery, Ozie Powell, Willie Roberson, and Eugene Williams. The authorities also found two young white women, Victoria Price and Ruby Bates, who were willing to accuse the boys of raping them (Bates later recanted). The arrests occurred on March 25; by March 31 all 9 had been indicted, and the trials began a week later. None of the boys were permitted to meet with an attorney prior to the trials; in fact, none of the boys had any representation until the morning of trial. Instead of appointing each boy his own attorney, the judge appointed “the bar” generally, with a real estate lawyer out of Chattanooga assisting in an “amicus curiae” capacity. Finally, one lawyer, who had not defended a criminal case for most of his career, volunteered to help.

Eight of the 9 boys were convicted in three separate trials, and all 8 of them were sentenced to death. Only the youngest was spared when the judge declared a mistrial.  Following the convictions, there began a national campaign and legal battle to exonerate and save the condemned, who had become known as the Scottsboro Boys. The boys’ plight made it to the Alabama Supreme court and then to the Supreme Court of the United States in Powell v. Alabama, our case of the week. 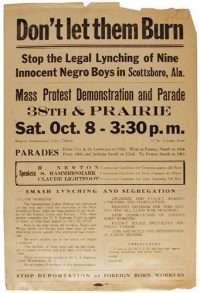 Flyer by the ILD in support of the boys.

Following the swift convictions of the 8 boys in the Alabama state court, their cause was taken up by an unlikely group: the Communist Party USA, whose legal arm, the International Labor Defense (ILD), was soon joined hesitantly by the NAACP. The execution dates were set for July of 1931, but the group was granted a stay as attorneys George Chamlee and Joseph Brodsky appealed the boys’ cases to the Alabama State Supreme Court.  The defense argued to the state high court that the boys did not receive a fair trial because they had been denied adequate assistance of counsel and time to prepare a defense, that their jury was intimidated by outsiders, and that the exclusion of blacks from the jury was unconstitutional. The state Supreme Court found no violation of due process as to any of the defendants. 7 of 8 verdicts were affirmed; the youngest boy was granted a new trial due to his age, deemed too young to face the electric chair. One of the court’s justices, John C. Anderson, dissented, decrying the haste with which the case was brought to trial.

The case then went before the US Supreme Court in October of 1932. The opinion, written by Justice George Sutherland, contained this excerpt from the trial transcripts, concerning the appointment of counsel:

“The Court: Well gentlemen, if Mr. Roddy only appears as assistant that way, I think it is proper that I appoint members of this bar to represent them, I expect that is right. If Mr. Roddy will appear, I wouldn’t of course, I would not appoint anybody. I don’t see, Mr. Roddy, how I can make a qualified appointment or a limited appointment. Of course, I don’t mean to cut off your assistance in any way — Well gentlemen, I think you understand it. ”

“Mr. Moody: I am willing to go ahead and help Mr. Roddy in anything I can do about it, under the circumstances.”

“The Court: All right, all the lawyers that will; of course, I would not require a lawyer to appear if – ”

“Mr. Moody: I am willing to do that for him as a member of the bar; I will go ahead and help do anything I can do.”

Said the Court of this exchange: “And in this casual fashion, the matter of counsel in a capital case was disposed of.” The Court went on to rule in a 7-2 decision that the boys had been denied their right to counsel, and held that “[T]he right of the accused, at least in a capital case, to have the aid of counsel for his defense, which includes the right to have sufficient time to advise with counsel and to prepare a defense, is one of the fundamental rights guaranteed by the due process clause of the Fourteenth Amendment.”

The high court victory was not the end; the cases were sent back for retrial, resulted in convictions again, and came back before the high Court once more. There was no happy ending for the Scottsboro Boys; though none received the death penalty, they nevertheless spent years in prison. There are many more details and twists to this case than I can fit here in the Writs, and I highly encourage you to read more about the case. Detailed information about each of the boys and what happened to them can be found here.

[L2]: In further recognition of Black History Month, read about seven African Americans who have had an important influence on the law.

[L3]: After a trial that lasted 2 and a half months and involved 56 hours, the fate of Joaquin Guzman Lorea is in the hands of the jury. You may know him better as “El Chapo”.

[L4]: A panty-stealing lawyer has been indefinitely suspended from the practice of law. Oh, and he’s a former prosecutor, too.

[L5]: Anytime a restaurant puts up a sign informing customers that their children are not welcome, the resultant social media commentary is split between angry parents and those who want to eat in peace. But, are these “bans” legal? What if they’re really loud kids?

[L6]: The 9th Circuit ruled in favor of the American Beverage Association in ruling the San Francisco ordinance requiring health warning labels on sugary drink ads a First Amendment violation. The Court based its ruling on the the law’s requirement that the warning take up 20% of the ad space.

[L7]: The Arkansas Supreme Court blocked a Fayetteville city council ordinance prohibiting discrimination against LGBTQs, reversing a lower court which had denied an injunction, based on an Arkansas law prohibiting individual counties and municipalities from enacting their own anti-discrimination laws.

[L8]: Florida court rules that unregulated sales of bitcoin may be prosecuted, finding that one such defendant was in violation of state law by not being a registered “money services business”.

[L9]: Turns out Ben and Jerry’s, the hippy ice cream, may not be the environmentally conscious product it seems to want us to believe it is, according to a lawsuit over false advertising.

[L10]: A partial power outage left inmates at a Brooklyn jail without heat or electricity during last weeks frigid, single digit temperatures, and the lawsuits have begun.

[L11]: 21 Savage, a rapper who purports to have grown up on the tough streets of Atlanta, was arrested this week- by ICE agents. Turns out, he’s from the UK. He came to the states as a teen and overstayed his VISA. In homage, I present to you his opus,  “Break Da Law” (warning: bad words.)