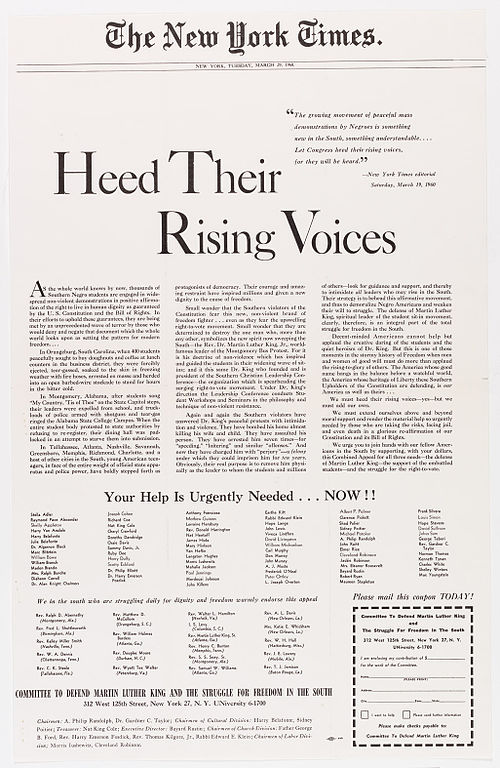 [L1]: In honor of Dr. Martin Luther King, Jr. and the week in which we celebrate his birthday, our case of the week is one of which he was at the center. The year was 1960, and the strife of the civil rights movement raged particularly strong in the south. In Alabama, Dr. King often found himself at odds with local authorities, having being arrested several times and facing criminal charges. On March 29th of that year, the New York Times ran a full page advertisement, titled “Heed Their Rising Voices”, seeking donations to fund Dr. King’s legal defense. The advertisement contained the names of many celebrities, including prominent black celebrities such as Sammy Davis Jr., and Eartha Kitt, and was endorsed by 16 members of the clergy from the south.  The ad described the turmoil in the south, the efforts of the protesters and the actions of law enforcement in response.

But according to L.B. Sullivan, one of three Montgomery City Commissioners, the ad had several inaccuracies and while it did not mention Sullivan in person, he believed the actions described were attributable to himself. The inaccuracies included the erroneous statement that Dr. King had been arrested 7 times, when it was actually 4; that protesters sang ‘My Country Tis of Thee’ on the steps of the state capitol, when it was actually the National Anthem; and that the Alabama State College campus had been “ringed” by “truckloads” of police in response to the demonstration at the capitol. Sullivan, alleging that statements implicating “the police” necessarily referred to him because of his role as the supervisor of the Montgomery Police Department, filed suit against the NY Times for libel. Sullivan was eventually awarded $500,000 by an Alabama jury, which was affirmed by the state supreme court on appeal. The Times took the fight to the United States Supreme Court, and New York Times v. Sullivan became a landmark case on libel and the freedom of the press.

The Court ruled 9-0 in favor of the paper in a decision penned by Justice Brennan. The case established the actual malice standard for libel cases in which the subject of the libel is a public official: “…the First Amendment protects the publication of all statements, even false ones, about the conduct of public officials except when statements are made with actual malice (with knowlege that they are false or in reckless disregard of their truth or falsity.” Further, said Justice Brennan, the “erroneous statement is inevitable in free debate, and… it must be protected if the freedoms of expression are to have the ‘breathing space’ that they need to survive”.

[L2]: In a lawsuit filed by the ACLU of Missouri, the state is violating the right-to-counsel due to its shortage of available public defenders and its refusal to increase funding. The 8th Circuit says the government is immune from the suit. Missouri spends an average of $355 per indigent defense case- or roughly the hourly rate of private counsel.

[L3]: The US Supreme Court rejected a challenge to the appointment of acting US Attorney General Matthew Whittaker on the grounds that his appointment was not confirmed by the Senate. The Court said that while the attorney general position is subject to confirmation, an “acting” official is not, because it is not a “continuing or permanent position.

[L4]: Justice Brett Kavanaugh wrote his first opinion since taking the bench in October, and it’s a doozy of a snore about arbitration.

[L5]: One-hundred years to the day that prohibition became the law, the Supreme Court heard arguments in a booze dispute out of Tennessee. The issue is whether Tennessee may prohibit out-of-state retailers from selling in the state.

[L6]: In a serious case of throwing good money after bad, a California lawyer who battled all the way to the state court of appeals to avoid paying $300 to a former employee says the lawsuit has cost him nearly $100,000.

[L7]: Also out of California, the state Appellate Court ruled that imposing fines against indigent defendants is unconstitutional. The criminal case underlying the decision was a woman convicted of multiple counts of misdemeanor driving on a suspended license. The defendant, a homeless and disabled woman who could not afford the fines, was driving her children to school or going to work. She was ordered jailed for non-payment.

[L8]: In what can only be described as a niche area of law, taxidermy is, it turns out, highly regulated. Check your local laws before you have your beloved cat stuffed. And do not throw away that stuffed bird.

[L9]: Slap a hippo, go to jail: our dumb criminal of the week thought spanking a baby hippo would make for a funny video, and became the subject of an investigation by the LAPD. No one told him hippos kill more people than any other animal in the world, save the mosquito; watch the Darwin contender here:

President Biden made his first prime time address to the nation after signing the latest Covid Relief Bill that marked his administration's first major legislative accomplishment.