Popcap used to be the absolute best little puzzle-y game company out there. They made flash games like Zuma’s Revenge, Chuzzle, Peggle, a whole buncha games that were fun to load up in a browser and play for 5 minutes… and the flash games were pretty much commercials for the real downloadable version that had better graphics, extra levels, all sorts of bells and whistles that were worth the 10 bucks for the downloaded version of the game. (Plants vs. Zombies! Insaniquarium! Bookworm!)

Well, Popcap got bought by EA and that was pretty much the end of that. Plants vs. Zombies 2 was mobile only and it was intended to be a “pay to win” game. Garden Warfare was a cute plants vs. zombies-inspired game that was kinda like Team Fortress 2. But, pretty much, Popcap is dead.

BUT! The people who made those brilliant Popcap games are still around and still making games in their own studios.

During the recent Steam Sale, I picked up Octogeddon and, holy cow, it reminds me of the heyday of Popcap.

Here’s the conceit: You are an octopus who is sitting at home and enjoying some screen time watching the shows made by the land people. Suddenly, something comes up that infuriates you and IT IS TIME FOR REVENGE! So you go out and start destroying the symbols of the land people. Like, after you see an NYC cooking show where a sushi chef chops up an octopus, you go to destroy the Statue of Liberty.

The gameplay is simple: In the ocean levels, you are the octopus in the middle of the screen. In the land levels, you roll down the street to get to the landmark you want to destroy. You rotate/roll your octopus with either the arrow buttons or the mouse buttons. Clockwise and counter-clockwise. You attack the land people with your tentacles.

The hook is that you can upgrade your tentacles. You aren’t limited to the paltry melee tool that slaps a submarine a couple of times to destroy it. You can swap it out for a viper that spits poison by buying it in the shop. Not just vipers, there’s a lot more to get. A chicken that spits exploding eggs! A lobster claw that does massive damage to anything that it can grab! A killer bee that sends out guided stinger missiles! 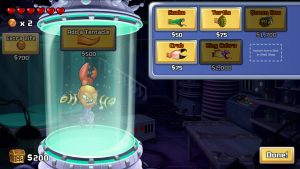 You start out with two tentacles but you can buy more tentacles as you destroy the land peoples’ various ships they send against you (and, after the game over screen, you can buy upgrades for the game like “start with three tentacles” or “start with more cash” and so future games will have you in better starting positions to help you get further next game.

Made by some of the people that made Popcap great, once upon a time. If you remember Popcap fondly, you should give this one a chance.

(Featured image is a screenshot of the game taken by the author.)