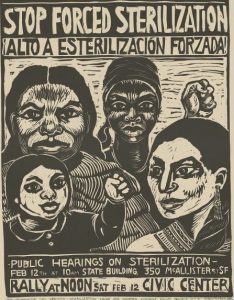 [L1]: Most of the well-informed readers of this blog are familiar with Buck v. Bell, a travesty of a Supreme Court decision in which Virginia’s eugenics law, allowing the forced sterilization of the intellectually disabled and other “unfit” persons, was deemed acceptable, from a constitutional standpoint. The case has never been overturned, though the threat of litigation caused the number of physicians willing to perform the procedure without patient consent to decline over the next fifty years. But in 1971, the mother of a 15 year-old girl named Ida submitted a petition to an Indiana Judge, seeking permission to have her daughter, whom she described as  “slightly retarded”, sterilized without the girl’s knowledge.

Without a hearing, the appointment of a guardian ad litem for the girl, or any further inquiry, Judge Stump signed the petition the same day. Under the guise of an appendectomy, the girl was sterilized the following week. She found out two years later, after she married and tried to conceive. When Ida learned what happened to her, she filed a lawsuit against her mother, her mother’s lawyer, the doctor, the hospital, and the judge, giving rise to our case of the week. The suit was a “1983 action”, which alleges deprivation of rights under color of law. The District Court dismissed the case in its entirety, finding that the only defendant subject to the 1983 action was the judge, who, the Court ruled, enjoyed judicial immunity from the suit.

The Court of Appeals reversed, finding that the judge had acted outside of his authority and could not rely on immunity to shield him from his “failure to comply with elementary principles of procedural due process.” The judge appealed to the US Supreme Court. The case, Stump v. Sparkman, would be a landmark case--not for reproductive rights, but for judicial immunity. The Court ruled 5-3 in a 1978 decision that the judge was within his jurisdictional authority to rule on the petition, and thus could not be held liable for his ruling, even if it was in error, even if the consequences were tragic. In fact, said Justice White writing for the Court, the more controversial the issue before a judge, the more important it was for the judge to be immune from liability for the consequences of his or her decision.

[L2]: An assistant district attorney showed up for court drunk and unprepared to go forward in a hearing. As a result, the defendant, a confessed child molester, had all charges dropped, with prejudice, on speedy trial grounds.

[L3]: In a symbolic victory, the parents of Otto Warmbier are awarded a half-billion dollars in their lawsuit against North Korea for the torture of their son, which resulted in his death. While chances are nil that North Korea, who did not respond to the suit, will honor the default judgment, the result is nonetheless a powerful statement.

[L4]: A sentence that would have been a head-scratcher a few years ago: lawyers for the Russian troll farm, Concord Management, quoted Animal House in its latest pleading to the court presiding over special counsel Robert Mueller’s indictment of the company for conspiracy against the United States. “You f***** up,” writes counsel Eric Doubelier, quoting Otter, the ladies’ man of Delta Tau Chi.

[L5]: On the heels of a year in which law enforcement broke new ground in the use of familial DNA to solve cold cases, Bloomberg advises the public to think twice about privacy concerns before submitting their samples to commercial DNA and genealogy companies.

[L7]: A federal judge in Oregon confirms that a man with a degree in engineering is allowed to call himself an engineer, even if the Oregon Board of Examiners for Engineering and Land Surveying has not given him a license to do so. (H/T to Oscar Gordon for the link.)

[L8]: In case you missed it, Cyntoia Brown, the woman sentenced to life in prison at age 16 for shooting the man who bought her for sex, was granted full clemency by the governor of Tennessee. Prior to the shooting, the young woman reportedly lived a life of sexual slavery and abuse, prompting the campaign for her freedom.

[L9]: A middle school teacher who made headlines for feeding a live puppy to a snapping turtle in front of his students was acquitted of animal cruelty charges.

[L10]:How about a gutsy criminal of the week, instead of a stupid one? This burglar asked his victim for a ride, and got it.

[L11]: Finally this week, my number one choice for favorite scene from a lawyer movie: this one from A Time to Kill (bet you thought it would be To Kill a Mockingbird, huh?). The twist at the end here caught my breath the first time I saw it. But not only does it make a devastating point, it also depicts a masterful closing argument, which, in real life, would undoubtedly reach a jury in a way most lawyers dream of:

Best Closing statement ever (A Time to kill 1996)
Share