Trump’s Re-Election Numbers Look Bad Two Years In, But So Did Other Presidents 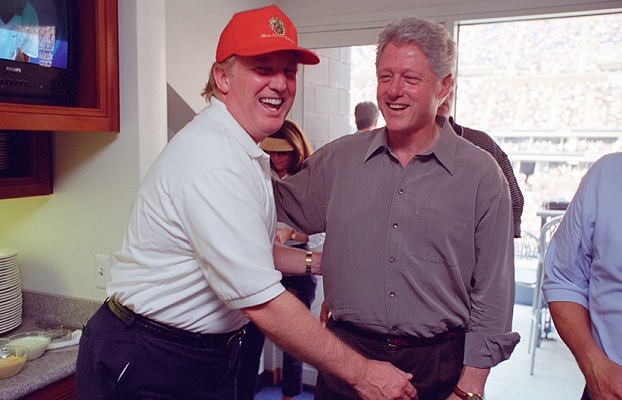 Donald Trump and Bill Clinton share more in common than just the presidency. They also both looked like one-term presidents half way though their first terms. Photo courtesy of the William J. Clinton Presidential Library.

The increasingly insatiable, largely media-driven appetite for electoral polling was obvious in a February 2017 national survey conducted by Morning Consult, on behalf of Politico. Question number six of nearly sixty asked voters whether they would support Donald Trump or the Democratic nominee for president in 2020. The following month, Public Policy Polling tested Trump in head-to-head match-ups against a number of likely 2020 Democratic contenders. Before the ink on his inaugural speech dried, pollsters were in the field, and asking voters their thoughts on hypothetical scenarios still four years out. And since then, the pace of such polling has increased. But how accurate are these various measures of presidential re-election odds this far out from the next presidential election? More importantly, how are these odds measured?

The various means to test a president’s re-election odds can be roughly broken down into three categories:

Now that we know what measures we’ll use to examine the likelihood of a president’s re-election, lets consider how accurate the measures were at similar points in past presidential election cycles. We’ll start with the generic ballot test.

The generic ballot question has been asked fifteen times by various pollsters since the start of the Trump presidency, and he has trailed his unnamed Democratic opponent in all of them, by as little 3 points (as found by Rasmussen) and by as much as 16 points (as found by NBC/Wall Street Journal). Overall, Trump trails a generic Democratic opponent by an average of 47-37%. That’s a larger deficit than any of his predecessors at a similar point in their first term dating back to George H.W. Bush. Compare Trump’s generic ballot performance with former President Obama. From January 2009 through January 2011, Obama tied his unnamed Republican opponent 44-44% across eleven surveys, leading by as many as three points, and trailing by as much as five. Consider the table below for further generic ballot comparison to past presidencies. 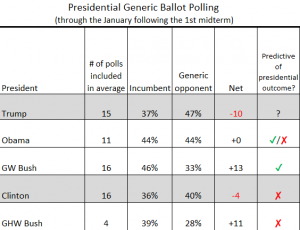 Though Trump is in worse shape by generic ballot standards than all of his predecessors dating back to George H.W. Bush, the generic ballot itself hasn’t been all that accurate in predicting presidential outcomes. In 1996, President Clinton won re-election by 9 points, though he trailed a generic Republican an average 40-36% through the first two years of his term. In 1992, President Bush lost his re-election battle by six points, though you hardly would have guessed it from the (very limited) generic ballot polling in his first two years in office. And while George W. Bush did win re-election, it was not by the impressive margin indicated from polling in his first two years in office. So while Trump’s deficit against a generic opponent is the largest since at least Bush 41, trailing at this point on the generic ballot does not preclude a 2020 win.

Just as unhelpful at predicting presidential outcomes, if not more so than the generic ballot, is the question of whether or not the president deserves re-election, or some variation of it. Pollsters began asking this question with regularity early in a president’s first term only recently. This measure of examining presidential re-election prospects was predictive of the outcome only once, for George W. Bush. Americans said W. deserved re-election by a 50-35% margin two years into his presidency. He ultimately won by two-and-a-half points. In contrast, Americans said Barack Obama did *not* deserve re-election 47-42% after the first two years of his presidency. However, he went on to win by a similar margin. A majority of voters also said Clinton did not deserve re-election in 1993-1994, though he went on to an electoral landslide. George H.W. Bush was also favored for re-election for his first two years in office, though ultimately lost. The ‘deserves re-election’ question has been asked 8 times since the start of the Trump Presidency, and an average of 37% of poll respondents say he deserves re-election; 58% say he does not. That is a worse net result for this question than for his four predecessors. 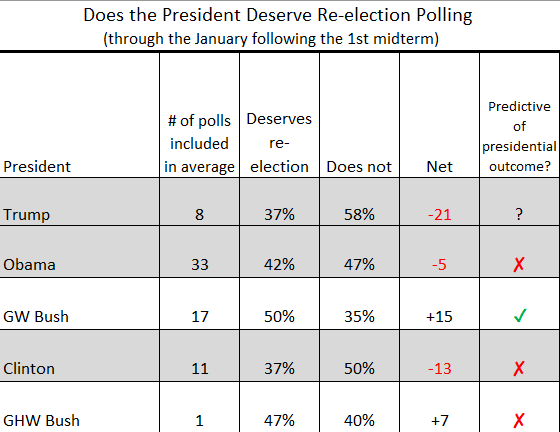 The most predictive of the various measurements for gauging Trump’s 2020 re-election odds is number three mentioned in paragraph two – the horse-race questions featuring an actual, named challenger from the opposing party. Unsurprising given the sheer number of Democrats considering a presidential run in 2020, Trump has already been polled against twenty-five potential challengers, more than any other president at this point in their presidency. He has a losing average against 72% of them. President Trump averages 39% against his combined 23 named Democratic challengers. The named Democratic opponent averages a combined 41%. This is the first time dating back to the Reagan Presidency that the incumbent president trailed, on average, his combined, named opponents in presidential polling during the first two years in office.

Compare these numbers to Trump’s immediate predecessor. Barack Obama averaged a 46-36% advantage over the twenty-one combined Republican opponents he was polled against in the first two years of his presidency, and he had a winning percentage against ALL of them (vs. Trump’s current 28% winning percentage). Not one of the twenty-one potential challengers Obama was polled against averaged a higher percentage than him. The same is true for both President Bushes. Bill Clinton’s horse-race polling through January 1995 most closely resembles Trump’s situation today, though still not quite as negative. 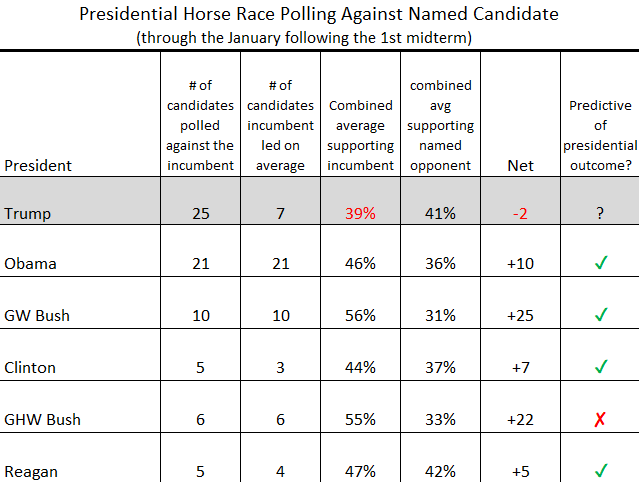 What does all of this data tell us about the 2020 presidential outcome? Not nearly as much as it tells us about where Trump stands in comparison to his predecessors. First of all, it’s important to keep in mind the incredibly small sample size we’re dealing with (just 4-5 presidential elections). The lack of data from a larger number of elections makes making predictions off the limited numbers we have precarious. But other than that, the data is a bit of a mixed bag for Trump. The good news for supporters is they have ample evidence to argue that negative re-elect and generic ballot numbers in the first two years in office do not preclude a president from winning re-election (see Barack Obama and Bill Clinton), while positive re-elect and generic ballot numbers do not necessarily translate into winning re-election (see George H.W. Bush).

On the other hand, while other presidents have faced deficits against a generic opponent, none have trailed by as much at this point in their presidency as Donald Trump, dating back to at least Bush 41. And while other presidents have faced a net negative “deserves re-election” at this point in their presidency, none were as negative as this president’s. Trump also has the distinction of being the first incumbent president dating back to at least Reagan to earn less than 40% on average against his named opponents, combined. He also has a losing average against more potential opponents than any president since at least Ronald Reagan.

In spite of all of this, Trump very well could still win re-election. But it is worth noting that early indications are he is starting off from a weaker position than his last five predecessors. Even more concerning is that presidents like Reagan, Clinton, and Obama could blame a poor economy on their initial poor re-elect numbers. What is Trump’s excuse?