Some Thoughts on an Occasion of Sudden Death

Her name was Amy and I first met her in 7th grade. I liked her; everyone did. She was friendly and cheerful and liked to laugh. She was prone to good-natured “teasing”, which could sting sometimes, but I would call her a friend. I didn’t sleep over at her house or hang out with her outside of school, but she was a friend. I never saw her again after graduation until last year at our 20 year class reunion; we weren’t the kind of friends that warranted staying in touch. She had not changed a bit; stick thin, blonde, with pointed features, big teeth and a squeaky voice. Cheerful, slightly goofy, very extroverted. She still lived in our home town. She was married and had four sons, aged 11-18.

She died two days ago.

I don’t know how, though a mutual friend tells me Amy had a severe drinking problem and type 1 diabetes. I learned of the news through an announcement on our class reunion Facebook page. I knew she had four boys and immediately, my heart broke for them and for her husband. My expression of shock and condolence was one of 40+, from classmates, many of whom did not come to the reunion and whom I had nearly forgotten existed.

I clicked on Amy’s profile, we are Facebook friends, and saw that she had been active within the past few days. Recent photos showed the same girl I picture in my head. And happy children and a typical family life. The stark reality, that she made those most recent posts with no idea that she would be gone from the earth by the end of the week, chilled me.

What struck me the most at our reunion two summers ago was how little everyone had changed. With the exception of a few involuntarily bald men, everyone looked exactly as they had in my memory from when we were 18. Back then, we thought we were already world-weary but were still shiny and new with no idea what was in store for us. Back then, we didn’t know that Andy C. would die in less than 5 years from a speedball. Or that Amy would be the mother of four sons, but would not live long enough to see the first one graduate from high school, which will happen in May.

Despite Amy being only a remnant of my high school days and really no part of my life at all, her death is an anvil on my chest. I and most of my classmates are 40 this year; is this just the beginning of a morbid acceleration? We made it nearly 22 years and only lost two of us. Will we start dying off a little faster now, or soon, maybe at the rate of one of us every few years? Who will be next?

I keep thinking of her four boys, her youngest the same age as my oldest, and my heart hurts to think of their next birthdays, the upcoming graduation, next Christmas. Oh, God, Christmas… they just had their last Christmas with her and had no idea. It seems unfathomable, the here-today-gone-tomorrow of it all. It seems so futile, all of it, but all I can do is say a prayer for her family and PayPal a little money to the collection the Class of ’97 is taking up to help with funeral expenses.

I wonder if sudden and unexpected, as shocking as it is, is preferable to a long, drawn out illness? I guess it depends on the perspective. To the deceased, sudden is undoubtedly the better option; you don’t get to say a long goodbye, but it won’t matter to you; you’ll be dead. But to your loved ones, perhaps, it is a conundrum. Nobody wants to watch a person they love suffer, but time provides the luxury of preparation, and at least a semblance of acceptance. Amy’s children woke up that day with a mother, and went to bed without one. It must be unfathomably jarring, like going to sleep in a warm feather bed and waking up on a cold kitchen floor.

When we hear about a sudden passing, we say the same things: hug your family, tell your loved ones what they mean to you; we aren’t promised tomorrow. Of course, this makes sense in the abstract. Death is an alarm clock: love them NOW, before it’s too late. And maybe we do, maybe we go hug our significant other, tell our children we love them, vow to be more appreciative of the people in our lives. For a little while.

But then the next day, you’re late for work and the kid won’t put his shoes on and so you yell, put your damn shoes on and let’s go, and you only think of the inconvenience and not the possibility that this might be the day your kid gets hit by a car or falls to some other unspeakable tragedy, because of course nobody can live their life that way. The best you can do on a day-to-day basis is remember to tell them you love them when you part ways or before they go to sleep at night. It doesn’t always occur to you to make sure your last interaction with someone is a good one because you never think it might be the last interaction, because you don’t plan ahead for the effect of recency in which the last thing that happens is the thing you will remember the most.

Death is a shadow over us all, but we usually can’t see it. If we could, we might stop living. We might find every mundane day futile in the face of others’–or our own–impending, infinite absence. But now and then you get a reminder, such as when the peppy blonde majorette you were friends with in high school unexpectedly dies, and even though you haven’t missed her in 20 years, suddenly you do.

***In the few hours since I submitted this post for publication, I received word that another of my classmates has died. His name was Josh and he and I weren’t well acquainted, but in a class of less than 200 we weren’t strangers. He was well-liked, and a good friend of Amy’s. This doesn’t feel real. 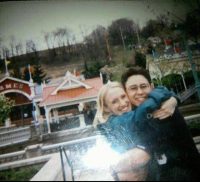