[ThTh1] I’m not sure what to make of the recent claims that scientists have used CRISPR technology to edit the genes of actual human embryos. I’m not sure if the claim can be trusted, first of all. And I’m really not sure about the moral dimension. My gut reaction is to agree that it’s way too early to be using this technology on actual human beings. But science is not known for its willingness to turn back.

[ThTh2] Voyager 2 has now become the second manmade object to leave the Solar System. It astonishes me that these two satellites are still functioning after all these years and still sending back data.

[ThTh3] Speaking of space missions, two exciting ones reached new milestones. OSIRIS-REx rendezvoused with an asteroid and will soon be heading back to return samples to us. Hopefully, the landing goes a bit better than Genesis’ did. And the Insight Mission survived the seven minutes of terror to land on Mars, where it will dig down into the surface to measure Mars’ internal temperature.

[ThTh5] And just in case that wasn’t exciting enough, Insight has a microphone on it and you can now hear the wind on an alien planet. 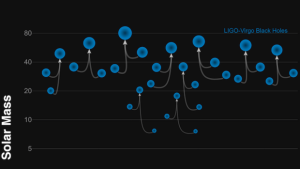 Depiction of the black-hole mergers detected by LIGO.

[ThTh6] Six stellar collisions weren’t enough for you, huh? How about ten, ten colliding black holes! Hahahaha. In all seriousness, this is amazing stuff. The LIGO team went back through their data and pulled out the signals of four black hole collisions we missed last time. This suggests that the next run will be even more amazing.

[ThTh7] One of the most common questions I get asked when teaching Astronomy is if I think there is life outside the Earth. My response is that given the extreme environments in which we have found life on Earth, it would absurd to think life — at least in microscopic form — is not ubiquitous. And a couple of weeks ago, we learned that we may be only literally scratching the surface of how much life there is on Earth. Fun addendum: I once polled my students on their belief in alien life before and then after my lecture on the subject. Before the lecture, they were divided among believing in intelligent life (i.e., aliens) and no life. After, there was a consensus of at least microscopic life.

[ThTh8] Package theft is a growing problem, one of the few dark spots in otherwise improving crime stats. One former NASA engineer decided to have some revenge. If find the technical aspects of this even more interesting than the social ones.