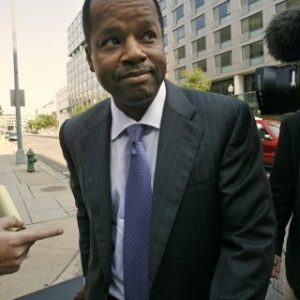 [L1]: We hear a lot about lawsuit abuse and frivolous cases, in which some litigant appears to attempt to make a quick buck through use of the court system against a hapless defendant. While many a lawyer will tell you the stereotype is exaggerated, these cases exist. One such travesty was initiated in 2006 by, of all people, an administrative law judge, in Pearson v. Chung, our case of the week.

Our plaintiff was Roy Pearson, who suffered the tragic tort of (he alleges) a pair of pants lost by a dry cleaner. The business, run by the Chungs, contends they gave Pearson’s pants back, but he insisted they were not his. Pearson sued for the loss of the pants, and also alleged unfair trade practices; specifically, Pearson argued, the “satisfaction guaranteed” sign in the window of the business was an unconditional warranty, one which the Chungs must have had no intention of honoring since they refused to “satisfy” him regarding his supposedly lost pants. If that wasn’t enough of a reach, Pearson asked for damages for seven different violations of the Consumer Protections Procedures act for every day of the several years the business had been opened. His first demand was $1,500; settlement negotiations culminated in an offer of $12,000 from the Chungs, which Pearson rejected. He ultimately asked for $54 Million. At a bench trial, the trial court judge found for the Chungs on all counts. Pearson appealed, but the DC Court of Appeals affirmed the trial court, finding Pearson’s claims “not supported by law or reason”. Just this year, Pearson faced discipline from the DC Board on Professional Responsibility for his actions.

The Board recommended Pearson’s law license be suspended for 90 days. The Chungs went out of business.

[L2]: Millions were riveted a few years ago by the documentary series “Making a Murderer” involving the murder of Theresa Halbach and subsequent conviction of Steven Avery and his 16 year old nephew, Brandon Dassey. The series was chock-full of awful characters-including most of the lawyers involved. What struck me in the series was the abominable representation provided by Dassey’s lawyer, Len Kachinsky, including allowing his client to be interviewed without counsel present, and steadfastly ignoring Dassey’s claims of innocence. Since then, he became a municipal judge, a position from which he was suspended following stalking charges by a court clerk. He was acquitted last week, but I think we can all still agree, he’s a creep.

[L3]: The Ninth Circuit is taking up the question of whether defendant children in immigration courts have a right to counsel. Per the government, because it is a civil rather than criminal proceeding, they do not, not even a baby in a basket.

[L4]: The Chinese tech company Huawei developed a phone smart enough to drive a Porsche, but we won’t be getting it here in the US, due to the FCC’s national security concerns.

[L5]: Third Circuit judge Thomas Hardiman made the news last summer as a name on Trump’s shortlist for SCOTUS nomination. He was back in the headlines last week with his proposal to eliminate discovery in federal civil cases worth less than $500K, an idea some believe detrimental to the average litigant.

[L6]: Uber is being sued again, this time for anti-competitive behavior. They’re accused by rival Sidecar of engaging in “widespread sabotage”, including submitting phony ride requests to tie up drivers, and unfair pricing.

[L8]: Any lawyer who often practices in front of a particular judge will pick up cues, certain phrases that signal to an attorney where the judge’s mind may be going on an argument. Our supremes are no different.

[L9]: Don’t do drugs and then chase zombies around the WalMart parking lot in an endloader, or you may get 15 years in prison like our dumb criminal of the week.

[L10]: The jury is still out on what may make the cut as the craziest lawsuits of 2018, but here are the winners, as it were, for last year: