The History of Crisco, or What I Learned at Berkeley

In my forties, I spent three years getting graduate degrees from Berkeley (2002-04) and Stanford (08-09). My Stanford experience is well-documented, thanks to the fight I had just to keep them from expelling me. It also transformed my life, turning me into a teacher. But my Cal experience made far less of an impression. Ironically, getting a technology degree at Berkeley was the first step towards my becoming a math teacher–I needed to pay the rent and took a job in test prep. That job and the career that sprung from it is my great debt to the school. Despite taking any number of interesting classes that I found quite fascinating, the most lasting instruction I gained from Berkeley informed me I was done with technology. 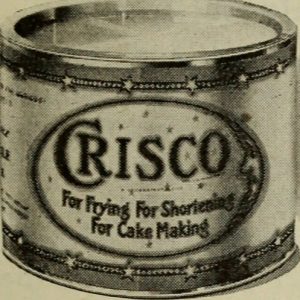 When I like a course, I work hard. And I took course with Larry Downes that I liked very much and was assigned a group project. ( It is a testament to how much I enjoyed this course that I didn’t complain about group work.) Each group was tasked with investigating a large corporation, analyzing its history and future, particularly in regards to the  “innovator’s dilemma” (a big thing in the early oughts), as well as examining its approach to supply chain management (ditto) and its development of information solutions to assist in this.

My group (3 MBAs and me) was assigned Procter & Gamble and fortunately, none of the business boys wanted history. I spent hours in Cal’s amazing libraries dusting off decades-old first editions–in fact, the only library time I spent in three years of grad school was for this analysis.  I found a marvelous, if slightly hagiographic, biography of the country’s early years written in the 1950s, as well as some earlier work from the 1920s, that gave me terrific insight not only into the creation of an American manufacturing giant, but also into an earlier time, when risk was normal.

Procter and Gamble did a tremendous job keeping ahead of the curve for over a century before the information age shifted the balance of power away from food manufacturers, giving the retailers the upper hand that they’ve not yet ceded. Time and again, P&G avoided the innovator’s dilemma, by being willing to risk its incumbent status by bringing out new products, even if they hurt the market share of their core competencies. For example, in 1945, despite its market strength in Dreft, Ivory Flakes, and Oxydol, P&G bet the farm on the best “synthetic laundry detergent” of all time with Tide, which is still the market leader.

But even before that, P&G showed a willingness to think ahead.

From its beginning in 1837, the partnership formed by William Procter & James Gamble became a a major candle producer, having reached a million dollars in sales a few years before the Civil War. Soap was a distinctly secondary line, about a quarter of its business.  Cincinnati, home of P&G, was a major center for hog butchering (originally known as Porkopolis and no, I’m not making this up), so there was always a ready supply of fat, the common ingredient in candles and soap. During the Civil War, already scarce fat supplies dwindled, and P&G were innovators of new methods for making both soap and candles that required less animal fat, which led to even greater market dominance.

However, by the 1880s, the Procters, who ran the business side of the company, realized that the electric lightbulb, invented by their former employee, Thomas Edison, posed an extinction-level threat to their primary product. But the Procters didn’t make panicky attempts to corner the candle market or buy out Thomas Edison. Instead, they decided to bet big on soap.  It was time to sell soap as an individual consumer product, to compete with the expensive European soaps that came handwrapped in pretty paper, rather than sold in big barrels and cut off in chunks, as American soap was purchased.

Riches awaited the company that could invent an affordable soap that smelled and looked attractive. Could P&G come up with an inexpensive oil that would produce a high-quality soap? James Norris Gamble,  son of the founder, the primary innovator of P&G’s manufacturing,  developed a combination of palm and coconut oils as having the necessary sweet-smelling quality without the expense. Then, through a fortunate mistake that involved introducing air into the manufacturing process, they came up with a beautiful, light soap that actually floated. Housewives were instantly impressed–the floating soap was easier to find in dirty dishwater.

A great product was one thing. But the Procter side of the business also had a son, Harley Procter, known today as one of the early pioneers in American advertising. Procter convinced the business to spend $11,000 on advertising the product on a national level. He was an early proponent of consumer packaging, developing a  consistent look and feel for Ivory soap, and came up with the slogan “so pure it floats” and “99 and 44/100 Percent Pure.” And so the candle company eventually closed the line completely and became a hugely successful soap manufacturer.

From its earliest days, Procter & Gamble invested heavily in product and consumer research, leading to decades of dominance in the field. But perhaps because of its early reliance on the supply chain, executives were also always on the lookout for ways to ensure a secure supply chain.

Consider Procter & Gamble’s initial product launches: Ivory (1882), Crisco (1911), Camay (1926), Oxydol (purchased in 1927), Dreft (1933). One of these things is not like the others.
Why did the company famous for innovating an inexpensive, attractive handsoap, a company that actually began creating entertainment products purely as an opportunity to sell ads for laundry detergent (hence “soap opera”)  go into the food business to develop a shortening substitute for lard? And it developed Crisco second, mind you. Procter & Gamble didn’t have another non-soap product until the 50s, with Crest, followed by Pampers in 1961. Most of its other food products were purchased.

So why Crisco? Why did a soap company transform the cooking industry with a vegetable-based fat? Because P&G wanted a steady supply of fat.

To assure a consistent material supply for the soap business, P&G purchased the Buckeye Cotton Oil Company and began to look into hydrogenation, which would harden the oil into a more stable form. They commissioned Edwin Kayser, who had patented the process and…..at some point, someone realized that partial hydrogenation of cottenseed oil made it look a lot like lard and went “Hmmm.” The change from total to partial hydrogenation kicked off a huge lawsuit that bored me to tears when I tried to figure it out so I won’t inflict the details on you.

It’s not relevant, anyway. For one thing, the transfat fuss has returned Crisco to a fully-hydrogenated state. What mattered to me, to my group, to our project, was that Crisco came about not because Procter & Gamble wanted to make a “better” shortening, but because it was a smart company trying to lock down its supply chain. It was also a company that understood the meaning of serendipity, and was a dab hand at advertising.

These days, the only time this history is mentioned is in castigating the evil Procter & Gamble for forcing, yea, I said forcing! innocent housewives to abandon healthy saturated fats. Those doing the castigating are, in fact, the same people who demand McDonald’s abandon beef fat for their french fries, but the times, they change.

Business history is fascinating. We should teach it more in school. Without a test. Just for fun. Studying business is a wonderful means of making our country’s history real.

Meanwhile, next time you dip into a big blue can of Crisco, remember it came about because the Procters wanted an easy way to store soap fat.

Michele Kerr lives in California, for her sins.