I made a series of resolutions this year. I’ve achieved several of them. I resolved to made a change to my career such that my work would support my life, not the other way around. Did that in March. I resolved to move away from the scene of a part of my life that had dead-ended. Did that in September.

Another goal was to run my fitbit step counter up to four million steps. Four million steps a year works out to just under 11,000 steps a day, on average, and for a man of my height 11,000 steps is about five miles. The app that goes with the fitbit will give me an annual total at the end of the year, but I wanted to keep pace myself as I went to know how I was doing all along. That helped motivate me during some lazy periods. I set the app to buzz at 10,959 steps every day, and the device vibrated for a few seconds on my wrist to let me know when I’d passed that mark for the day. And I logged every day’s step count to work towards the four million step goal.

Why walking as opposed to, say, running? A couple of reasons. First, I’m more than a bit heavier than I ought to be (part of the reason to do this) and pushing fifty years of age, and have not ever before in my life maintained a consistent exercise regimen for more than a couple of months at a time. So I didn’t want to do something very strenuous or challenging to a body that hadn’t really ever been pushed like that before. Second, when I started it I had an elder dog as a pet and companion, and she could not really run anymore. And third, I had fallen into enjoying listening to podcasts while doing this, and found that working my body harder than walking, as with jogging or practicing a racquet sport against a wall, was too distracting to keep my comprehension level high. 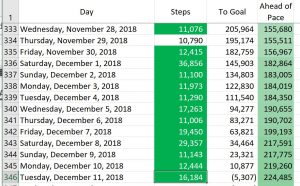 “Conditional formatting” is the spreadsheet motivational tool here: log more than 10,959 steps in a day, the day’s entry turns green.

I quite likely passed an actual mark of four million steps a few days before writing this, because there were occasions over the year when I forgot to wear the fitbit and decided not be persnickety about it. I just went about my business. So it came to pass that the actual 4,000,000th step was taken on the stairs of a Fred Meyer 1 in Portland just a bit past 6:30. I had gone there to buy a Santa hat, and upon getting home I see that it absorbed some rain despite my best efforts, and now is usable only as a chew toy for my lady friend’s dog. Drat — three dollars wasted!

There it is, that’s the glamorous thing I was doing when I fulfilled my New Year’s Resolution.

To get there, I tracked all sorts of activity. I wore the fitbit when I did household chores: vacuuming my former house in California once earned me nearly 2,000 steps. It tracked me moving my household (in whole or in part) three times. It tracked me walking around courthouses and offices as part of my law practice. Dog walking. Golf. Urban and rural exploration — in places in California, Connecticut, Nevada, Wisconsin, and most importantly Oregon. And all of the monocultural airports in between.

Very few of the steps, probably less than a hundred thousand, were accumulated on treadmills. Get outside! I told myself. Even if it’s super-windy, hot, and dusty in the California high desert, or chilly and rainy in the Pacific Northwest. I picked up a preference for avoiding the moving slidewalks in airports and other such areas; similarly I now eschew escalators and elevators when practical.

I’ve gone through about six pairs of inexpensive sunglasses. I wore out a set of generic athletic shoes from Costco and was fortunate enough to befriend a woman who gifted me with a pair of high-quality, water-resistant, light and very comfortable walking shoes after moving to Portland, where I frequently must contend with rain, puddles, and mud even when walking about the city.

Maybe my decision early in the early in the year to pursue this goal was a reason I picked Portland as my destination for a new chapter in life — this is, famously, one of the most walkable cities in the United States. A lot of thought has been put in to carving greenways, roads open to local residential traffic but otherwise difficult and discouraged for through traffic; the major thoroughfares have nice sidewalks and plentiful pedestrian-friendly businesses. And many, many parks used frequently by people of all kinds from the city — including a mountainous forest more than a mile square in area, and another sylvan reserve on a volcanic cinder cone, which is within walking distance of my home. It’s a cornucopia for an urban hiker here.

This is the part of the essay where I’m supposed to tell you what I learned on my journey. I’m not sure there’s a big insight to be offered. I’ve been able to see a lot of different kinds of homes and businesses in a lot of different places out on my explorations, and the importance of walkability to an urban environment probably cannot be overstated. The walkable city is one which is also has attributes measured along nearly any other imaginable attribute of a city that makes it a desirable place to be: beauty and citizens’ pride of ownership, accessibility of commerce and municipal services, flow of traffic, crime, citizen involvement in civic life.

Good shoes are important. So are good socks. So are healthy, strong toenails. When one becomes dehydrated, a healthy drink of water is amazingly energizing.

Walking these distances takes more time out of the day than running them would. Even on short days, it’s two hours out of the twenty-four available to make the step count happen. A week ago, I had a 36,000 step day, which was about sixteen miles, and I spent a majority of my time that day on foot, walking distances that most Portlanders would have at least biked. The lesson here is the time commitment, which has not always been easy to stick to on a day to day basis.

Sore legs and feet, especially after very long walks about town, have become my frequent companions. Not exactly welcome, but there is a degree of pride and satisfaction that comes with the aches of a 10+ mile weekend walk.

The imperative to accumulate steps has forced me to be outside and explore a lot. I’ve seen a whole lot more of my new city than a lot of folks might have imagined in three months of living here, because I’ve walked all over it.

Travel light! I carry a thin runner’s wallet on my wrist most days, rather than a billfold with plastic credit card holders, so I only have a driver’s license and a credit card on me. No cash, no discount cards for retailers. The phone can go on an armband. A headset that connects to the phone wirelessly. Tighter pants and undies most days. Layers of warmer and water-resistant clothing for the wet Portland winter. The ethic of traveling light forces me to consider what I’m going to accomplish on my walk for that day and to bring only what I need to do it. Everything else stays at home.

I’ve recently added a new, somewhat dorky looking accessory to my walking kit: a headlamp. It gets dark early here this far north and some of the places I walk are not well-lit. And it rains a lot here, which isn’t great for visibility – or being seen by people riding bikes, running quickly, or driving cars and trucks. So yeah, I might look like a dork with an LED headlamp strapped to my forehead but I can see where I’m going at night, damn it, and one of the other benefits of turning nearly 50 is I do not have to give much of a damn what randos on the street think of my appearance unless I want to flirt with them.

Finally, I can accurately report that even this relatively non-strenuous exercise provides a flow of endorphins, which make your brain happy. I’ve had some relatively depressing stuff go down in my life, and the exercise and the associated brain chemistry alteration have been good counters to them. So too is the confidence that comes from having a goal at an appropriate level of challenge, and then attaining it.

Next year, I may get a bicycle and have to figure out how to translate bicycle miles into steps, 2 but I bet there’s a fitbit algorithm that’ll do that.

Because I’m going to up my game. My goal for 2019 is five million steps.