As if right on cue, the media began the 2020 presidential primary chatter before the final votes were even counted in November’s midterm election – and indeed, they’re still counting. With virtually every registered Democrat in the country considering a 2020 presidential bid, most of the chatter has revolved around the party out of power. Plenty of likely Democratic players are already making big moves – rendering the so-called “invisible primary” perfectly visible. But Democrats aren’t hogging all of the attention. More than a few have considered the possibility that Trump, a historically unpopular president, could face a challenge within his party. An ex-state party chairwoman for the New Hampshire GOP recently went so far as to say it was “inevitable” that Trump will be primaried. But what does history tell us about these odds? The verdict is pretty resounding: Trump is unlikely to face a “serious” primary challenge and is even less likely to lose against a challenger if he does.

Of the eleven presidents to face re-election in the modern polling era, only four experienced serious primary challenges – George H. W. Bush in 1992, Jimmy Carter in 1980, Gerald Ford in 1976, and Lyndon Johnson in 1968. None of them were successful (LBJ never officially announced a re-election campaign, and famously stated “I shall not seek, and I will not accept, the nomination of my party for another term as your president” following the first primary contest). Compounding the problem for any would-be GOP challengers to Trump is his standing with the Republican rank-and-file. As of this writing, he boasts an 89% approval rating among members of his own party, according to the long-standing presidential approval tracker, Gallup. The consistency of his high level of support over the last two years is remarkable, never exceeding his current 89% rating, never falling below 79%, and averaging 85%. The four incumbents who faced serious primary challenges for re-election all saw lower approval ratings among members of their party at similar points in their presidencies. Only one president in the last 70+ years saw an approval rating higher than Trump’s among his own party at a similar point in his presidency – George W. Bush, just over a year after the 9/11 attacks. 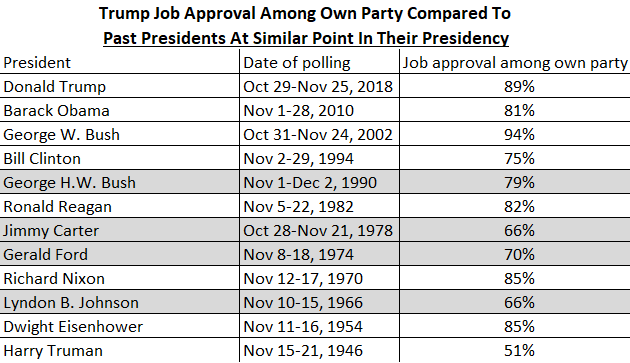 In 1980, Sen. Ted Kennedy came even closer than Buchanan to toppling an incumbent president in the primary. During the month of the 1978 midterms, Gallup found Carter’s average approval rating among Democrats at 66%. Mired by inflation and an energy crisis, his rating had dropped to 40% just before Kennedy’s official November 7, 1979 entry in the race. Carter ultimately defeated Kennedy 51-38%, winning twenty-six contests to Kennedy’s twelve. He averaged a 50% job approval rating among members of his own party from the time of the New Hampshire primary to the end of the Democratic National Convention in August 1980, on par with his 51% share of the primary popular vote.

In 1976, then ex-Gov. Ronald Reagan came even closer than Buchanan or Kennedy to upsetting a sitting president of his own party. With the start of the primary season over a year away, newly-seated President Gerald Ford’s job approval rating among Republicans averaged 70% in November 1974. It had dropped to 60% when Reagan entered the presidential race on Nov. 20, 1975. By the time of the New Hampshire primary three months later, his rating among Republicans was at 69%, which was also his average rating from the time of the New Hampshire primary through the Republican National Convention (though this may not be entirely accurate, as Gallup conducted no polling on Ford’s approval rating following the final primary contest in June 1976 to the end of his presidency). In the end, Ford captured 53.3% of the primary vote, to Reagan’s 45.9%. Ford won seventeen contests, to Reagan’s eleven.

I’ll also mention LBJ, because he did face a serious primary challenge before ultimately opting not to run for re-election. In a November Gallup survey following the 1966 midterm, President Johnson had a 66% approval rating among Democrats. It dropped to 62% when his first challenger – Eugene McCarthy – announced his intent to run on Nov. 30, 1967. By the time of his narrow 49-42% victory over McCarthy in the New Hampshire primary on March 12, 1968, and Bobby Kennedy’s entry into the race on March 16, Johnson’s approval among Democrats had dropped to 52%. On March 31, he announced in a televised address that he would not be a candidate for president again.

In the end, Donald Trump may very well face a primary challenge in his quest for re-election. And there’s no shortage of Republicans interested in the uphill battle. But history suggests that Trump’s current level of support from the rank-and-file would make it nearly impossible for Jeff Flake, John Kasich, or Larry Hogan to gain any traction. At this point in the 2020 cycle, Trump has the approval of 9 in 10 members of his own party. No president to face a serious primary challenge in the modern polling era saw such lofty numbers at a similar point in their re-election bid. The closest comparison would be George H.W. Bush, who was at 79% approval among Republicans in November of his second year in office. But even his “serious” challenger only managed to attract 23% of the vote, and won zero contests. If Republican approval of President Trump does not drop, and drop significantly, he’s a shoo-in for re-nomination. But that won’t stop the media from angling for a competitive GOP primary, even though there likely won’t be one.