“Cross-section of America” is a phrase that gets overused quite a bit in politics. It is the unicorn pollsters are always chasing, and it can be interpreted many different ways.

In the lines snaking their way from a cold Washington DC night through the Capitol and around a rotunda occupied by the 41st president lying in state, it was made manifest. A living, breathing example of E Pluribus Unum, queued up in neat rows waiting to pass by the honored George HW Bush. 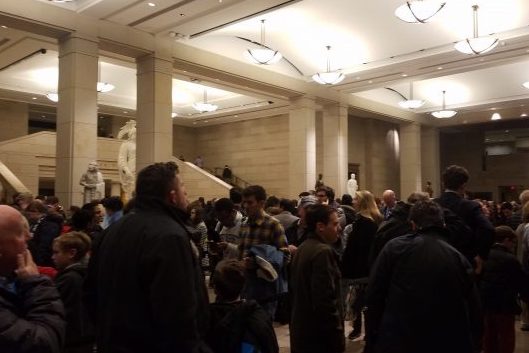 It really was something to behold. There was more diversity than any initiative or program could ever hope to achieve. People who were strangers spent hours talking and getting to know each other. Americans lined up to pay respect, or at least experience the moment of an event that doesnt happen that often. We have only had 45 presidentes to date, ten fewer than the roster of an NFL team on Sundays, the small number of leaders a reminder of how relatively young our nation is in the grand scheme of things. Thirty-three times a citizen recieved the honor of this ritual. Lincoln was the second to lie in state, the first of four assassinated presidents to be honored in this way. Three times the honored had no name, as the remains of unknown fallen from different conflicts were honored before being interred in Arlington from WW1, WW2, Korea, and Vietnam.

But it was the living who stood out on this occasion. Citizens talking about things like government, history, responsibility, but not much talk of politics. Travelers from other countries also came to pay respect. The visitors’ ages ranged from young children scrawling their names in the condolence books to men who, like President Bush, were WW2 vets and the last of a rapidly declining generation. And while there were plenty of pictures and folks checking their phones, it was a lovely reminder that people in real life are not what is portrayed on social media, TV, and elsewhere. The vast majority knew this was a moment in time big enough that it should be a shared experience. Or perhaps that was rather the point for some, that in a modern age of unrelenting noise this most old fashioned of rituals cuts through it all. The symbolism holds even more meaning to those who thought it important enough to stand for hours, travel from afar, bring or meet loved ones. Many, like I who made the trip with two of my kids, shared the moment with their children, who will not really understand except in hindsight. But even the very young felt the moment; watching the guard mount change, seeing the TV cameras, watching the WW2 vet helped to his feet to salute, and generally going from the boredom of waiting to the overwhelming awe of what they were seeing.

It was a fitting tribute to the man under the flag-draped casket, which was resting on black-veiled wooden catafalque first used for the remains of Lincoln, then many others since. A man who had spent more than 7 decades serving his country in various roles. A man mostly remembered for his bearing, the way he dealt with people, and the way he went about his business with dignity, class, and manners. At least for this moment in time, the people of our great nation who gathered at the Capitol on a cold December evening followed his example and rose to the occasion. Respect and civility in practice by a people is a stunning thing to witness when it is lived out, not just used as buzzwords or pleas of deflection during political arguments.

May we do it more often, not just when the honoring of a great man requires it.