Over at the old Right-Thinking blog, I would take advantage of the Thanksgiving Holiday to give out my awards for Turkeys of the Year and Golden Drumsticks. The latter are for those who exemplify the best traits in our public sphere. The former are for those who exemplify silliness and stupidity. I rarely give them out to someone who is evil; they are reserved for those who regularly make me shake my head and wonder what they’re thinking. It’s a sort of “thank you” for making snarky tweeting easier.

It was one of my favorite traditions. So I’m more than happy to be able to continue it here at OT.

Turkeys of the Year

We’ll start with the Turkeys of the Year. For reference, the past winners are:

This year was tough. I knew, all along, that the President would do well. But as the year went on he developed some stiff competition. Ultimately, I can’t give him the prize every year, tempting as that may be. So, without further ado, the winners of the 2018 Turkey of the Year are:

Two months ago, Avenatti was flying high, portraying himself as the one man who could fight Trump and win. Since then, it’s all gone to hell. He blundered his most prominent client — Stormy Daniels — into a garbage defamation suit for which she will now have to pay massive legal fees. He went public with a poorly-sourced and ultimately unbelievable gang rape story that was a big reason Brett Kavanaugh survived his confirmation hearings and possibly a reason the election wasn’t as bad for Republicans as it could have been. And literally five minutes before I was going to submit this post for editing, he was arrested for felony domestic violence. Even before all that, his Presidential aspirations were a potential nightmare for the Democrats; the last thing this country needs is another self-aggrandizing ignorant publicity hound in the White House. I have to think he’s close to finished now. Rarely have we seen a more rapid or deserved fall from grace.

I’m currently reading Bad Blood, the story of Elizabeth Holmes and Theranos. Elizabeth Holmes is who Jacob Wohl mistakenly thinks he is. He’s become internet infamous for bizarre claims of Los Angeles area hipster coffee shops where the clientele secretly love Trump. He’s become famous for bizarre stories about him pretending to be an accomplished hedge fund manager at age 18. And he finally blew up into the public sphere with an accusation of rape against Robert Mueller that was so incompetent and so poorly executed, I’m still not convinced it wasn’t a giant troll. 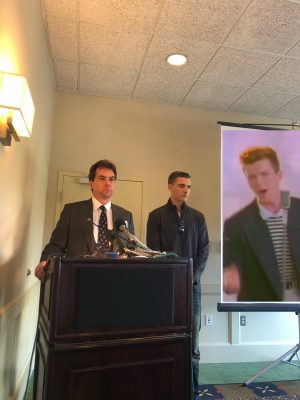 Jacob Wohl’s press conference accusing Robert Mueller of rape. Image may not quite be the original.

I’ll be fair. Most Trump supporters aren’t particularly enamored of him. And the Outrage! brigade that responds to any slight against him is small. But, boy they are fun. Smashing their own products, burning their own shoes (sometimes while wearing them), and looking around for a fainting couch anytime someone disses the President.

First, they tried to kill Ronan Farrow’s reporting on sexual abuse. Then they buried a report that would have cast a bad light on Kavanaugh’s third accuser. Not a good year for them, to be honest.

Here’s a summary of the past recipients of the Golden Drumsticks (links above). Some of these I’ve eventually come to regret. Praising anyone in politics is bound to backfire on you eventually. But I put them out in the interest of honestly owning up to my past blogging.

2013: Francis I; Edward Snowden; Rand Paul; The American Military; The Institute for Justice

For this year … well, I guess I’m already on the Trumpists’ naughty list, so let’s go with:

Mueller has been a very quiet force in the center of the tempest. He’s avoided sensation. He’s only indicted those he knows he can get. He’s handed off investigations to other authorities when appropriate. He’s avoided leaks, which is remarkable. And now it’s looking like he will wrap up the investigation within a few months. I stick to my prediction that, like Bill Clinton before him, the scandals surrounding Trump will destroy many people around him but leave him untouched. In the end, I think even Trump critics will come around and admit that Mueller’s done a fair job under extremely difficult circumstances.

By far, the most consistent conservative in Congress, one of the few who will openly oppose Trump and his party. Why do I like him so much? It can be summarized in a tweet.

Trump has abdicated his role as leader of the free world. Thankfully, others are stepping in to fill the gap. They’re not perfect, but they’re all we’ve got.

Dan Crenshaw decided to bypass the outrage brigade and show a spirit of humor. Martha McSally resisted pressure to indulge conspiracy theories and conceded a hotly contested election with grace. Ben Sasse has been putting forth a solid conservative message. John McCain resisted Trump until the end. There’s been some criticism of Republicans because many of them vote with Trump on various things. This seems misguided. The things they are voting with him on are standard issue Republican policy positions. On many of his fronts — the Wall, for example — his proposals have died in Congress before even getting to a vote. I don’t expect Republicans to suddenly vote liberal. I do wish more of them would stand up against the madness that has engulfed much of the party and take back Congress’s power on war, on trade and on budgeting.

I said on Twitter that I thought they would never get all those young men out alive. I have rarely been happier to be wrong.

Be sure to put your nominees in the comments. OT has a much broader readership than RT so I’m very curious to see the diversity of answers.