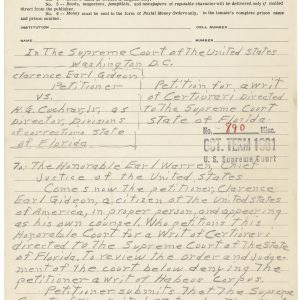 [L1]: In 1961 Clarence Gideon, a career petty criminal from Florida with an 8th grade education, found himself charged with felony burglary, among other things. Having no money, he asked judge to appoint a lawyer to his case. Under Florida law, said the judge, Gideon was not entitled to counsel unless he was charged with a capital offense-that is, one punishable by life in prison, or death. Mr. Gideon faced only five years. He proceeded to represent himself through trial and, as one might expect, found himself convicted. Lawyerless, he handwrote a petition to the Florida Supreme Court. When that was summarily rejected, he wrote another one and sent it to the Supreme Court of the United States.

Not only did they accept Gideon’s petition in our case of the week, Gideon v. Wainwright, but the Court also ruled in his favor, thereby securing the Sixth Amendment right to counsel for all persons charged with a crime in a state court.

[L2]: Speaking of due process, is it legal for police to us their search dogs on your vehicle without your consent?  Here’s a roundup of what you need to know (and in sum: yes.)

[L3]: Lots of talk about sore losers after last week’s midterm elections, but no one holds a candle to this judge in Texas,who took ungracious losing to a whole new level of petty.

[L4]: In last week’s crazy news cycle, you may have missed the release of the first SCOTUS decision of its current term, an 8-0 decision applying age discrimination law to government entities of all sizes, no matter how small.

[L5]: Did you know that he United States government may not hold a copyright, per the Copyright Act? According to the 11th Circuit Court of Appeals, neither may a state.

[L6]: There has been a lot of debate over the legality of the appointment of Matthew Whitaker to temporarily replace Jeff Sessions as attorney general. Here’s the case for illegitimacy.

[L7]: And here’s the counterpoint.

[L8]: Speaking of Trump decrees, he canceled Jim Acosta last week- or, at least Acosta’s press pass. But does a 1977 decision out of the DC Circuit offer the CNN reporter some recourse?

[L9]: Committing crimes while hungry can lead one to make bad decisions, as our dumb criminal of the week learned.

[L10]: Maybe said dumb criminal could argue it was not him, but his evil twin. Does that ever happen?

[L11]: In light of the story circulating recently about the short law school love affair of Supreme Court Justices Sandra Day O’Connor and William Rhenquist, I leave you with the following: