The Privilege of Slumming It

{This was originally published at Hit Coffee, in May of 2016}

In recent years, the term “neckbeard” has become perjorative short-hand for “undesirable dude.” Not just undesirable in the sexual sense, but in the social as well. When Ricochet’s Jon Gabriel tweeted about seeing a bunch of neckbeards at a comic book shop, it was pretty much assumed what he meant. Male losers. It relates, directly or indirectly, to ungroomed hair growth in the neck area. We can infer from that that this is not someone who takes care of their appearance.

Why the neckbeard? Mostly the process of elimination. Things like traditional stubble, messy hair, and so on have become intentional adornments. Other things, such as obesity or general ugliness, it’s considered untoward to comment on. A neckbeard, though? That’s a deliberate choice. Losing weight is hard, and most of us know at least someone that has struggled with it. But shaving your neck isn’t. If you can’t even do that, then you obviously don’t care about your appearance and contempt cast your way is therefore to some degree earned. So we can, with that one combined word, describe someone’s attitude towards their own appearance. Very handy

I’ve hated neckbeards since before hating neckbeards was cool. I have a very fertile neck, as far as that goes, and I therefore shave it at every opportunity. Regular stubble can be an affectation, but neck hair almost never looks good (and especially not on someone like me that has a thick neck even when I’m thin). 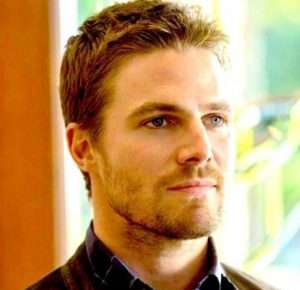 That’s Stephen Amell, who plays Oliver Queen, the title character on the TV show Arrow. He doesn’t shave his neck, but people don’t seem to especially notice. I’ve had the conversation on more than one occasion. A friend commented how much she likes Oliver Queen’s beard. I ask whether she means the Van Dyke from the comic or the neckbeard from the TV show. Confusion follows because what neckbeard?

Now, granted, Amell doesn’t have a full neckbeard. But like me he has a fertile neck, and in any given scene the hair on his neck will match the hair on his face, and neither are usually clean. He does the stubble thing, which is hip. He also does the neckbeard thing, which really only works because he looks like Stephen Amell. I suspect that, on the face of a perhaps chubby comic book nerd, thats what Gabriel was looking at in the comic book shop. In short, if you look like that fellow on the left, you can’t pull it off. If you look like the fellow to the right, you can… 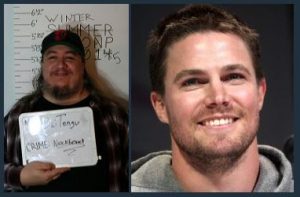 One of the reasons that Taidengu is more likely to be criticized than Amell is because it’s more noticeable on account of their respective frames. The smaller your neck, the less noticeable it genuinely is. Which is the case for a lot of things. Though Elizabeth Picciuto informs me that this is no longer as much the case as it once was, thanks to capitalism, it seems that fashion trends for women are geared very heavily towards those that have the best figures. Which is to say trends seem to go specifically towards those outfits that compliment the fewest number of frames. While that’s commercial and this is physical, it is nonetheless a noticeable truth that if you look good in a traditional way you can get away with a lot more than if you’re on the fringe.

This came to mind a day later when Nob Akimoto commented that being able to dress down is a form of privilege. It was, I believe, in reference to Bernie Sanders and the White House Correspondence Dinner. I believe that’s actually quite right, and for a lot of the same reasons that Stephen Amell doesn’t need to worry about shaving the way us mere mortals do.

Amell can afford people criticizing his neck – if they even notice – because he is otherwise so good-looking. Someone like Bernie Sanders can get away with acting low-class because he is a very important person. It’s just an affectation! It’s just Bernie being a man of the people! Which is all fine and good, but these are only assumptions we make because we know that he could wear a tux and doesn’t. Someone else who doesn’t wear a tux, we might make other, less populist, assumptions about.

Sheila Tone made a similar observation about being able to dress her oldest child (then her only child) in ragmuffin attire. She said it years ago, on a site that has since been taken down, but it’s stuck with me all of this time. I can dress Lain however I want. I can get clothes from Goodwill. If she is so inclined, I can let her go out in her underwear. No one will make assumptions about us. No one will call the CPS worried that we can’t afford decent clothes. People might look at her and determine that we are bad parents, I guess, but not in any threatening way. We can chalk it up to eccentricity. 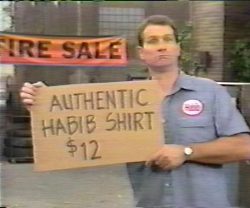 When I was young and single, I was a sucker for work shirts. You know, Habib shirts, like from on Married With Children. I never found a true Habib shirt, sadly, but I had several with a lot of names, some Anglo and some not. You could get three for five dollars. For a college kid on a limited budget, that was really cool. They were certainly cooler than “1992 Charity Fun Run” shirts for the same price. I can lean on my comparatively limited funds and being truly frugal at the time. I would feel extremely self-conscious wearing them now, though, and not without reason.

There are no broad answers, of course. It goes to the question of the value of social norms, for which everyone has a different answer both broadly and in individual instances as well. When Bernie refuses to wear the tux, is he running interference for those that can’t or is he inadvertently mocking them for a judgment from which he is comparatively immune? Is Stephen Amell being “normal” with his lazy shaving habits, or is he doing with his face what an attractive woman might do with a particular bathing suit: Only I can pull this off. What is the intention, and what is the reception? To what extent do they even think about it? To what extent is it their responsibility? And to what extent is all of this just urinating into the tornado of the inequities of life and society?