Are There Earnest Arguments Against Birthright Citizenship?

I.
There was recently a hubbub about Megyn Kelly saying wearing blackface isn’t necessarily bad—that it can be done admiringly.

Among the problems with her idea was that every single time white people have put on blackface, it has been to demean and belittle black people. Kelly was just the latest person from that long and storied tradition.

Nevertheless, many people extended every possible excuse to Kelly. Ben Shapiro was among those insisting “No, Megyn Kelly Isn’t A Racist”

Kelly’s comments were ignorant, by her own admission. But that doesn’t mean they were racist. If you knew nothing about the despicable history of blackface, and you donned black makeup to dress up as Michelle Obama, that might make you ignorant, but it certainly wouldn’t make you racist or anything close to it. In fact, we could fairly say that you were making a statement against racism by dressing up as a black person you admire.

Kelly’s comments were borne out of ignorance, so they can’t be held against her. Shapiro is not content to leave it at that though. Even if Kelly wasn’t ignorant, that’s still only “perhaps” racist:

The question is whether you knew about the history of blackface and chose to ignore it anyway. If so, that’s at least racially insensitive, and perhaps racist. If not, ignorance does not equate to racism.

Of course it is possible that she truly actually didn’t know. That she’s been paid million dollars to opine and educate millions of Americans and doesn’t know something that is in middle school textbooks. It’s further possible that all of the many people who might have been in a position to show her the Bing results for “blackface” were ignorant too because they were all blinded by their love of Diana Ross.

II.
There’s a political party in Greece called “Golden Dawn.” Its symbol has an interesting shape that looks vaguely like a swastika. But swastikas are illegal in Greece and it’s right there in their symbol, so it must not be a swastika. Also, when asked, party officials insist it is not really a swastika before admitting that they are nationalist and racist.

But maybe it’s not a swastika. Maybe it’s just a symbol they thought looked cool. Yeah, that’s probably it.

IV.
The entirety of US national history has featured strong disagreement about who should enjoy the full rights and privileges of full citizens. I am going to present my own cartoonized version of history here, but do your own research if you want better.

In general, there have been a lot of arguments as to whether things like owning property, literacy, being able to pay a poll tax, having a clear record, and being able to clear other arbitrary barriers ought to count towards a person’s claim of full citizenship. By and large, these were all proxies for more fundamental claims:

If you doubt this, take a look at Louisiana’s Jim Crow “literacy” test. It’s nonsensical and meant to give full control of who can vote to whoever is grading the test.

In the face of this history, people nevertheless put forth the idea that there should be tests to determine who should vote. They will generally claim that they are wholly unconcerned with trying to prevent marginalized groups from voting even though this has been the goal of ever other person who has proposed such tests.

Nevertheless, if we are willing to extend Shapiroian levels of charity, perhaps some of them are ignorant of the history they are invoking and really just think it’s a good idea that has nothing to do with race. It’s entirely possible in a country with 308 million people that there exists one such person.

Historically, opponents of birthright citizenship have been uniformly racist. The entirety of their concept was that “real” Americans are white people whose citizenship is not questioned. Black, brown, and yellow people are not.

The arguments for this were often intellectualized to appear race-neutral, but they never were, and they often didn’t bother. Here is what happened when a Sikh man tried to become a naturalized US citizen.

Thind did not bother trying to argue that non-white people should get to become citizens too. Instead, he, a Sikh man “of full Indian blood” argued he was white:

…he attempted to have “high-caste” classified as “free white persons” within the meaning of the naturalization act based on the fact that both northern Indians and most Europeans are Indo-European peoples.

VI.
I encourage you to check out Wikipedia’s article on Mexican Repatriation, which I have no memory of learning about in school. It involved the “repatriation” of somewhere between 400,000 to 2,000,000 people to Mexico. Most of them were born in the United States and should have been United States citizens. In fact, many of them were promised US citizenship under the Treaty of Guadalupe Hidalgo that ended the Mexican-American War, which I do remember learning about in school as I was taught America always won all of its wars. These people who were granted US citizenship were even counted as “white” in the 1930 US census.

That all changed rapidly, and this should sound familiar to those paying attention to current-day rhetoric:

a variety of “small farmers, progressives, labor unions, eugenicists, and racists” had called for restrictions on Mexican immigration. Their arguments focused primarily on competition for jobs, and the cost of public assistance for indigents.

And the whole exercise, of course, was about race:

Mexicans were targeted in part because of “the proximity of the Mexican border, the physical distinctiveness of mestizos, and easily identifiable barrios.”

It seems significant to me that the United States kicked out perhaps a million US citizens because of their race less than a hundred years ago under both a Republican and a Democratic administration.

VII.
So, how do we answer Chad’s question here?

The argument for birthright citizenship is that we’re not a nation premised on ethnicity or race but that everyone born here is a citizen all the same. What’s the counter argument being ignored by righteous indignation?

I submit, humbly, that there are some earnest people who oppose pure birthright citizenship.

There is an industry that helps women late in their pregnancies fly to the United States, give birth in a US hospital, and then fly back to their home countries. Their children are full US citizens, but they don’t experience the country in any meaningful way.

I’ve spoken with a good number of first-generation immigrants who have lived in the country for decades and have their own children in the United States now. They are not fans of birthright citizenship being awarded to such children. When I pressed a bit further, they said something like the women should have to spend some longer amount of time in the United States. 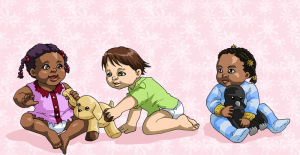 At any rate, they find it weird that US citizenship is something that can essentially be bought for the children of wealthy tourists who may have no other connection to the country up until they are due to give birth. Their argument is that is weird, and I believe them to be earnest.

Of course, I can’t really know whether they are hiding latent racism or not. I am pretty sure they have no idea of the history of birthright citizenship and the fact that people not too unlike them were essentially stripped of their citizenship and tossed out of the country when it became politically popular to do so.

Nevertheless, I do believe them.