The Peopling of North America

The scientific search for the oldest traces of human settlement in North America continues. From BGR:

For many years the consensus among archaeologists was that humans began settling in North America around 13,000 years ago. This timeline was based on artifacts found that dated back between 12,700 and 13,000 years, including weapons. Now, a new discovery in Texas could throw that theory right out the door.

Researchers from Texas A&M, Baylor University, and the University of Texas have uncovered what they believe to be spear points that were used by human hunters as far back as 15,500 years ago. The discovery pre-dates the accepted timeline for the settlement of North America by a significant margin, and scientists may be forced to rethink when and where the first groups of humans pushed into what is now the United States.

The most common contemporary interpretation of the archaeological record is that around 20,000 years ago, humans began to migrate into the landmass now known as Beringia. Around 15,700 years ago, glacial retreat allowed them to explore beyond Beringia, into present-day Canada and then they began the long process of exploring and populating the North and South American continents. Finding stone tools in Texas that date to around the time they were thought to have just left Berinigia,  could change this interpretation. One theory it may support is the idea that there were earlier migrations via sea, something that has been speculated about for decades.

The sea migration theory holds that ancient peoples, locked in Beringia by glaciers on the eastern terminus of the land mass, may have began to explore down the North American coast via water. Eventually they would have found open land in warmer climates, thus populating southern areas earlier than previously thought. Research on this theory is further complicated by the fact that most of the probable landing sites are now under water, as sea levels continued to rise for thousands of years with glacial retreat.

It is important to keep in mind that Beringia was not the narrow ‘land bridge’ many textbooks describe it as. It was roughly as large as the Canadian provinces of British Columbia and Alberta combined. Ancient peoples occupied Berinigia for nearly 5,000 years before they could migrate further via land. That allowed a long time for ancient explorers to find alternate routes.

An ancillary detail is that we also know that at some point these people split into two separate groups. From Gizmodo:

The evidence…suggests the continent’s first settlers arrived in a single migratory wave around 20,900 years ago. But this population then split into two groups—one group that would go on to become the ancestors of all Native North Americans, and another that would venture no further than Alaska—a previously unknown population of ancient North Americans now dubbed the “Ancient Beringians.”

The discovery suggests two possible scenarios for the peopling of the Americas. Either two distinct groups of people crossed over Beringia prior to 15,700 years ago, or one group of people crossed over the land bridge and then split in Beringia into two groups, namely the Ancient Beringians and the Native Americans (where the latter moved south of the ice sheets 15,700 years ago).

Ultimately this research confirms that all native peoples of North and South America are descended from a single genetic group that originated in East Asia. It also tells us that there is much more to understand about actual migration patterns beyond Beringia as we attempt to better understand the settlement of two continents.

* Photo added below of Wisconsin Glaciation for reference. Source. 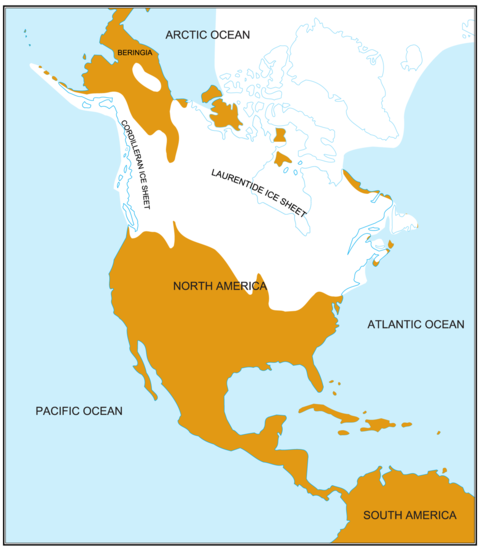