“The soul becomes dyed with the colour of its thoughts.”
– Marcus Aurelius, Meditations 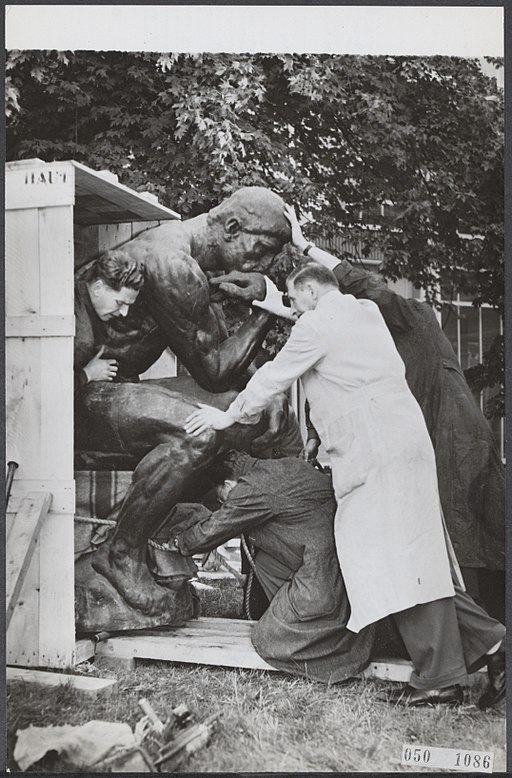 Rodin’s “The Thinker” being shipped

[Tp1] Morals Are Objective: Fundamental moral truths are independent of the culture we are in by Maarten van Doorn “Morality is supposed to be inescapable in some special way, but, for all that has been said, this may turn out to be merely the reflection of feelings about morality. These are big concerns, and I don’t know how to solve them. But is seems to me to be a misleading sleight of hand to solve them by bestowing a magical power on social rules to provide moral reasons.”

[Tp2] Does Philosophy have a function in society? by Bert Olivier “It hardly requires a genius to realise that today humanity still faces a situation of ‘universal social misery’, despite proponents of the currently hegemonic economic system claiming otherwise — a brief reflection on the provenance of the saying, the 1% versus the 99%, should clarify what is at stake here. This obviously raises the question — at least to socially concerned world citizens – what ought to be, and can be, done to alleviate the present situation. More pertinently for someone like myself, a practitioner of philosophy, is there anything one might expect philosophy to be able to contribute to resolving the persisting conditions of suffering globally?”

[Tp3] Why we all need Stoicism in our lives by Shubham Vyas “Much of philosophy is, therefore, abstract and complicated. It is so divorced from daily life that only a handful of graduate students care about it anymore. It deals with solving pseudo-intellectual problems, but hey, isn’t that what most of academic life is like these days. Philosophy wasn’t always this way, it used to be about helping people live their daily lives and find the appropriate path to follow. That is where Stoicism comes in. Stoic Ethics can be thought of as a means of protecting ourselves from any external adversity that can possibly be thrown our way.”

[Tp4] Philosophy plays a pivotal role in the conversation of artificial intelligence by Mark Sharma “Philosophy is not only useful in our AI conversations due to the ethical dilemmas that surround AI, but also useful in logically proving which concepts can be translated into computer science and mathematical algorithms. The new ways that this technology is being implemented in society is a hot topic of conversation at ASU, where some professors claim that AI is reshaping the world. In addition, students are inadvertently having philosophical conversations alongside scientific ones by discussing how the ethical and legal infrastructures regarding AI are lagging behind.”

[Tp5] Nietzsche’s three steps to a meaningful life: The story of the camel, the lion, and the child by Steven Gambardella “It was in 1882, at that low point in his life?—?increasingly physically and mentally ill and living in virtual isolation in Rapallo, Italy, having been abandoned by Lou Salomé, the woman whom he loved so much, Nietzsche started to write one of the most extraordinary books of the philosophical canon: Thus Spoke Zarathustra. The book is a philosophical novel that chronicles the descent of a wise hermit?—?Zarathustra?—?from his habitation in a mountain to a fictitious land where he dispenses wisdom in a series of themed episodes.”

[Tp6] Modern Man And The Great Spiritual War: Carl Jung, the modern plague and the search for soul by Harry J. Stead “This is what Carl Jung, in the middle of the Twentieth century, called the “spiritual problem”. The problem of the spirit, Jung believed, coincided with the ruin of the individual. It is an issue that persists today, perhaps with more ferocity than in the past. Because with each new decade, the unresolved problems of the past only steepen. We have still to answer the question of how the needs of the individual fit with the needs of the modern industrial machine.”

[Tp7] The Two Types of Knowledge (or How to Be Smart) by Zat Rana “Whether you are learning to play a sport or simply trying to create a more accurate mental model of reality in your mind, you are working with a variety of experiences, and within those experiences, you have to choose and reinforce the ones that are the most useful to you. In this way, everything that you do is essentially an experiment that gets refined and corrected with experience and practice.”

[Tp8] Video: settling the debate over Greek vs German philosophers…

[Tp9] Philosophy of the World by The Shaggs

You can never please anybody in this world