Are We the Baddies?

It’s possible to spend a lot of mental horsepower trying to decide what constitutes a hateful ideology. I don’t want to dismiss such efforts as futile, but they are certainly open to manipulation. Everyone seems equally capable of convincing themselves they are on the side of angels.

Here, I’d like to suggest we leave the analysis of rhetoric to others and instead adopt a naïve approach and blur all the inner details of what people say.

In other words, even if you preach nothing but unicorn sparkles, if your adherents do nothing but rob liquor shops, your ideology is bad. Similarly, even if you regularly call for violence, as long as adherents don’t act on it, your ideology is good. What makes the approach naïve is that we don’t look under the hood to evaluate what people are saying. We are only looking at the ultimate result.

To make this more concrete, the fact that the person who shot Steve Scalise was a Bernie Sanders supporter is absolutely a black mark against Sanders. This is offset by the fact that many others have not done the same, and others have done good things. What we can’t say, in the naïve approach’s view, is that the act of shooting a Congressman has absolutely no bearing on how we evaluate the value of the ideology held by the person who did it.

How does Trumpism fair? Unfortunately, though my formula is simple, it still requires a good bit of data. There are millions of Trumpists. Surely some of them are indeed very fine people doing great things. Recently, one Trumpist sent threatening devices to several Democrats and other people that Trump has targeted rhetorically. 1

I think I’m willing to say that the perpetrator’s actions don’t reflect all that much on Trump supporters as a whole (though they do a little). That isn’t the only way we can perform the calculation though. If we look at truly rabid supporters who are the sort who would cover their van in Trump stickers, that is a much smaller set of people. And one of them is either an aspiring murderer or at least wanted to be thought of as one. That’s not great even if it’s not quite as bad as shooting at a field full of Congressmen. 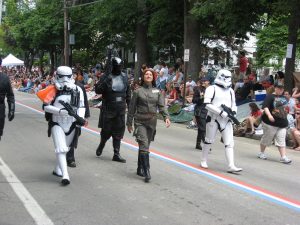 As I’ve said, the takeaways on recent events are unclear. Nevertheless, I would suggest that we react to murderers within our mist with a little more humility rather than automatic dismissal or even well-reasoned dismissal. If you notice the people who share your beliefs keep doing bad things, consider the possibility that it is you who is on the dark side.