What is Going on with Baseball?

What is going on with baseball? The game has changed from what it was when we were kids, and many think not for the better. Balls in play are down, strikeouts are up, and every hitter seems to be swinging for the fences all the time. The sexy big-ticket stat is that last season, for the first time ever, there were more strikeouts than there were hits.

What is going on with baseball? If you follow the baseball press you have probably read about hitters taking uppercut swings to get launch angles producing towering fly balls, and exotic bullpen strategies using more and more pitchers in ever-shortening outings. All this stuff is true and relevant so far as it goes, but takes a narrow view of what is happening. What is going on with baseball is in fact nothing new at all. 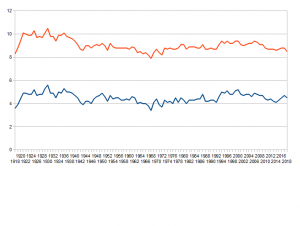 Take a look at Figure 1, showing the average number of hits (red) and runs (blue) per nine innings, from 1918 to 2018. Why 1918? That is the end of the dead ball era: the year that Babe Ruth got serious about hitting home runs, with everyone else soon to sit up and take notice. This graph is pretty boring. It shows us that for the past century teams have scored between four and five runs a game. Sometimes it goes up a bit, and there is that dip in the late 1960s, but the overall trend is pretty much a horizontal straight line. The rate of hits is even more uninteresting, correlating even more strongly than I would have guessed with runs. It is no accident that this graph is so boring. The offensive production rate is kept steady by intent. The Powers That Be responded to that late-60s dip by lowering the pitcher’s mound and the AL instituting the designated hitter. 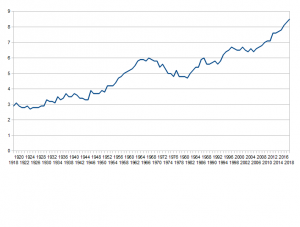 Now look at Figure 2, showing strikeouts per nine innings. This is much more interesting. It turns out that strikeouts being up isn’t a new phenomenon at all. They have been rising for the past century, except for the dip in 1970s What happened then? The aforementioned lowering of the mound and addition of the DH. Then about 1980 the rise resumed at the same rate as previously, and was higher than ever. This has been going on ever since, with no sign of slowing. We now see about three times as many strikeouts as a century ago.

Finally we get to Figure 3, showing home runs per nine innings. The data is a lot messier, but follows the same general upward trend as strikeouts, with about six times more home runs than a century ago. 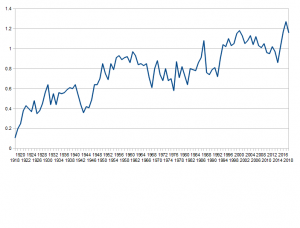 So my point about launch angles and bullpen strategies is that they explain, to the extent that they explain at all, the right side of those graphs. Something bigger is going on here than just the past few years.

The next thing that has been going on is that players individually and teams collectively are better than ever. This is heresy for the shout-at-clouds faction of baseball fans, but these people deserve nothing more than a good eye-roll. (It is worth keeping in mind that the earliest known case of a geezer complaining that kids today aren’t playing the game the right way comes from 1858. However they played the game when you were a kid, some old coot was complaining about it.)

Consider personal fitness. A top athlete nowadays has an expertly designed nutritional program, a team of trainers to help him with conditioning, and strong economic incentives to stick to the program. Babe Ruth had kids he would tip to bring him hot dogs. Or consider video tape, a great unheralded revolution in sports. In the 1970s video technology reached the point where a coach could put a camera on a tripod so a pitcher could see his delivery, or a batter his swing, and work on adjustments. This was itself a revolution. Nowadays a batter can duck into the video room between innings to see his previous at bat. How about data analysis in general? In the late 1980s, Orel Hershiser recorded each batter he faced on a laptop in the dugout. This was regarded either as forward thinking or eccentric, depending on who you asked. Nowadays pitchers don’t do this because clubs have dedicated personnel providing far more detailed analysis than Hershiser could do on his own. And the shift? Love it or hate it, it is backed up by data. Even apart from the shift, Wee Willie Keeler’s dictum to “hit ‘em where they ain’t” is superceded by spray charts and fielder placement optimized for each batter they face.

Today’s players and teams are better than yesterday’s players and teams, who were better than those before them, and so on going back at least a century (and really, a century and a half). Now combine that with a century of pitchers trying to strikeout batters, and of batters trying to hit home runs. We now have the explanation for Figures 2 and 3. Batters are trying to hit home runs. Pitchers are trying to throw strikeouts. Both sides are constantly getting better at achieving these goals.

The problem is that optimized strategy doesn’t necessarily make for attractive play, and rules which work just fine at lower levels of play can produce gridlock when the best players are using the best strategies. Does anyone really think that a soccer game ending in a 0 – 0 tie is exciting? Maybe the most dedicated afficionados admire the brilliant defensive play, or perhaps they are just posing. And even if they are sincere, how general is this admiration, and for how many games before it gets old?

The same is happening, I think, with baseball. Yes, chicks dig the long ball. This is a timeless truth. But there is a reason they only televise a home run derby once a year. And while it was exciting to see the line of “K” placards in Dwight Gooden’s day, enough is enough.

What to do about it? Is there any remedy? Actually, I think it wouldn’t even be all that hard, given the will. Players and teams respond to incentives. Don’t like the result? Change the incentives. But be sure to work both sides. Mess with pitching while not touching hitting, or the other way around, and you end up throwing the runs per game numbers out of whack.

Consider those exotic bullpen strategies we are seeing nowadays, or even the less exotic but still aggressive bullpen strategies of ten years ago. These are the late stages of a long term trend for pitchers throwing fewer innings, and therefore being able to go all out all the time. Dial back the bullpen usage and pitchers will have to pace themselves a bit. One way to do this would be to limit pitching changes during the inning. Change pitchers all you want between innings, but you only get one (or two, or zero–I don’t much care) mid-inning change per game. Use it wisely.

Batting incentives are actually dead easy to change, again if baseball has the will. Deaden the ball. There is a mystical air to the ball as an inviolate constant in baseball history. This is utter nonsense, of course. Back in the day, using a livelier or deader ball was an unexceptional topic of conversation. Now any hint of the ball having different physical characteristics has a conspiratorial air to it. So when it was suggested that the up tick in home runs of the past few years (though not this one) was due to the ball, MLB reflexively denied any such thing. It turns out that it was the ball, though not intentionally, and not in its elasticity. Rather, the seams were just a hair lower than before, and this changed its air resistance. Why were the seams lower? Who knows? Maybe a slightly different thread entered the supply chain somewhere. Maybe the people in the factory sewing the seams adopted a slightly different technique. Maybe three people in the factory retired, and their individual sewing techniques had happened to produce higher seams. In any case, there is no need for a conspiracy theory when slight random changes can produce the results.

If we get past the mysticism about the ball, we can intentionally deaden it to some modest, measured degree. This will change the batters’ incentives. A fly ball that today ends up in three rows back would be caught at the back of the warning track. The blast into the upper deck is still a home run, and indeed is probably still a blast into the upper deck. This is good, because as aforementioned, chicks dig the long ball. So, come to it, do the dudes. The deader ball wouldn’t eliminate home runs, much less the really exciting ones, but it would make them a bit rarer. The guy hitting forty to fifty home runs will keep doing what he is doing, but the guy hitting fifteen or twenty will find many of them turning into fly outs. He will eventually come to the conclusion that this is not the best way for him to make a living, and will switch to hitting line drives.

Will MLB make these changes, or other, better ones that I didn’t think of? I think it will have to eventually, but I don’t expect much in the short term. There is a lot of reflexive conservatism and many veto points in implementing changes. This season we saw 8.5 strikeouts per nine innings. It was 8.3 last season, and 8.1 the season before that. If I had to guess, my money would be that it will be 8.7 next year. But this trend cannot go on forever. Something will have to give.