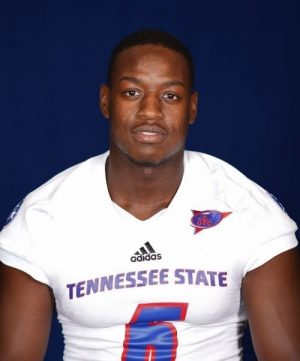 Abercrombie, an Atlanta native, suffered a head injury late in the second quarter and was rushed to Vanderbilt Medical Center, where he underwent emergency surgery.

“The last I heard he was in surgery; we’ve been praying for him,” TSU coach Rod Reed said after the game. “I’m going to leave here and go there to see about him.”

“He … just kind of collapsed”

Abercrombie was listed in critical condition following the surgery, according to a TSU release
Reed was unsure about exactly when Abercrombie was injured. “It was right before the half,” Reed said. “He came to the sideline and just kind of collapsed there.”
Abercrombie was administered oxygen on the sideline before being taken away on a stretcher.

Abercombie is a sophomore transfer from Illinois. He came into the game as TSU’s second-leading tackler (13 tackles) and also had 1.5 sacks this season.

He recorded five tackles and a quarterback hurry before being injured Saturday.