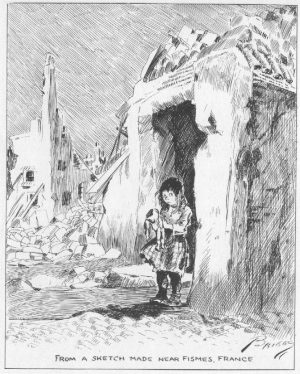 Clare Briggs was a cartoonist in the early 20th Century. He was something of a trailblazer, one of the earliest “celebrity cartoonists,” the first to implement various aspects of comic strips that have since become standard. He was also my great-grandfather.

He was born in Wisconsin in 1875 and raised in Nebraska. At the University of Nebraska, he studied art and stenography (and took math under John J. Pershing). He began his career as a sketch artist for the St Louis Globe-Democrat. At the time, halftone photography wasn’t a thing nationwide, which provided opportunities for artists to simply reproduce photographs. He became a war correspondent for the St Louis Chronicle, covering the Spanish-American War. That war ended and photography printing technology improved; he lost his job and left St Louis for New York, where he drew men’s clothing designs and, after a brief return to Nebraska and marriage, became a courtroom sketch artist, where he was (re-)discovered by the William Randolph Hearst media empire and sent to Chicago.

It was in Chicago that his career took off and he really started to make his mark on the cartooning world. His most important work there was a comic called “A. Piker Clerk”, a comic about a horseracing gambler that had the distinction of being the first comic to feature recurring characters and stories.  According to some sources, it was also the first horizontal-sequenced daily comic strip. Shortly after that strip was released, a cartoonist in San Francisco released a comic strip about a horse racing gambler named “A. Mutt”, which is more commonly known as “Mutt & Jeff”. Due to conflicts with William Randolph Hurst over gambling – the comic revolved around horse-racing – and Briggs’s portrayal of the Russian Tsar, he moved to a competing paper, the Chicago Tribune, where he had more autonomy and his career really took off. 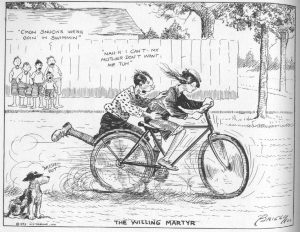 His career success allowed him to relocate back to New York, where he became the cartoonist for the New York Tribune (later New York Herald Tribune), which was at the time was one of the city’s major newspapers. There he became a prolific cartoonist with many of his best known strips. Between his childhood in Nebraska and his life in New York and Chicago, his cartoons had a good cross-section of subject matter from family apartment life to children swimming in the creek. Some are jokes that still resonate today, while others seem a little foreign or aren’t really punch-line jokes but what can only be described as “tickling familiarity” (The equivalent of tweets that start with TFW or “That Feeling When.”) Many of the themes he touched on would be familiar to today. Some would be considered sexist or racist, while others were surprisingly progressive in their own way. 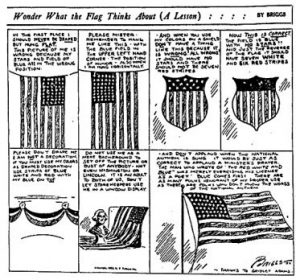 The comic that changed the way the US Flag was handled.

It’s unclear what politics, if any, he held. The New York Tribune was a Republican paper dating all the way back to abolition, but the only presidential race he ever referred to (that I’ve seen) was the one in 1884, when he was nine years old — presumably the first election he remembers. Mostly, he wrote about family, childhood, women and men, the office place, and a lot about golf.

Much of his legacy is bound up in A. Piker Clerk, which is a little ironic given its relatively short run, its unpopularity with Hearst, and that he apparently didn’t enjoy doing it. Mutt & Jeff was an imitation of his work, as was Casper Milquetoast, whose last name was entered into our public lexicon. His works were adapted to film and radio. He was also a pioneer in celebrity endorsements, with a pipe tobacco brand and various other ventures. He was a founding member of the American Association of Cartoonists and Caricaturists. He has even received credit for flag regulations:

As Briggs could always cause his readers to smile so too, on occasion, he could cause them to act in response to his drawings, such as he did yearly by his Fresh Air cartoon. Another example of this was his famous cartoon, “Wonder What the Flag Thinks About,” which appeared in June 1922. This cartoon caused a nationwide controversy on the improper way in which the American flag was used and resulted in the calling of the National Flag Conference in Washington in 1923. Members of 67 of the largest patriotic organizations of the country participated in the conference and formulated a set of regulations for proper civilian use of the flag. Briggs was always credited with the greater part in causing this action.

One of his comics is used for the feature image on “Weekend!” posts. I hope to be featuring more of his work in the coming weeks and months.