If you are reading this post on the main page of Ordinary Times, that means that I am no longer a Californian. That feels a little weird to write, after so many years and so much enthusiasm I’ve had (and still have, there’s so much good stuff there!) for the Golden State. But I want to, and really must, make myself into something different from what I’ve been.

Most of my possessions have been given away or sold. What remains is packed into a moving truck. I’ve sold my car and as of press time I’m in a rented SUV, filled with what I need to exist and work. I’ve signed the deed to the house I’ve lived in for a dozen years. If you’re reading this the weekend of its publication, I’m probably somewhere on or near U.S. 395 or U.S. 97, making my way up from my former life in Southern California’s desert to my new life Portland, Oregon. 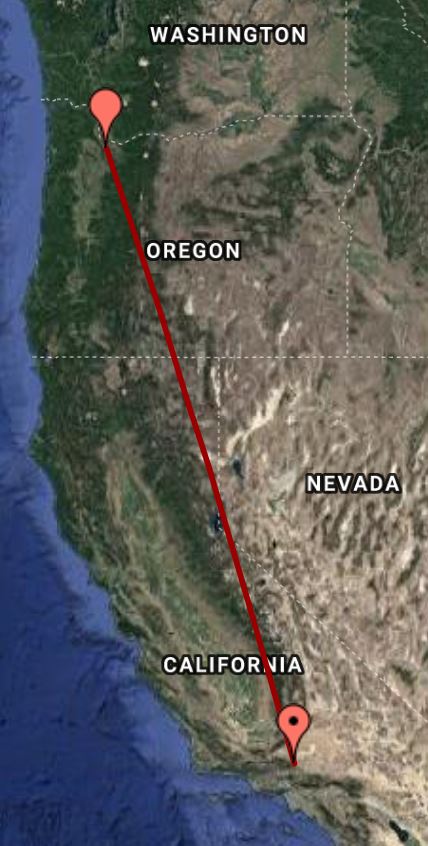 For narrative purposes, though, great circles present a difficulty. If you’re following a great circle, as through the air or over the ocean, your geographic heading is constantly changing because the Earth is curved so your heading’s compass direction changes constantly as you move. If you need a simple method to describe the direction of a journey, the rhumb line provides a good shorthand for your direction because it is the point that intersects all meridians between origin and destination at the same angle. To the right is a Mercator projection of California and Oregon with a rhumb line drawn from my old home to my new home. 1

My actual route is not the shortest highway route possible, which would basically be I-5 all the way from the northern border of Los Angeles County into the southern border of Multnomah County. If you’ve ever driven through California’s Central Valley you may understand my aversion to go this way. Instead, I’ve selected a route that hews fairly close to the illustrated rhumb line, which for about two-thirds of the distance is along the Eastern Sierra route of U.S. 395. It’s much more scenic, for one, and for another the total drive time is going to be only about an hour and a half more (assuming no traffic and you can’t assume that around Sacramento) and I have people and resources available to me along this route.

I also get to explore a bit, and that’s kind of what this is all about anyway. I’ve never been that far north of Reno on the 395, 2 however, and that shall change this weekend. This route also allows me to pay my respects to my mother, who is buried in the evening’s shadow of Mt. Whitney. I do not know when I shall return there again though surely I shall, be back there one day, to bury my father next to her. Hopefully not for many years to come.

The bearing on my journey’s rhumb line is very close to seventeen degrees westerly of true north. The great circle distance I will travel is 784.12 miles. For a variety of reasons having to do with my decision to eschew Interstate Highway 5 and the fact that roads must necessarily bow to topological realities such as mountains and lakes as well as service population centers, I shall drive a little bit more than two hundred ground miles in excess of this amount.

Of some geographic geekery interest is the midpoint of the great-circle route lying less than a mile from a point on the 395 that I shall drive, in a place 14 miles west of the Nevada border that the map calls Herlong Junction, California, just south of Honey Lake. The precise midpoint is an accessible-only-to-hikers spot near the top of a ridge in the Plumas National Forest by a little stream identified as Pinco Creek.

If the locals use these names for these places or not, I’ll probably not learn, to be honest, but knowing this in advance will give me a signal for when I’m beyond the midpoint of my journey.

But even as I write this before the move, I’m well beyond the point of no return. It’s been more than a year and a half since a divorce that broke my heart and changed my life forever. The losses have felt relentless and gut churning: my career ambition, my mother, my marriage, even my dogs. All of these once brought me happiness but are now gone. All things are transitory, the dead do not resurrect, and after a decent and appropriate time to mourn, one must move on with life. 3 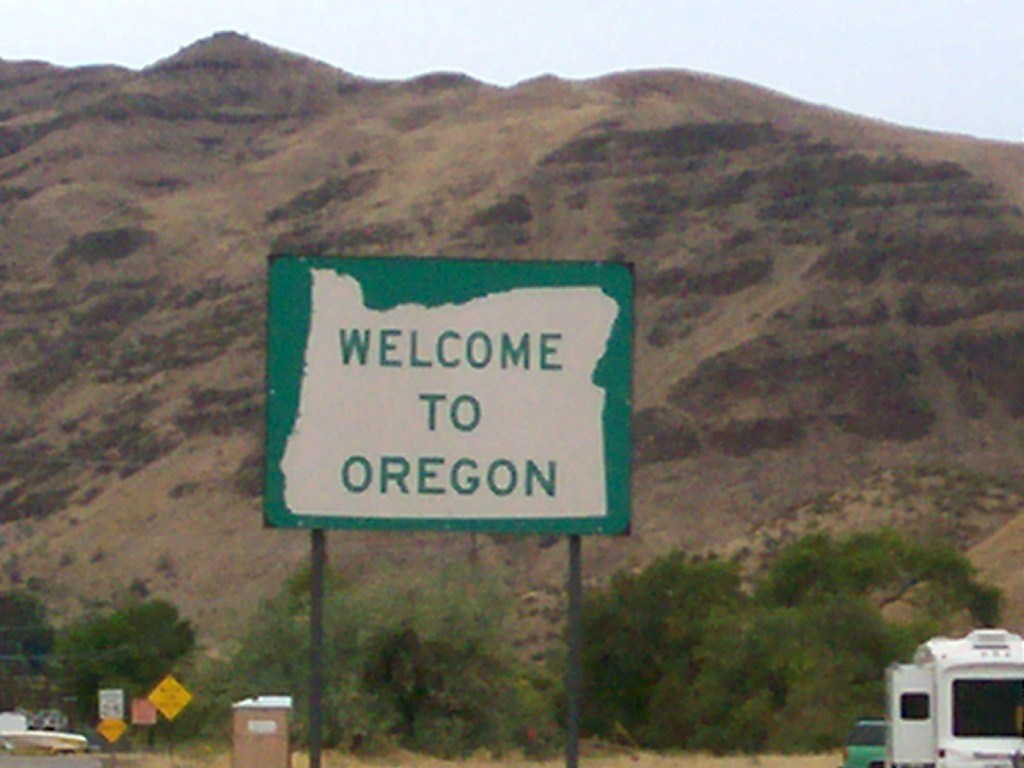 I’ve changed career tracks, lost thirty pounds of excess weight (with more to go!), paid off old debt, re-entered the dating world, overcome at least the bulk of my depression, sold or given away more than half of my possessions, and now sold my house in California to buy a new one near the confluence of the Willamette and the mighty Columbia.

Thanks in no small part to friends I’ve made here on these pages, I’ve had several trips to Portland and enjoyed the friendship and hospitality of good people there, people who have gone out of their way to be good to me. Now, there’s good people everywhere, but the good people of Portland have shown me a place where I can readily access superlative food and drink, patronize the arts, surround myself with a progressive social environment, and enjoy a physically active lifestyle. It is a place where all signs suggest the environment will actively assist my pursuit of eudaimonia.

Internally, I’ve been at Herlong Junction for over half a year now. Separating myself from my roots in California’s high desert near Los Angeles. Halfway between where I came from and where I’m going. Where I’m going is now of much, much more interest to me than where I’ve been.

I’m as full of optimism now as I’ve been at the start of any adventure. Some of my adventures have not worked out so well. Others have been fantastic. This is another journey, a new chapter, one with no guarantees that it will work out well — just as there are no guarantees elsewhere.

There certainly are risks and downsides. My goodness! I hope I can continue to get avocados for a reasonable amount of money. I do love avocados and have become spoilt by their ubiquity in California. They aren’t exactly indigenous to the Pacific Northwest. 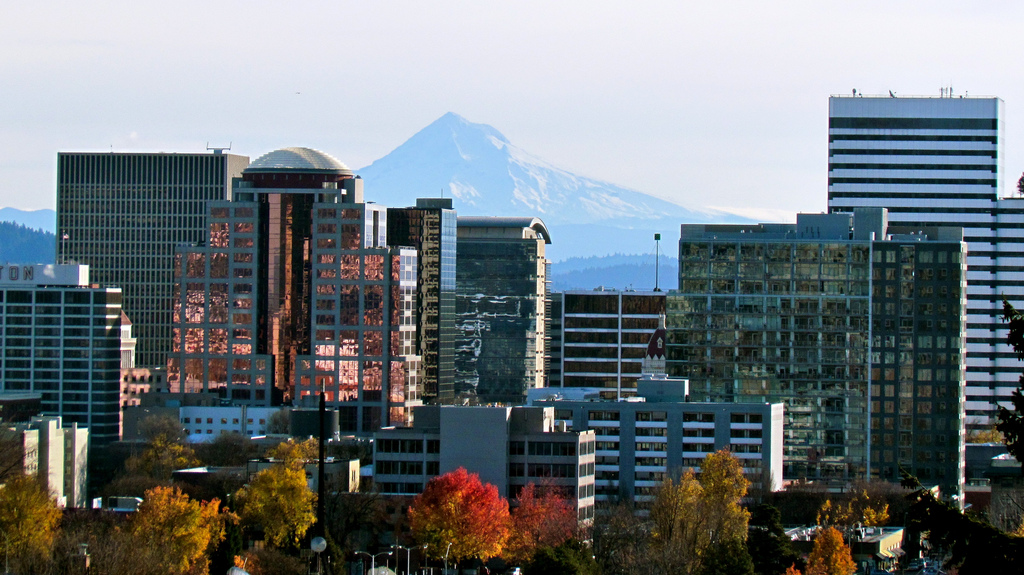 Other than that, I think that this move is going to be a good thing for me. I doubt I shall have to do without many of the things that I love to do. Food and drink? Music, theater, and the arts? Exploring the outdoors? Books and education? All of these things are on offer in the Rose City, in abundance.

And then there’s the thrill of the unknown and the new. What new thing will I discover and enjoy there? In a youthful-thinking, open-minded, dynamic sort of civic environment, there’s bound to be all manner of new things to explore and try. I can try to live a greener life there, I think. To walk and bicycle to more places rather than drive is very much a Portland way. Let’s see how long I can do without a car completely, and utterly blow the minds of all my friends from the L.A. area who use their cars for every trip. 4

There will be problems and challenges in Portland, to be sure. I am mature enough to know that there are no guarantees that I will thrive and be happy as I hope there. I do know, as I’ve written before, that a change will do me good. As much as it pains me to say farewell to the many friends who have been good to me in California, through both good times and bad, it shall be a joy have the many Oregonians friends who have also been good to me as my neighbors.

There’s something 784.12 miles away, seventeen degrees westerly of true north. I don’t know precisely what it is. I’ve confidence that it’s going to be better than what I’m leaving behind.

As you read these words, I’m closing in on it.