Something #Basta This Way Comes

Nature, allegedly, abhors a vaccum. Politics even more so, and when there is an absence of leadership all things tend to spiral in chaos until that leadership vaccum is filled. Though resistance to President Trump is nearly universal on the left, just who exactly is the leader of that movement is very much up for debate. Even with the prospects of a “blue wave” in the upcoming mid-terms, the Democrat Party is still more united in hatred of Trump than joining under any one banner. With a divisive president and both cyclical and historical trends that favor the minority party in non-presidental election years, it might not matter much. But in the looming 2020 battle for the White House, leadership most certainly will matter, and whoever can take the mantle will be the favorite for the nomination to challenge Donald J. Trump.

I think it’s going to be candidate-driven. I think the reason why a lot of these voters that make up (Trump’s) base are not abandoning him is because we don’t have a reasonable alternative. When I say a reasonable alternative, I’m not talking about a platform position or a series of ideas or issues — I’m talking about an individual. I mean, we’re asking them to change horses but we haven’t given them a new horse to change to. Until the Democratic Party does that, I’m not surprised that the base has not eroded.

Meet Michael Avenatti. You probably best know him from the relentless coverage he garners as Stormy Daniels’ lawyer/hype man, but you may not have noticed his current change of course. He’s been to Iowa twice, New Hampshire, Ohio, Florida, Pennsylvania. His appearance was the most newsworthy event at the summer DNC gathering in Chicago. He very publicly intervened pro bono to escort seperated children back to their parents during the child seperation controversy at the border. As the Kavanaugh confirmation hearings kick off, he’s now weighing in on a proposal to change the highest court in the land:

In light of the Garland seat that was stolen, together with the events of today and the hiding of docs, etc., the court must be expanded to 11 seats after 2020. The Dem nominee must commit to this or not receive the nomination IMO. There is far too much at stake. #Basta

Below is an updated summary of where I stand on over 20 key issues. This is not an exhaustive list; more positions and details will follow. I am pleased to report that I still have not had to take a poll or hire a political consultant to tell me what to say or what to believe. pic.twitter.com/51F9zF88OG

And then there is this:

A number of pols/operatives have contacted me recently and asked for advice on my “fighter messaging.” As if anyone can just adopt it and win. My response is the same each time – you are either a fighter or you aren’t. And people will crucify any politician that is disingenuous.

Any candidate that is currently running for higher office with an election in November owes it to voters to be honest about their intentions regarding 2020 NOW. They need to commit now to either run or not run as opposed to hiding it. Otherwise, they are deceiving voters.

If you are noticing a pattern that sounds vaguely familiar, that is by design. In an interview with Paper Magazine, Avenatti offered a bit of insight into his current strategy, and spoke highly of the tactics employed by none other than President Trump, when asked a question of how a candidate in his 70s mastered Twitter and galvanized an audience:

Look, Mr. Trump’s not a young man by any stretch, but you’ve got to hand it to him. He’s done a remarkable job using Twitter as a platform and being able to communicate his message directly to people and bypass the media filter. That’s the other thing — too many people have underestimated this man. He is not to be underestimated. When it comes to policy, when it comes to dealing with North Korea, when it comes to serious problems, I think the guy’s a total buffoon. He’s an embarrassment to the United States. But when it comes to campaigning, his messaging and his ability to excite people, I think he’s brilliant. I think the guy is the best around. He’s a hell of a communicator and we need to recognize that.

His reasoning is sound. The formula for Donald Trump’s success is not a complicated one: Known personality taps into simmering anger, becomes its avatar, and short circuits a moribund system that cannot react to a populist uprising inside of one election cycle. There are many other factors of course, but that is the “how” of the never-ending “how we got Trump” question, and we will leave the “why” for another time. If you are wondering what that has to do with Avenatti and his potential POTUS aspirations, the answer is plenty, according to the man himself, who is openly telling us what model he is following.

He may have a pretty good read on the current political situation, and perhaps a more accurate one than other potential nominees. Right now, forces are already in motion that will determine 2020 to a great extent. People sometimes forget, among the twists and turns of a roller coaster, that everything is happening according to how the rails were laid out ahead of time. The 2020 campaign will definitely be a roller coaster, and though there is much we don’t know, the tracks are being laid out right now that will determine that ride. There is reaction to Trump of course, but other factors will loom large. The pending confirmation of Kavanaugh will be seen as nothing short of a failure of the Democratic establishment to #Resist!, no matter how hopeless such a belief was.

The mid-term elections will have a tremendous amount of influence on the shape of the campaign. The Blue Wave may indeed be coming, but the math of taking the senate is probably too daunting.

So for the sake of argument lets assume the house flips to Democratic control and the Senate remains Republican. The howl for impeachment will be loud, not withstanding the impossibility of getting 66 conviction votes in the Senate, unless an awful lot changes. A year’s worth of doomed-to-fail impeachment theater will be a great variable in American politics going forward.

But the anger and frustration of all these things from our friends on the left is not a variable. It is very real, and is searching for a conduit to produce the results that will satisfy those passionate desires. Which brings us back to Avenatti, and his “fight fire with fire” positioning. While wannabe POTUS contenders on the Senate Judiciary Committee were attempting various strategies to have a viral moment, biding their time to announce their runs for the White House, Avenatti is nearly omnipresent, assailing the president at every opportunity. Sen. Booker’s “as close to a Spartacus moment as I will get” stunt reflected this reaction from Avenatti on his Twittter account; 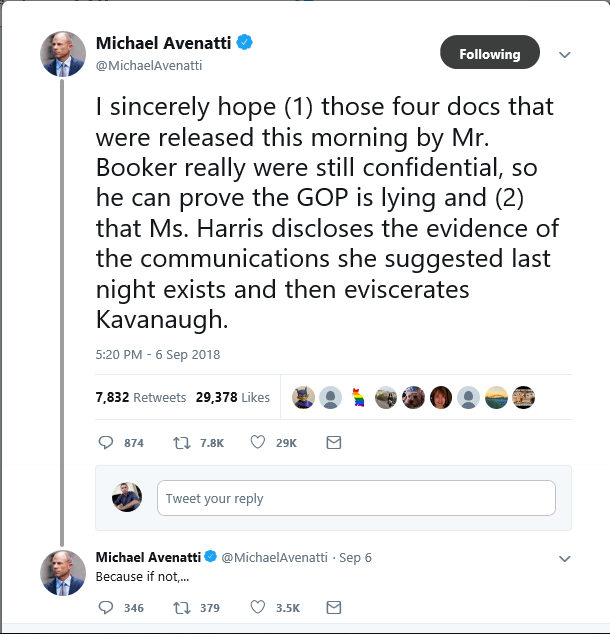 Avenatti also weighed in on Sen. Kamala Harris’ performance, in which she strongly insinuated through her line of questioning that she had knowledge of a conversation between Kavanaugh and the President’s lawyers, which has seemingly proven to be a bluff:

Those are carefully worded tweets, stopping short of being outright criticism while still getting the point across. It is fair to say that as of right now Avenatti is mostly still a media personality and Twitter presence. But that was the criticism of one Donald J. Trump not long ago, and Avenatti’s plan to “fight fire with fire” apparently includes borrowing heavily from the Trump campaign book when it comes to media hits, and the use of Twitter to communicate his message directly to people.

Will it work? Maybe, but I doubt it. The problem with fighting fire with fire is to an outsider, all they see is fire. Presidential elections are won not by the political junkies but by the voters who span the spectrum from casually interested to straight ticket punchers. To the population that only tunes in at the end of a campaign, if at all, there is a very real danger that trying to “out-Trump Trump” devolves into two brands of crazy that just drown each other out. The voters Hillary Clinton missed in falling to Donald Trump might not be enticed back home just for the sake of being against Trump by being louder, feistier, and more aggressive.

The Democratic party is making a grave error in assuming that whoever they choose for the party will automatically be rallied to. The GOP establishment went into 2016 assuming their base’s frustration at 8 years of President Obama would stay within the lines the party was trying to construct for it. We see how that turned out. What to watch for here in the coming weeks is who steps forward to channel all that frustration from the Resist! side of things. The hard left may be enraged but they are also keenly observing the potential contenders for taking on President Trump in 2020. If they see Avenatti busy about the work of the resistance while elected officials only talk about it, with little to show for it, the opening for an outsider might be an Avenatti-sized hole. If he becomes the avatar for resistance rage, and his #basta hashtag turns on the currently hapless DNC screaming “enough!” watch out.

Michael Avenatti has a plan. Democrats that do not want him progressing further better get one, rapidly, if they want to stop him. Otherwise, 2020 might well be the fire vs fire election, and it is the country that will be burned in the process.