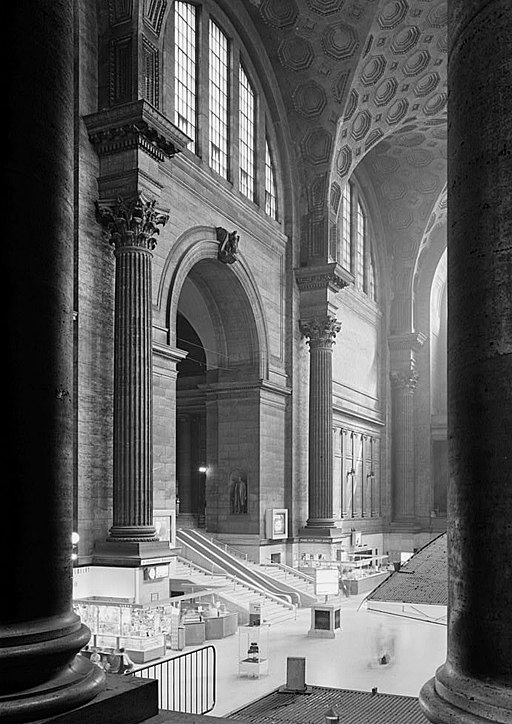 Any city gets what it admires, will pay for, and, ultimately, deserves. Even when we had Penn Station, we couldn’t afford to keep it clean. We want and deserve tin-can architecture in a tinhorn culture. And we will probably be judged not by the monuments we build but by those we have destroyed.
– “Farewell to Penn Station,” New York Times, Oct 30, 1963

[Mu1] To be deaf, blind, and a dancer is one thing, to teach others how to move to the music they hear and you don’t is something.

[Mu2] Good line: “But years of evidence show cutting school music programs to save money is like trying to stop a clock to save time.”

[Ar1] “The biggest art fraud in US history,” worked the way all good scams work; people wanted to believe it was real.

[Ar2] Instead of suffering for your art, how about art as a form of pain management.

[Ar3] “The Public Art of Robert Moses’s New York”, and how a city changed its mind, repeatedly, on sculptures and monuments.

[Ar4] The caged bird still sings, and these prisoners are producing art.

[Hi1] “I have obtained one of the finest and least expected results—Spectra of the stars!—and beautiful spectra with colors and magnificent lines. Just one more step and the chemical composition of the universe will be revealed,” wrote astrophysicist Pierre Jules César Janssen. He had observed helium for the first time.

[Hi2] The forthcoming “first-ever” same-sex marriage for the British Royal Family is hardly the first such relationship, just more open than in the past.

[Hi3] Trivia is always tricky, and TV game shows have a long history of cringe-worthy moments, but this one makes a run at worst flub in gameshow history. Including social media post-flub breakdown by those involved.

[Hi4] The history of Bitcoin.

[Fo1] “Within one single recipe, one piece of paper, there is so much depth and logic.” After 140K students and nearly 60 years of instruction, this culinary institute would know.

[Fo2] The food fight scene from Animal House is iconic, so of course the St. Paul Saints played it on the scoreboard while 8,000 fans re-enacted it for their “Largest food fight” promotion.

[Fo3] The history of non-milk milk, as the debate over whether nut-based liquid can be labeled “milk” on packaging and advertising.

[Fo4] I’ve treated my children to a surprise Happy Meal or two over the years when they were in school as a treat, but some schools are attempting to crack down on that, and parents are not happy.

[At1] Art and Architecture always seem to want to be together, and are beautifully so at the Boston Public Library

[Ar2] I’ve seen this myself. Architecture and history focused social media accounts also can be hiding places for all sorts of lunacy, including alt-right racism.

[Ar3] Architecture folks still weep for the destruction of the original Penn Station, so on the 20th Anniversary of Grand Central’s restoration a review of how it was done, including the Supreme Court case that was involved.

[Ar4] “You are not a profession that has distinguished itself by your social and civic contributions to the cause of civil rights,” Young chastised the audience, which had gathered in Portland, Oregon for the American Institute of Architects’ (AIA) National Convention that year. “You are most distinguished by your thunderous silence and your complete irrelevance.”