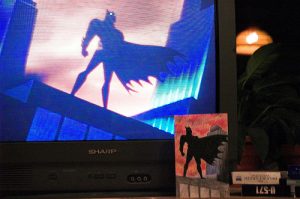 Batman: The Animated Series is, seriously, one of the best superhero treatments out there. Gorgeous character design, gorgeous music, gorgeous city, and arguably the best actors playing the role.

Now, keep in mind, this cartoon came out from 1992-1995. You know what Batmans we had back then? We had the Adam West television show, the Michael Keaton movie, the other Michael Keaton movie, and (at the tail end of that run) the Val Kilmer movie. Two years after the show ended, we had the George Clooney movie.

Seriously, superhero stuff used to be a total wasteland.

But the cartoon (er, pardon me, “animated series”) took the show seriously enough to want to tell straightforward stories. They weren’t really winking at the audience, they weren’t trying to tell the adults in the room how sophisticated they were while, at the same time, feeding pablum to the kids in the audience.

They took some of the old campy bad guys from the 50s and 60s and turned them into really interesting characters. Mr. Freeze, for example, had pretty much been a straightforward “ice-themed villain” that was jockeying for position with The Flash’s Captain Cold and Green Lantern’s Icicle and Firestorm’s Killer Frost and Wonder Woman’s Minister Blizzard. I mean, jeez. How many “guys in a suit with a machine that freezes stuff” do you need?

Well, The Animated Series gave us a version of Mister Freeze where he was a scientist whose wife was cryogenically frozen hours before her death by some horrible disease and Mister Freeze is working tirelessly to come up with a cure. His crimes are in service to what he’s trying to work on and darn the consequences for anything that happens to anybody else as a result of it. This backstory is now canon and this throwaway character is now one of the most interesting bad guys in the DC universe.

Harley Quinn is a character that was created out of whole cloth by the series. There was going to be a scene where Joker jumped out of a cake to surprise Batman and, well, it was the (early) 90’s and some of the executives thought that that was a little weird. So the team created Harley Quinn to be a doctor at Arkham Asylum who was twisted by the Joker and turned to a life of crime with him and she was going to jump out of the cake and the executives were a little more okay with that. But they had Joker jump out of the cake instead. Where was I? Anyway, Harley Quinn provided a great counter-point to Joker, allowed for a surprisingly honest (for a kid’s cartoon, anyway) example of a toxic relationship between her and Joker, and, again, became canon.

The Animated Series had that much depth all over. Kevin Conroy is arguably the best Batman actor (for example, you can tell when he’s Batman or when he’s pretending to be Bruce Wayne). Mark Hamill is brilliant as The Joker. Heck, the entire cast was so good they brought everybody back to voice act their same parts in the video game series because those voices are the voices they knew the audience heard in their heads when they thought of these guys.

Following the paltry pickings given by Hollywood proper, this pretty much meant that, for years, when people asked “what’s the best Batman movie?” my answer was “Batman: Mask of the Phantasm“. It had the best acting, the best bad guys, the best music, the best sets, the best fight scenes, and moments of actual growth on the part of Batman Himself. It didn’t feel like a commercial that was trying to move product. It felt like a *STORY* being told by master storytellers that enjoyed their audience.

Anyway, the whole series is now (finally) coming out on Blu-Ray. And if you look at that pricetag and say “that’s a little steep!”, know that it’s a bargain. The series is Just That Good.