The Church Doors Close Behind Me

My grandmother died just over two weeks ago. She was a big part of my life, especially when I was a child. She was born in 1922 in a village on Italy’s west coast, into a family that would become divided into inductees into Mussolini’s army and two of her brothers who became partisani and met very, very bad ends for doing so. Her real life began just after Christmas in 1943 when that part of the Allied forces that included my grandfather’s artillery division liberated this village. My grandfather was a handsome fellow and my grandmother was a pretty local girl who caught his eye. By 1946 she’d become a war bride and had followed her still-new husband to Milwaukee, Wisconsin, which to her might as well have been a journey to an entirely different planet. The place where she would die, seventy-two years later.

Nearly all my ancestors are gone now. Still living on my mother’s side of my family are my mother’s sister, her husband, and myself. I’m close with my father, but not so close with his surviving brother as I’d like, nor with any of my cousins on his side of the family. This realization makes me feel sorry for myself, I suppose, but it’s the product of choices that we’ve all made to have few children (in the case of my parents) or none (in the case of my aunt and myself). I’ve no idea if these are good choices or bad or neutral. 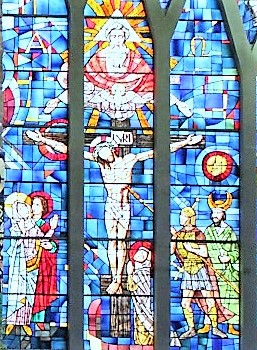 A detail of the stained glass in the church.

What I do know is that I’m the one in the family who is thought best at public speaking (lawyer!) and consequently I was tasked with eulogizing my grandmother. In the same church where my mother and aunt were baptized, the same church in which my parents were married, the same church in which I eulogized my grandfather. The same church where I looked as a teenager upon the looming crucifix with the detailed wood sculpture of a tortured Jesus with a gaping spear wound below his ribcage and the luminous stained glass portrayal of Bible stories like the Temptation of Eve and the Sacrifice of Isaac and the Last Supper, and said to myself, “Not only do I not believe any of this ever happened, it’s downright gruesome and why are we exposing little kids to this and calling it good?”

But there it is, the crucifix and the luminous gory stained glass depicting the ancient stories and a priest who’d never met my grandmother and who could not pronounce her name correctly, mumbling a homily about the Visitation through a thin cloud of incense. My lack of faith was not relevant to the proceedings. My grandmother’s great faith — and my aunt’s in her footsteps — was what steered us back to this building, this institution. I’ve known for a long time that to close the door of her life, I’d have to go through the Roman Catholic Church, and indeed through this particular church on the west side of Milwaukee, Wisconsin.

For the sake of the living, most especially for the sake of my aunt who I will admire to the end of my days for caring for her mother during nearly two decades of physical and mental decline (while also juggling a career and caring for a disabled husband and rebuilding her home after a fire destroyed their first), I paid honor to the strength and guidance the Church provided my grandmother during her life. I said the words of the Mass and ate the cracker which I have never actually believed was the body of the risen savior, I sang the songs and recited the prayers and said the amens. Because funerals are for the living and even though my aunt knows perfectly well I am not a believer, she needed the assurance of the ritual and the cultural continuity.

What’s more, there just weren’t that many other people there to say those words, to sing those songs, to engage in the rituals. We wish long lifetimes to one another, forgetting this comes with a price. A consequence of living as long as my grandmother did is nearly all of her friends have preceded her in death. This particular church is a cavernous space, which can seat at least 750 people at Easter or Christmas. But for my grandmother’s funeral, there might have been 40 people there — including the choir of which my grandmother had been a member for as long as her voice had the strength to sing her Alleluias.

Absent from the funeral was my grandmother’s best friend, the lady who lived across the street. She turned 100 years old earlier this year. Unlike my grandmother, Alzheimer’s did not come to rob her of her memories and faculties. She visited with my grandmother nearly every day to play cards and check in and keep my grandmother’s mind as sharp as she could for as long as she could. I called her out in my eulogy for special thanks for this, but as I say, she wasn’t there at all. My aunt and I went to visit with her a few hours after we interred my grandmother’s ashes next to those of the handsome G.I. who’d gone ahead of her. Our neighbor was visibly tired and candid about her own end being imminent–she was comfortable enough with the notion of her own end, but the thought of her friend being gone was too much for her and that was why she hadn’t gone to the funeral Mass.

Part of me wishes the words and the rituals and the prayers meant something to me. Would that they had comforted and assured me, as they did my aunt and her husband, that there was a plan and despite my grief, all would work out for the best. It’s simply not within me to embrace that notion, and not for lack of listening and trying and at one point in my life, wanting. I don’t know why others can have that experience but not me.

What I know is that funerals are for the living. Standing in a nearly empty church, filled with symbols that have become empty to me, filled with at least as much gratitude that my grandmother’s suffering and decline had ended as grief at her departure, was as surreal an experience as I’ve ever had.

The funeral was held for my aunt’s benefit, and my father’s benefit, but also to a large degree for my benefit. I didn’t want it to be hollow. There was a measure of closure, notwithstanding the anticlimactic nature of the experience. I may not ever again enter that church, just as I will almost certainly never again be inside my grandmother’s house. Whether I look back or not, whether I regret it or not, whether I’ve had quite enough of having to adapt to yet another diminishment in my family, another door is closed behind me now.