The noisy clamor of pragmatism, historicism, and science, wrote the British political philosopher Michael Oakeshott, threatened to drown out an alternative, necessary mode of being human and remaining humane: the possibility of contemplation.  This, what he elsewhere terms (in an essay of the same title) “the voice of poetry in the conversation of mankind,” teaches us to delight in the image in itself, not for what it can offer but because it is present, it is beautiful, and it is good.

Christopher Beha’s second novel, Arts & Entertainments, is not a parable of the so-called “techlash.”  Nor are social media and the digital age the main targets of its sharp satire.  (That’s reserved, with deadly efficacy, for celebrity culture.)  Four years after its 2014 release, this works to its advantage: because there are no live-stream celebrities, Instagram gurus, or crises over data-harvesting, the novel is not limited by being about these topics.  Rather, it opens into an exploration of the challenge they provoke: the quest to preserve some small piece of oneself in a world impatient for the next, newest iteration of reality, whether that’s built by a ravenous, god-like Audience or the algorithms of persuasive technology.  A world, that is, in desperate need of something like Oakeshott’s contemplation.

Beha’s protagonist, “Handsome” Eddie Hartley, a high school drama teacher and failed actor, lives in a world where the present is under constant assault.  As the novel opens, Eddie is firmly planted in adulthood and deeply unsatisfied by his inability to make good on the potential of his youth: the same dilemma faced by his clearest literary forebear, John Updike’s Rabbit Angstrom.  Both men choose, impulsively, to change the conditions of their lives: Rabbit by leaving his pregnant wife, Eddie by selling a sex video made with his ex-girlfriend, Martha Martin, now the star of the hit TV show Dr. Drake.

Here, the characters and their stories diverge tellingly—and not simply because Eddie intends to use the money he receives to pay for his wife’s in-vitro fertilization treatments.  Rabbit Angstrom lives in an eternal present that allows him the leisure to leave his wife, find another lover, become the golf partner of the local Episcopalian priest, take a job as a gardener, return to his wife, and leave her a second time before, after three hundred pages, finally being forced to consider the fruits of his deeds in all their ugliness.  In Arts & Entertainments, the future is always now and consequences follow swiftly.  Eddie, in short order, is outed as the tape’s original owner, fired by the elite prep school where he teaches, and flamboyantly evicted by his wife, now pregnant with triplets, as she flings his possessions from windows while a gaggle of reporters look on.

In a world where the present is forcibly suppressed, acting otherwise only gets Eddie into more trouble.  When he balks at his agent’s offer of a reality show contract in order to create the time and space to reconcile with his wife, she jumps at the show—on her own.  And once production begins on Desperately Expecting Susan, Eddie finds himself trapped in a Kafkaesque panopticon in which his every action is immediately publicized and scrutinized even though he has been pointedly exiled from the show and his own family.  “A single mother with triplets is a great story,” his agent apologizes.  “You’re sort of a complication at this point.”

Finally in possession of the fame he once coveted, Eddie discovers that all the world’s not a stage, but a courtroom in which his audience is also his judge and the verdicts—like the charges—are always provisional. 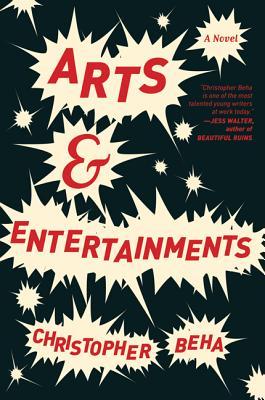 If the characters around Eddie at times feel two-dimensional despite their vivid presentation, it is because characterization, like Beha’s swift prose, works in the service of creating a world with no use for the present moment.  Like the minor figures of episodic television, they come and go with purpose, fit to swell a progress or start a scene or two.  Eddie feels somewhat less charitable toward them.  When a former student suddenly appears, he fumes: “Fuck Patrick.  This had nothing to do with him.”  That the secondary and tertiary characters resist easy classification as “types” testifies to the strength of Beha’s construction—characters slip in and out of the novel so seamlessly yet with such purpose that even Eddie notices it.  “Everything,” he suspects, “had been willed by some invisible source obscure to Eddie, all for the purpose of a story being told.  Everything had conspired to bring him to this point.”

Not even Susan escapes this fate.  Although the reader, through Eddie, knows her well, her television appearances transform her into a cipher.  This “new Susan” (in Eddie’s words) has only as much depth of humanity as the labels attached to her: she is “desperately expecting,” “a stylish art world veteran” now championing an artist who uses “melted-down G.I. Joe figurines” to create “a haunting evocation of the horrors of war”—you know, like Sid, the sadistic neighbor in Toy Story.

Susan exists fully-formed only in the memories which Eddie turns over and over in the privacy of his own mind.  Here, freed from the rush toward the future, she emerges as a quiet but stubborn opponent to the world she will one day inhabit.  “I guess this seems old-fashioned,” she tells Eddie on their first date, “but I like art with real belief behind it.  Stuff that isn’t just about provoking people.”  She speaks of the Renaissance, of art with purpose and beauty that endures beyond the immediate context of its creation.  People, too, have purposes that should extend outside themselves, and hers is as the curator, not the creator, of art, its protector and midwife, helping guide it into the world.

This conversation, which occurs near the novel’s midpoint, is answered very near its end, when Eddie finally confronts Brian Moody, an enigmatic former Catholic seminarian who now is the nation’s premier producer of reality television.  In the art world, the old Susan laments, “I can’t even tell people that I believe in God.  They find it ridiculous.  But look at the ridiculous stuff that they believe in.”  Moody is not ridiculous but dangerously earnest when he professes that, in the absence of God, “Good is whatever the audience watches”:

The more I considered it, the more I saw in the audience everything I’d been taught to see in him.  Never visible, but always present.  Many and one at the same time.  We exist for the audience—on a basic level, it created us.  The audience gives us free will, but it expects us to use that freedom in a way that pleases it.  If we don’t, we are banished to hell.

Eddie and Susan both sign over their lives to Moody (Eddie for a thousand dollars an episode and the chance to win her back) but the producer is less a Mephistopheles than a Demiurge created by a public bored in the absence of any true Creator.  Fueled by his belated discovery of soulcraft, Eddie dissents from the reign of this fickle subjectivism eager, whatever the price, for the newest thing.  His words are laden with an ironic, postmodern Gnosticism when he gazes on Moody’s many worlds and pronounces them “work that isn’t any good.”

This process of cultivating an “unseen self” leads Eddie closer to the woman he once knew; the old Susan “would call the thing he was talking about his soul.”  But when, toward the novel’s end, she speaks of “the need to grab private moments where we can,” she refers not to soul-crafting contemplation, hidden from the cameras because always unspoken, but to the need to perform for them as the harried parents of triplets.  To believe otherwise, as Eddie finally allows himself to do, requires nothing short of a leap of faith: that Susan does still love him and truly wants him back; that, even if these things are not true, his proper role in life, determined before and beyond Moody’s divine Audience, is as her husband and the father of their children, no matter the cost he must endure.

At an earlier time, Eddie would have balked at the price of his role, though not because of a fear of exorbitant figures.  As the novel opens, he is $36,912 in debt and Susan’s first, failed IVF treatment has maxed out their lines of credit.  Rather, he has gone through life with the belief that debts can be deferred indefinitely; that the money he had spent “was stored someplace in the future.”  Like Oakeshott’s image of poetry—“a wildflower planted among our wheat”—a soul’s value inheres in its fragility.  It can have as little purpose in a world where debts are endlessly deferred as in that over which Moody and his Audience-God preside.  All that Eddie is capable of is the silence of an uncertain resistance, the carving out inside himself of a space where the present is not always fleeting, where beauty and meaning do not mutate with every whim, and where the judgment passed on one’s life is permanent.