Linky Friday: From Which Other Things STEM

I tell students that I believe STEM majors have the most exciting opportunities than any other majors in college. – Emily Calandrelli, BS Mechanical and Aerospace Engineering West Virginia University, MS Aeronautics and Astronautics MIT, MS Technology and Policy MIT

[Sc1] It could be right out of Jurassic Park: “A mid-Cretaceous embryonic-to-neonate snake in amber from Myanmar“, or for the rest of us the world’s oldest snake embryo found cased in amber.

[Sc2] Fake news also applies to science headlines sometimes. Not an article, but a good back and forth here on discerning “a spitball in a giant spitball fight in this community of scientists”

[Sc3] The U.S. government is investing $3-billion-a-year in science, technology, engineering, and math (STEM) education. So how did an Intel executive with no federal or known STEM advocacy experience land the lead role? Fascinating write up on Gabriela González’s path from immigrant to running point for the NSF effort to get young girls and women interested in science fields.

[Sc4] When a scientist runs for public office, it’s the intangibles and outside factors that often decide the race as opposed to the evidence-based positions or expertise in a field.

[Sc5] The University of North Carolina is one of the finer academic institutions around, so when one of UNC’s highest profile and highest paid employees, held a press conference in which he delved into science, CTE and effects on the brain, and some sociology about how these things might affect our country, people noticed. Problem is Larry Fedora is the head football coach, and probably should have stuck to recruiting and game plans.

[Sc6] One thing science may never fully understand is the human brain. For example, turns our that first memory you have? It probably isn’t yours.

[Sc7] How an early version of Photoshop and coloring the grainy, grey-scaled images from the Hubble space telescope revolutionized how we see the universe.

[Sc8] Speaking of space, while some are still waiting for the Sweet Meteor of Death to come, how about a double asteroid, whose two parts are orbiting each other as they careen through space.

[Te1] The enemy of my enemy is my friend, or at least Microsoft and Walmart are finding common cause in the cloud to compete with Amazon.

[Te2] Asia-Pacific factories are leading the way in high-tech, digital technology in production and manufacturing.

[Te3] How’s this for counter-intuitive: tech reporters who limit their own tech usage.

[Te4] China is leading the world in surveillance technology, facial recognition, and related fields, but don’t ever ask the question “can this be used for good?” when dealing with a totalitarian regime, since that answer will always be a resounding “no”.

[Te6] This is sure to stir debate: studies are starting to come out that tech usage is affecting ADHD-type symptoms.

[En1] There is no such thing as perfect, but modern tech and precision engineering sure are making a run at it.

[En2] “Is a race car driver an athlete?” is an old debate, but according to world champion Jenson Button, it was a lack of understanding the engineering and tech that went into his car that held him back initially. “It almost ended my career being bad at engineering and not having any understanding of a racing car.”

[En3] This is just one example of local reporting on it, but robotics camps are everywhere these days for students, and many are hoping they do for engineering and sciences what little league does for future pro players.

[En5] If you are going to jump out of plane from nearly 5 miles up without a parachute, you better have your engineering of the stunt down tight. Here’s the story of Luke Aikins not dying thanks to “a rather nervous civil engineer, John Cruikshank, who helped design the audacious stunt”.

[En6] People think that the long-promised drone delivery systems will have a lot of high tech involved, turns out the biggest engineering challenge isn’t the drone but the hook.

[Ma1] Who needs a formula when you can just knit two throw pillows and compare? This Carthage College class is teaching math through knitting.

[Ma3] Fighting a fear of math, and how to get over it. I can relate: “I studied in an education system that said science and math are the important factors … and each student was analyzed and measured by their math and science grades.”

[Ma4] This is fun. Trust your math project by making a cardboard boat. With you in it.

[Ma5] For people who have a hard time learning math, making it hands-on might be the ticket to success.

[Ma6] We kind of figured this, but someone actually did the research on it; coffee, or at least in this case the scent of coffee, appears to boost the ability to do math.

[Ma7] There are many stories like this on, from many different school districts, of not nearly enough math teachers to go around. 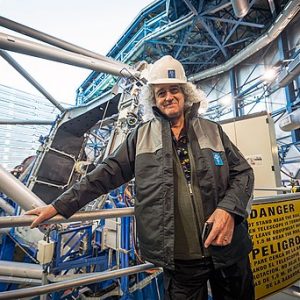 Featured photo: On 28 and 29 September 2015, ESO’s Paranal Observatory welcomed a very special visitor — British rock guitarist, singer, songwriter and astrophysicist, Brian May. Famed for being the lead guitarist of the legendary rock band Queen — May also has a passion for astronomy. This picture shows Brian May in one of the domes of the ESO Very Large Telescope.