Where Do Metro Denver’s Next Million People Go?

Denver is booming. The River North (RiNo) area along the South Platte River north of downtown has sprouted an entire flock of construction cranes. The Highlands neighborhoods in west Denver are in the midst of rapid gentrification. The Denver Post recently identified three ZIP code areas where home price appreciation has been nearly 40% over the past year. The last time I received the appraisal notice from the county on which my own property taxes would be based, I was tempted for the first time in my life to challenge it. Then I looked up the recent selling prices for comparable houses in the general area where I live. Sheesh. On the business side, there’s at least a couple of million square feet of office space in various stages of planning and construction around the metro area.

Recently I’ve been doing some of my observances for the Colorado bicycle cult in the area where northwest Denver, two of the big inner ring suburbs, and some unincorporated county land all mush together [1]. To use a polite term, the area has historically been underdeveloped: used car dealerships from tiny to huge; used car parts stores with stacks of broken down cars; seasonal fireworks stores (except when there are state-wide bans); a varying number of strip clubs; liquor stores (although not a grocery to be seen); and light industrial firms of this and that sort, some interesting but most not [2]. I have always found this somewhat surprising, given the area is only a bit over five miles driving distance from downtown Denver, Coors Field, the Pepsi Center, and Mile High Stadium, with straightforward access to all of those. I have recently become a bit infatuated with the area, wondering if it will be another piece of the Denver boom. 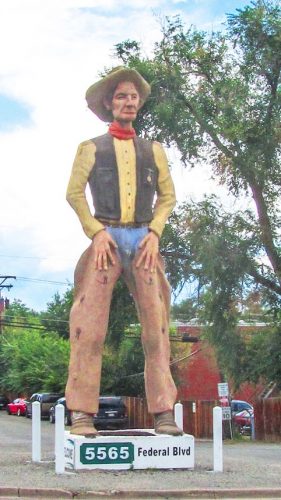 The area has some strikes against it. The Clear Creek flood plain bisects it [3]. Highway I-76 runs along the flood plain, largely elevated. A high-voltage power line with relatively old-school ugly pylons also runs along the flood plain. In combination, these limit the number of crossings from north to south. The area along the river has a large number of irregularly-shaped ponds: gravel pits that provided much of the aggregate for the concrete and asphalt used for Denver’s earlier growth. Some of the aggregate companies are still in operation. The main north-south road is Federal Boulevard, which is something of a nightmare: four narrow lanes, not divided, most of it without sidewalks, odd old buildings at varying distances from the road. The most memorable thing along Federal is the painted concrete cowboy shown here, who guards the entrance to a couple of the several trailer parks in the area.

The biggest barrier to development is that most of the area is under the jurisdiction of Adams County. The county government recognizes it could all be much more valuable and commissions redevelopment plans from time to time. The most recent one was released in 2014. Little has come from such studies because the county is poor. The surrounding municipalities are either unable to annex the area (Denver’s borders are fixed except under specific conditions), or not interested (the suburban cities would be required by state law to improve the infrastructure pretty promptly). The county’s situation contrasts sharply with Denver’s recent $40M renovation of Brighton Boulevard, which until recently was in just as bad condition. $40M would go a very long ways towards making Federal Boulevard and Clear Creek into an attractive foundation on which to build. 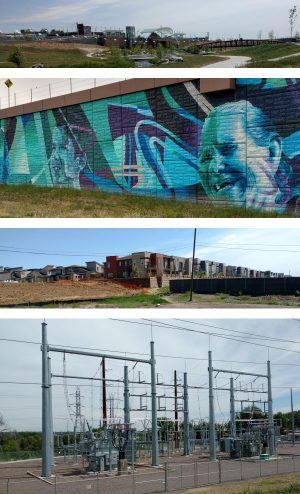 There are reasons to believe things may finally be turning around for the area. There is not one, but two new train stations. The Westminster station on the B Line commuter rail line (upper image) is on the north side of the river and the Federal Boulevard station on the G Line light rail line (second image) is on the south side. Both of those are about a 12 minute ride to Union Station in lower downtown (LoDo) Denver. Most places in the city of Denver are farther from downtown than that. A sizeable new group of row houses is going up (third image) in the unincorporated county area a few hundred yards east of the Westminster station. These are not inexpensive units: the prices run from $600K to up past $800K. The beginning of the trendy support services has started to appear near the houses. (And yes, it’s Denver, so there’s a craft brewery.)

Up the hill on the other side of Clear Creek from the row houses, Xcel Energy has finished (bottom image) a large new substation for the area. The substation will have minimal effects on rates; Xcel is always building new infrastructure around Denver and the continuing budget for that is already “baked in” to the rates. Water and sewer for the area, including the new row houses, is provided by a small independent water and sanitation district covering perhaps a couple of square miles. Rates in this type of district tend to skyrocket when development arrives and large new capital construction projects are needed. (My daughter lives in such a district in another part of the Front Range corridor where growth hit recently; her sewer bill is abruptly double what mine is.) The trailer park customers are probably in for a rude shock, or perhaps have already experienced it.

I’m not an urban designer, but I can stand in a couple of different places along the bike paths and see where things could go. The earth movers will sculpt the old gravel pits into more aesthetic shapes. The aggregate yards and old car dumps will go, replaced by office parks of varying sizes and shapes. Stylish new power pylons will replace the old skeletal towers. Some of the industrial buildings will remain, converted into hipster eateries or clubs. The shabby houses and thinly-paved streets between the substation and the Denver city boundary, and the working-class Hispanic families living there, will be replaced by a much more upscale neighborhood. The steep-ish hillside overlooking the river where the cowboy’s trailer parks are will be million-dollar condos, cunningly oriented to avoid the interstate. If I can see it, I’m sure there are money people who can too. I hope they keep the cowboy, though, just for old times’ sake.

[1] Arvada and Westminster, the two inner ring suburbs, are both cities with populations >115K people. For those who are not familiar with urban structure in the American West, small numbers of large suburbs are the normal arrangement. Adams County, which controls the unincorporated areas, has a total population of just over 500K, the bulk of it in cities or unincorporated areas squeezed up against Denver. For those who enjoy fooling with Google Maps satellite view, (39.805214, -105.025290). ?

[2] My favorite of the little businesses, where I stopped recently to satisfy a mental itch, fabricates custom bits for routers and shapers. Suppose you’re renovating a 1905 house with unique but damaged crown moldings; this firm can fabricate the custom carbide bit/bits to match it. And if you’re really hard core, they’ll make the blades you need to do the job with a hand router. ?

[3] Clear Creek is somewhat larger than the Los Angeles River in both length and drainage area. It is considerably less engineered :^) It is one of several small rivers emerging from the Front Range mountains, all combining to form the South Platte River headed for Nebraska. ?