[Mu1] NPR host Sam Sanders on why he “actively hates theme songs,” on his radio program.

[Mu2] Nashville, and country music by implication, is “a drinking town with a music problem.” But my word, is drinking lucrative in country music.

[Ar2] From tagger to convict to art teacher, an Ultra fascinating story 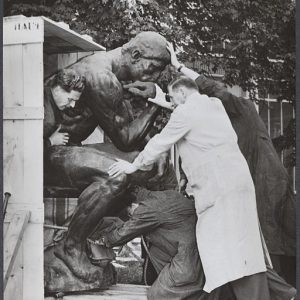 Rodin’ “The Thinker” being moved to museum

[Th1] “Put out your shingle and ply your trade,” the old saying goes, so these aspiring philosophers set up shop in the park with their “Ask-a-Philosopher,” sign.

[Th2] It sounds like comedy sketch, but in the hometown of Kant soccer meets philosophy at the World Cup in Kaliningrad.

[Th3] Science and philosophy have always brushed edges, but in areas such as AI and machine learning, origin of life, and extraterrestrial life, some want to lab test out theories of thought.

[Pe1] Most folks who take a sociology class have to read Weber, but apparently few get it right either in learning or teaching.

[Pe2] People in crisis often turn to their faith, but attempting to computer model that behavior can be both insightful and messy.

[Pe3] Education is rightly viewed as a source problem for many social ills, but is a root cause to problems from urban planning, zoning, and even property values being adversely affected by entitled parents and their influence on schools?