The Republican Party Was Not Always This Way

Whenever someone says Trump is uniquely, historically bad on Twitter, “no, this is just a logical continuation of what has been going on in the Republican Party since the 60s” is sure to follow. As someone who supported Republicans through about 2005 or so, I’ve been curious. Was I simply bamboozled before by the Republican Party and ignorant of their ills?

I don’t think I was.

The White House today welcomed a Federal advisory panel’s recommendation to cut legal immigration by one-third. But the proposals met fierce opposition from Hispanic, Asian-American, Roman Catholic and Jewish groups, as well as from the National Association of Manufacturers.

Barbara Jordan, chairwoman of the panel, the Commission on Immigration Reform, delivered the plan to President Clinton, and he congratulated the panel. “Consistent with my own views, the commission’s recommendations are pro-family, pro-work, pro-naturalization,” he said.

Mr. Clinton said the panel had “laid out a road map for Congress to consider.” His press secretary, Michael D. McCurry, said that “the President indicated to Barbara Jordan today that he will support such reductions,” which would represent the biggest change in immigration policy in more than 40 years.

In addition, Mr. Clinton said the proposal “appears to reflect a balanced immigration policy that makes the most of our diversity while protecting the American work force so that we can better compete in the emerging global economy.”

Who’s economically anxious now? (OK, not now, but in 1995 Democrats were.)

Among the changes proposed were to impose substantial fees on employers who employ foreign workers within the United States. Additionally, they were required to speak English and have at least a baccalaureate degree.

They also sought to cut the number of refugees admitted by more than half.

The panel also recommended reducing the number of refugees to 50,000 a year, down from the more than 100,000 admitted in each of the past five years.

This is a staggering cut. This was an administration that suffered fainting spells when Republicans suggested reducing the increase of costs of some programs somewhat less than they had increased previously.

Where were the Republicans? Here:

Representative Dick Armey, the Texas Republican who is the House majority leader, said: “The commission fails to tell us why we should so dramatically reduce legal immigration. It is long on recommendations, but short on analysis.” He said the proposals were “a misguided attempt to make legal immigrants the scapegoats for America’s problems.” [emphasis added]

In 2018, these positions have completely reversed. Dick Armey’s quote would have make for a good tweet from a prospective Democratic presidential nominee today. Bill Clinton, meanwhile, sounds like his friend Donald Trump does now:

Barbara Jordan, who led the commission whose report Clinton so loved, delivered the keynote address at the 1975 Democratic National Convention (the first woman to do so). She was a border security hawk:

It is far better to deter illegal immigration than to play the cat and mouse game that results from apprehensions followed by return followed by re-entry. To accomplish a true deterrence strategy will require additional personnel as well as a strategic use of technology and equipment. We will also require new measures of effectiveness because apprehensions alone cannot measure success in preventing illegal entries. Our goal should be zero apprehensions-not because aliens get past the Border Patrol but because they are prevented entry in the first place.

She was pro-deportation, even for long-time immigrants to whom she rejected amnesty:

There are people who argue that some illegal aliens contribute to our community because they may work, pay taxes, send their children to our schools, and in all respects except one, obey the law. Let me be clear: that is not enough.

The needs of refugees made her less inclined to allow them to settle in the United States rather than more:

Certain legal immigrant populations may impose other costs: refugees often have special needs for health and other services, making resettlement significantly more costly than overseas solutions to refugee problems; elderly new immigrants are more likely to draw upon public services than elderly native-born Americans or immigrants who came to the United States at a younger age.

Nevertheless, she rejected the label of “anti-immigrant” on the most Trumpian of grounds:

We decry hostility and discrimination towards immigrants as antithetical to the traditions and interests of the country. At the same time, we disagree with those who would label efforts to control immigration as being inherently anti-immigrant. Rather, it is both a right and a responsibility of a democratic society to manage immigration so that it serves the national interest.

This did not make her unique within the Democratic Party; it made her fit right in the Democratic Party. She gave the opening statement at the House Judiciary Committee hearings when the House took up the impeachment of Richard Nixon. She was an early rumored running mate to Jimmy Carter. She was a noted and worthy Civil Rights leader. Her legacy of service to her party is secure.

My main takeaway, however, is not about the Democratic Party. It’s that the Republican Party was not always the way it is now.

Calls to ban Muslims from entering the U.S. are offensive and unconstitutional.

The words “a misguided attempt to make legal immigrants the scapegoats for America’s problems” could not escape an elected Republican’s lips now, but it was run-of-the-mill at the time, just an echo of Reagan’s many positive comments about immigration. 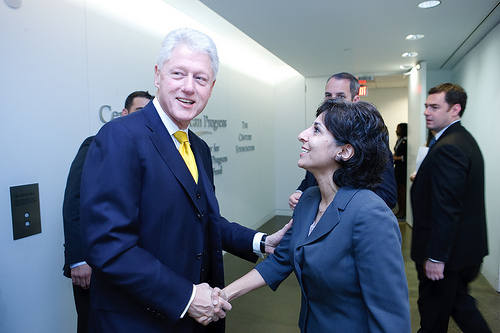 Has the Republican Party always been vile and racist ever since the glorious realignment caused by the Civil Rights Acts? Perhaps, but if you cite the disparate impact of immigration controls on people of color as evidence of present-day racism among Republicans, where is the reckoning among Democrats who held seemingly identical views to those Trump holds now? Clinton has had numerous opportunities to speak of his regrets, and he’s often taken those opportunities, disowning many of his signature achievements of the time. But he does not mention his opposition to legal immigration.

Not that we see Republicans grappling either. No one is incentivized to grapple with it. I’ve searched and found some Daily Caller articles scolding Democrats for their twenty-three year flip-flop, but I don’t see them confront the Republican Party on the same grounds. Similarly, I see many Democrats citing Reagan on immigration so as to scold Trump, but they seem to be conveniently unaware of Clinton’s views on the same topic. The flip-flop remains mutual, and this mutuality is unexamined.

The Republican Party certain harbors racists among its elected officials right now. Perhaps it always has. But I’m not convinced the Democratic Party has long been better.