Paul Manafort is in custody after a US District court judge ruled he had violated the terms of his pre-trial release. Special counsel Robert Mueller’s investigation had filed additional charges alleging Manafort had attempted to tamper with witnesses in the six months of house arrest.

US District Judge Amy Berman Jackson announced the ruling in court Friday. Manafort was immediately taken into custody. He appeared calm. He was led to a nonpublic area behind the courtroom, turning to briefly wave at his wife before going back.
Jackson found that in light of the new allegations from special counsel Robert Mueller’s office that Manafort and his longtime associate Konstantin Kilimnik had repeatedly attempted to call and text two former business associates starting in February — an effort that one of those associates told an investigator he understood to be an effort to “suborn perjury — she could not craft release conditions that she thought would be sufficient to protect the community. Manafort did not pose a physical danger, she said, but he presented a danger to “the administration of justice.”

“I cannot turn a blind eye to these allegations … You have abused the trust placed in you six months ago,” Jackson said.
Jackson denied a request by Manafort’s lawyer to put her order on hold to give the defense an opportunity to appeal her decision, a request that special counsel prosecutor Greg Andres opposed. Jackson said she was concerned that in light of her order, Manafort’s risk of flight had just “multiplied.”

Jackson rejected a request by Manafort’s lawyer to consider imposing a clearer “no contact” order covering his communications going forward in lieu of incarceration, arguing he had “largely” been in compliance with her pretrial release conditions until now.

“This is not middle school. I can’t take his cell phone,” Jackson said.

He was in court to face superseding charges accusing him of witness tampering, charges to which he pleaded not guilty. Manafort had previously been out on bail on house arrest, but the government requested that his bail be revoked.
Special counsel Robert Mueller has brought additional charges against Manafort and longtime associate Konstantin Kilimnik, accusing them of obstructing justice.

The new charges were unsealed last week against Paul Manafort and Kilimnik, who worked in the Ukraine offices of Manafort’s firm, Davis Manafort Partners International (DMI). Mueller is accusing Manafort and Kilimnik of tampering with two witnesses. Manafort is awaiting trial in federal court in Washington and Virginia on felony charges related to his work on behalf of Ukrainian interests.

The witnesses, who had worked with Manafort as he represented a pro-Russian political party in Ukraine, have told the FBI that they believed Manafort and Kilimnik were trying to get them to lie about the nature of their work.

US District Court Judge Jackson was not impressed with Mr. Manafort’s conduct:

Jackson chastised Manafort for his behavior in the case over the previous months, noting it was not the first time she had to address his compliance with her rules. Earlier in the hearing, she had pointed to a previous incident in which prosecutors accused Manafort of violating Jackson’s order against making public statements prejudicial to the case, citing his role in editing an op-ed that ran in a Ukrainian newspaper about his case. Jackson did not find him in violation of the order, but warned him to be careful going forward.

The judge said she was troubled that Manafort seemed “to treat these proceedings as just another marketing exercise.” 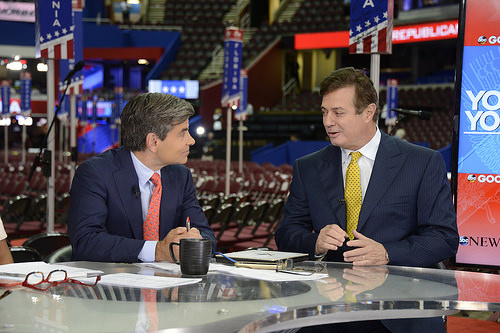