The Moral Authority Hierarchy of Loss

Gone, I say and walk from church,
refusing the stiff procession to the grave,
letting the dead ride alone in the hearse.
It is June.  I am tired of being brave.
–Anne Sexton, The Truth the Dead Know

Sitting down to write about the moral authority hierarchy of loss in the current political landscape, I found I did not know where to begin. Death, although universal, is too terrifyingly intimate to handle indelicately. Death has been too close to me for too long. But the use of the dead as bludgeons to further essentially ephemeral agendas is abhorrent. And we are becoming entirely too comfortable with it.

Not long ago on social media, I was scolded by a stranger for criticizing the mother of a school shooting victim. “She lost a child. She can say whatever the fuck she wants,” was the rationale. The mother in question had been awarded intractable moral authority on account of something horrific that had happened to her, as long as she was saying something the commenter agreed with. To this, I responded that I had lost a child as well–did that mean I could say whatever the fuck I wanted, too? The answer was garbled and insulting, as would be expected. 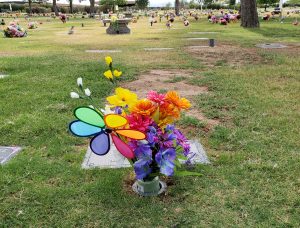 Fifteen years ago last Wednesday, I said goodbye to my daughter, who was just three months shy of her third birthday. She had been born with several congenital heart defects, and though very talented surgeons and cardiologists had tried to save her, she lost her fight. Last Thursday, a family acquaintance lost her four year old son to similar, far more numerous, congenital defects. Does this afford us, mothers of dead children, intractable moral authority as well?

It does not. We are not unique in our epic and overwhelming pain. For as long as there has been life, there has been death. There has been loss and catastrophic heartbreak. There have been grieving mothers and wounded fathers. To live is to accept that life will become a collection of losses, and we must find a way to continue moving forward. And yet we are singular in our sorrow, for each life is beautiful in its own right, simply by having touched the lives of others. Therefore, death is the great equalizer.

Insisting that those who agree with us have the right to remain unchallenged if they become public faces of tragedy is to use death as a way to silence opposing opinion. It shows less compassion and empathy than we imagine we are displaying. It’s an attempt to take away the stark reality of death, allowing us to minimize the ache of knowing that behind each disparate representative of this or that cause, there is a family reeling from an enormous loss of potential, of dreams, of hope. There is an empty space at the table. A room left uncleaned. Shoes left in the hallway. A voice no longer heard from another room. And when the chaos of the immediate event recedes, and public attention wanes, there is the wound that won’t heal.

Whispers and small laughter between leaves and hurrying feet
Under sleep, where all the waters meet.
—TS Eliot, Marina

No moral authority in loss

There’s no moral authority in any loss. It is a vast, unknown sea that those left behind must learn to navigate without tools and often without hope. There are distant shores on the horizon, but no promise of reaching them any time soon. Awarding transient moral authority to survivors complicates the grieving process. It’s complicated enough already.

While those who have lost loved ones in tragic events may choose to highlight a cause, they must also be allowed the grace of identifying their missteps and misstatements. Using their loss as a way to shield them from possibly valid criticism hinders debate, and actually damages their chosen cause. And it reveals a deep, ugly cynicism on the part of their champions. It is not noble to use the pain of others towards a political end. It is callous, and it is cruel.

I shall not murder
The mankind of her going with a grave truth
Nor blaspheme down the stations of the breath
With any further
Elegy of innocence and youth.
—Dylan Thomas, A Refusal to Mourn the Death, by Fire, of a Child in London