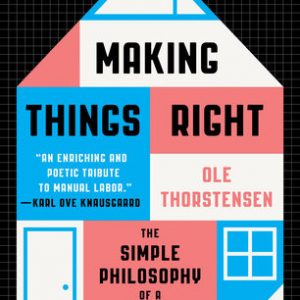 Ole Thorstensen is a craftsman, both as a carpenter and as a writer, and there is something patiently workmanlike in the way he layers simple details, one after another, to build this straightforward and elegant account of a loft renovation he undertook near Oslo. Taking us through all the stages, from bidding to budgeting to building, he gradually brings out the simple pleasure of making things well, along with the “blend of independence and recognition of professional authority and discipline that he finds “one of the best things about a craft”. His is hard works and not without its risks, but Thorsten conveys as well the deep satisfaction of teamwork, personal integrity, and pride in labor.

I was also struck by his random observations, for instance that the radio weather report “almost entirely relates to leisure time… The fisherman at sea, the farmer, and the carpenter, those of us who do not choose when to be outside in the elements, we are no longer part of the conversation when it comes to weather.” He is not particularly a griper though, leaving the reader to come to their own conclusions about the question hovering over a book such as this, namely, why are the trades in such marked decline? A well-trained plumber or electrician can earn a healthy income and be relatively assured of steady work. It has been an ongoing argument of mine that the university where I work should do more to bring in apprentices in the trades that we use and where we will be facing a severe shortage within the next decade or so. The skilled trades do seem to be somewhat undervalued, but it’s not clear why since they create the material conditions of our common lives.

While Thorstensen never directly addresses shortages in the trades (which might not be a problem in Norway), he does address he fact that globalization has put much thing-making away from us. “The fundamentals of production are being further and further removed from sight. We know less and less about it. We shield ourselves from noise and dirt, and our attitude towards practical work is another example of this distaste… But craftsmanship can never be clean and sterile, as images of the final product would have us believe.” It also seems as if working with ideas takes precedence over more tactile work, a bias perhaps dating to the Enlightenment. And yet, plenty of philosophers have been fascinated with building and often quite skilled thing-makers as well.

And I do think there is a growing fascination with thing-making. So many of the small boutique stores in our city, wherein young people run through their trust funds, sell “artisanal” items that are hand-made and unique, and perhaps a bit overpriced. But I thin the much-noted quest for “authenticity” among millennials is a response to the same sort of discomfort that Thorstensen addresses when he makes when he briefly and amusingly comments on the ubiquity of Ikea furniture: “The short-term, interchangeable nature of these objects makes it difficult to relate to them in a satisfactory way. I am, however, glad that a distinction in quality exists, where I represent the other side, an alternative with an understandable, intrinsic value.” It is, perhaps, a matter of differing time-frames; the kitchen table that my grandfather made for us when I was an infant is in good condition four decades on, a statement of stubborn defiance towards a Heraclitian world of flux and decay. My grandfather is not here like the table.

This is a book about the pleasures we get by working together and making things that are beautiful and will last, one of which, incidentally, is this book.