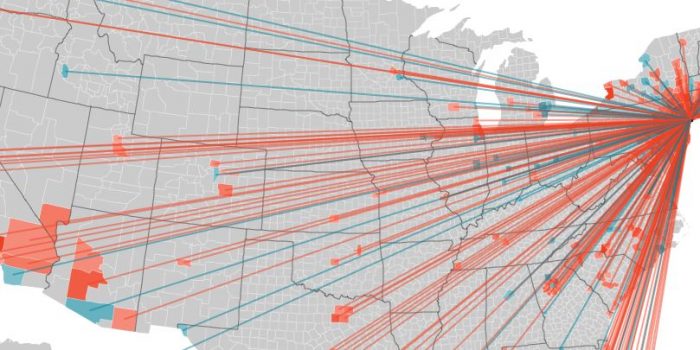 The age of the megatropolis is likely not behind us, but I nonetheless found this quite interesting:

In this year’s edition of our Best Cities For Jobs survey, we found that six of the 10 metropolitan areas with the fastest job growth are either mid-sized (150,000 to 450,000 total nonfarm jobs) or smaller (less than 150,000 nonfarm jobs). They also account for 18 out of the top 30. Smaller metro areas dominated job growth in a number of sectors, including manufacturing (all the top 20), information (all of the top 10) jobs and, less surprisingly, natural resources, construction and mining.

These trends are also reflected in the new U.S. Census Bureau metropolitan area population estimates for 2017, which show a significant increase in domestic migration away from the 53 major metropolitan areas with populations over a million and toward the 54 middle-sized metro areas in the 500,000 to 1 million range. In 2017, the midsize metro areas gained 271,000 more net domestic migrants than the major metro areas. (The biggest two, New York and Los Angeles, had an enormous net loss of 209,000 — 0.95% of their combined populations).

Granted, it’s Kotkin! The part about domestic migration has been explored by myself and others. New York City and Los Angeles look like they’re hemorrhaging people in the domestic migration maps, but it’s more that Americans are leaving but the places are extremely popular with immigrants and so that’s enough to compensate. The job growth data is more interesting. Individually medium and small cities are by definition not large, but they do add up. I suspect this also ties in to points I’ve made about the different fates of small cities in the east versus the west.