The Triple Lens of Art History 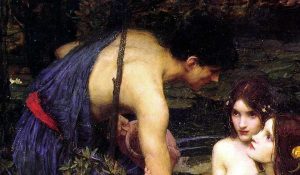 Apparently, there was a bit of controversy recently over the removal of John William Waterhouse’s painting, Hylas And The Nymphs.

When looking at a historical painting, we often get a triple image interpretation, where our 21st century eyes view a 19th century interpretation of a 3,000 year old myth. Waterhouse’s Hylas and the Nymphs is a terrific example of these overlapping interpretations and sadly, the Manchester Art Gallery missed an opportunity to have a real conversation about the work.

Because the work actually knits together ancient mythology with modern events beautifully.

Upon a casual observation, without any knowledge of its context or history, we see an image of a young man, pausing at a pool filled with beautiful young naked women. At this first glance it seems like a high toned version of the typical young man’s Playboy fantasy, a handsome lad enjoying being in control and free to select his pick among any of the ladies.

Which in this view, certainly lends strength to the feminist critique that Waterhouse and the Victorian painters were objectifying the female as passive vessels of the male gaze.

But of course, Waterhouse and those who viewed the painting had an understanding framed by their study of the classic mythology. In the myth, Hylas was pulled by the women down to his doom, and the painting was understood to be an allegory of the danger of sexual abandon.

But in this view, it could also be seen as an allegory for the frailty of the male psyche itself. Although the Victorian man and his 20th century Playboy fantasy counterpart imagined themselves to be in control, the lord of their manor, there was a nagging underlying sense that they themselves were captive to their own sexuality, which could easily be manipulated by the females they objectified.

Hylas could access the sexual pleasure of the maidens, the painting tells us, but only by falling into the depths of the pool where he would be out of his element and helpless. This becomes a meditation on the Victorian view of sexuality as something dangerous and treacherous.

But their view of sexuality was very different than the original Greek. In the classical myth, Hylas is not just any lad. He is the son of King Theiodamas, who was killed by Hercules. Hercules then took Hylas as a lover and protégé, which was customary at the time. In antiquity, it was common for older more powerful men to use handsome young boys for sexual pleasure, and when the boys grew into adulthood, they were released to take wives of their own.

In this view then, the allegory could be seen that it was Hylas who was an objectified sexual being. When Hercules killed his father, Hylas’s opinion as to whether he wanted to be sodomised by his father’s killer was not recorded, because it apparently wasn’t important. Hylas was groomed and seduced by his captor, being trained and educated while being used sexually until the time came for him to cross the boundary between childhood and adulthood.

So the myth then can be seen as Hylas growing into manhood, losing his youthful beauty. In this sense, Hylas’s fall into the pool is his symbolic break with his role as a sexualized object as his desire turns from pleasing Hercules to being pleased by women. The women are not pulling him to his doom, but welcoming him to his rightful life.

So why does the myth refer to his plunge as a catastrophe akin to death?

Because the myth was composed from the point of view of Hercules, who was grieving for the loss of his beautiful sexual companion. Because then as now, the desires of influential and powerful men were privileged over those of the less powerful.

But I would see it that way, wouldn’t I?

Because I am viewing it through the lens of a 21st century male in the era of #metoo. Viewed though our eyes, the painting and the myth combine to make a commentary on our current era and events, quite different than was imagined by the ancient Greeks and the Victorians.

Chip is Chip. We all know Chip.