Nobody Won 2016 Election in a Landslide 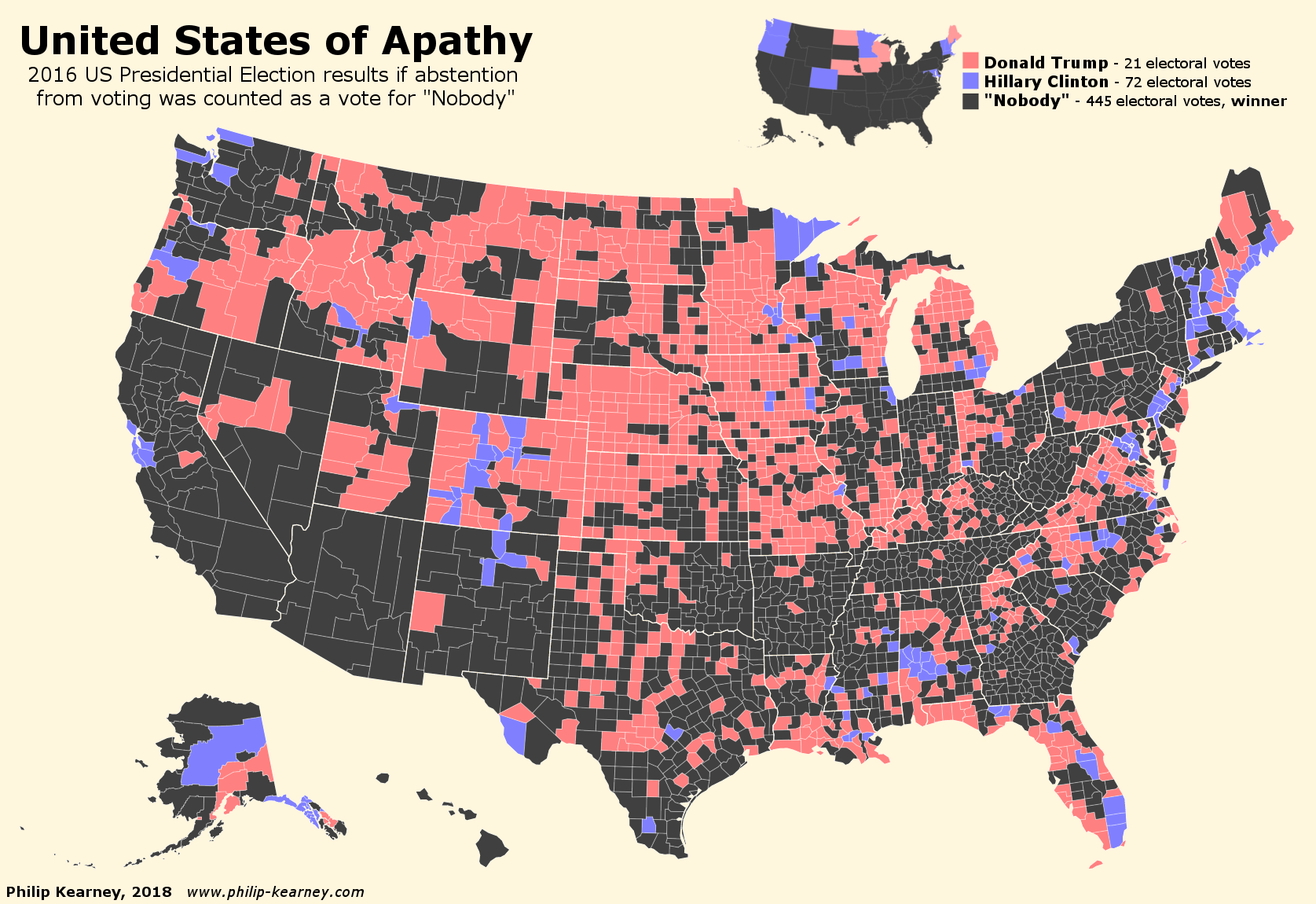 “United States of Apathy” by Philip Kearney. Used with permission.

Donald J. Trump won the 2016 presidential election. But he did not do so by getting the most votes. That honor belongs to….

True, Hillary Clinton received roughly 2.9 million more votes that Trump. But she didn’t get the most votes either.

Nobody did. Nobody also won the electoral college in a landslide.

Or at least, if all non-votes were tabulated as a vote for “nobody”. With a shade under 56% of all eligible voters casting a vote in the 2016 Presidential election, it turns out the most important voting demographic might well have been those that stayed home. 86 million of them.

This large group of non-participants has now been visualized by cartographer Philip Kearney, and the remarkable image brings up plenty of questions about the lessons learned, and narratives formed, by the 2016 election of Donald J. Trump. 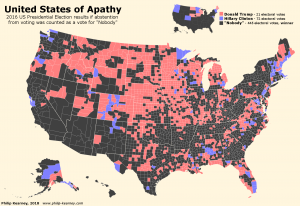 “United States of Apathy” by Philip Kearney. Used with permission.

Let’s take two examples here. Trump won West Virginia by nearly 42 points. Ever since, news reports have labeled the Mountain State “Trump County” for that strong result in favor of the President. California went for Clinton by over 4.2 million votes, a massive number even by the standards of the predictably blue Golden State. But even in those victories, Nobody dominated.

Same for large swaths of the country. Dependably deep red Texas and Georgia suddenly appear spotty when Nobody gets a vote. There is some carry over from the normal county results map. Urban areas are still solidly blue, but even at that, there are jarring omissions that have turned to Nobody grey, such as LA and New York City. The Midwest stays mostly red, but there are large streaks of grey through the rust belt, where so much ink and digital characters touted Donald Trump’s conquering of such areas.

Now compare this to the “Swing Map”,

The swing map is county margins from United States presidential election (2012) to United States presidential election (2016), relative to the national swing of 1.76% toward Republicans. Deeper blue is greater than 30% Democrat, Deeper Red greater than 30% Republican and the scale shades accordingly. This is closer to what we usually see used in post-election coverage.

Fascinating, but what to make of it?

Analysts have plenty to unpack from such a data set. There are many factors, of course. Areas such as NY and CA that have long been one-party dominant naturally see lower turnout from the minority and often their own majority. The reverse is true in deep red areas. And there is validity to the specific dynamics of the 2016 race perhaps being unique. The known qualities of Hillary Clinton and the pre-made celebrity of Donald Trump made for a race like we have never seen before.

But perhaps it’s time to discuss how Nobody can win a Presidential Election. However you want to digest the data, with only 56% turnout for a highly contentious national cycle, there are many voters who are disaffected, disengaged, and otherwise disconnected from the processes. The flip side to all the emphasis on voter turnout is that those that vote by staying home often decide elections as much as the ones going to polls. The focus of the political apparatus is understandably on the engaged voters. That is where the fundraising money and political power lie. But as a people we should ask some hard questions about why those 44% don’t take part, and how to engage them again. Until then, Nobody will remain a formidable candidate in every election.