By a thousand cuts.

Alfie suffers from a rare neurological disease that doctors at the hospital have been unable to treat. Alfie’s parents want to take him to a hospital in Italy that has offered to provide care and treatment and to do their best to combat the medical condition, but doctors at Alder Hey Children’s Hospital in London say Alfie’s condition is too far gone and they want to pull his life support and end his life.

I’ll be honest with you, I find myself growing numb to these stories. Not because it doesn’t matter, or because it doesn’t affect me, or that I agree with the court’s decision—it’s that it’s too horrible to fathom. I’ve lost a child to circumstances no one could control (congenital heart defects), and my heart and mind recoil in horror and revulsion at the thought of bureaucracy deciding she wasn’t worth fighting for. We were able to try everything our insurance allowed, we had the best surgeons and care, and we had nearly three years with her. But would a bureaucrat have deemed her life worth prolonging, especially with the uncertainty of a favorable outcome? 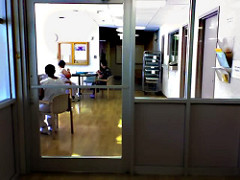 What do we become when we cease valuing life as a society? Iceland has a 100% abortion rate for Down Syndrome babies. (America isn’t much better: ours is somewhere like 90%.) The Netherlands has practiced infant euthanasia for some time. I’ve read dispassionate arguments stating that infanticide has been practiced throughout human history and is therefore more commonplace than our delicate, modern sensibilities allow, to which I’d counter that the rise of Judaism and Judeo-Christianity readjusted humanity’s baser nature, focusing on the preservation of life, regardless of its imperfections and inherent difficulties. And one only has to give the bulk of humanity’s literature and history a cursory glance to see that valuing life is normal, human behavior.

What isn’t normal is allowing government to control who lives and dies outside of the criminal justice system (which is actually an oversimplification on my part for the purposes of brevity). But we can look at the UK as a model for what not to do, as the British people have been slowly conditioned with each new iteration of the Nanny State, inoculated against governing themselves. Ceding control of the well-being of one’s children to the government seems counter-intuitive initially, but when you take into consideration the infantilization of adults in Western culture—adolescence that extends into one’s 30’s, the insidious idea that one must sacrifice liberty for safety—giving up our children to our betters seems only natural.

Children of the state

And then, suddenly, you can’t homeschool your children without breaking the law (Germany), or take your terminally ill child to specialists in another country. The helplessness these parents must feel breaks my heart. This is what civil libertarians warn against when the push for socialized (“universal”) healthcare results in monstrosities like Obamacare, which was always meant to fail and leave us no option but single-payer healthcare. Single-payer, government-mandated healthcare is handing the faceless bureaucracy unfettered access to your most intimate information, with which they can then do anything, including decide whether you live or die. Whether you “deserve” that liver transplant for your congenital liver disorder when it seems you may have had a few drinks over the course of your life. Whether your child, severely ill and yet still alive—still the possessor of your heart and soul—should be allowed to continue breathing.

All of the criticism directed at “corporations” for treating people like numbers on a spreadsheet becomes reality on a national scale, except when government is the sole provider of healthcare (or education, or whatever), the consumer has nowhere to turn for better options. At least not anywhere the average person can afford. With corporations, competition keeps overreach in check. With government holding a monopoly, we’re at the mercy of the leviathan.

And so are our children.