How To: Make A Simple Red Sauce

I am 37 now. I have a wife and three kids. Those three kids are 4, 9, and 16, respectively. “You spaced ’em out! That’s good thinking!” is what you might be thinking and, for the sake of this conversation, yes, we absolutely definitely intentionally spaced our children out.

I do most of the cooking, not because my wife cannot cook, but because its fluidity does not appeal much to her. She prefers baking, which is rigid, and firm, and which requires adherence. Cooking does not require any of those.

Cooking for five is, in theory, easy. I come home, cook whatever I want, and then stare at everybody until they have gratefully cleaned their plates of whatever it is that I have made for them. In practice, cooking for five is difficult, because all five people often want five very different things. This is stupid, and all of my children should be grounded, but until I am given total grounding authority, a more workable plan is finding meals that everybody is willing to eat. Here, for those wondering, is that list, as nearly as I can figure it:

Kids are the worst. However, if I do make pasta with red sauce, everybody will eat it, and happily too. Over the years, this has lead me to hone a recipe that is designed to allow each of my children, and my wife, maximal in-dish creativity – my wife likes sauce with veggies, my oldest daughter likes sauce with meats, my son and younger daughter each prefer sauce with nothing, and I prefer sauce with everything.

It isn’t, both because you probably aren’t Mario from the Mario Brothers, but also because I am not Italian. This is merely a simple, functional recipe that allows for easy modification depending upon the cook’s, and family, preferences. 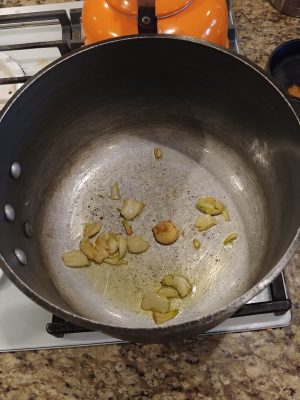 1. Put Some Olive Oil And Some Peeled Garlic In A Sauce Pan

I was recently giving this recipe to a younger person. He was extremely concerned about the amount of both. My first answer – “Dude, whatever you like, it’s fine!” – was apparently insufficient, so I was forced to conclude that 2-3 tablespoons of olive oil and 5-7 mashed-on-the-flat-of-a-knife garlic cloves was probably a fine base. Don’t like garlic that much because you’re some sort of weird vampire? Use less. Love garlic to the point that you cannot imagine a maximum amount of garlic? Use more. Seriously, it’s fine. 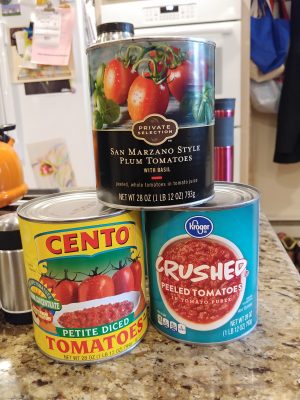 2. Add Three 28oz Cans Of Tomatoes, However You Like Them

Once the garlic is browned, as it is very close to being in the picture above, add three 28oz cans of tomatoes. “But what KIND of tomatoes?” you might be asking. Whatever you can get your hands on is my easiest answer. As you can see from the above photograph, I ended up using three different cans of three different types of three different brands, although, technically, Private Selection is Kroger’s “Oh, so you’re a sucker for stuff that looks fancier, even though it isn’t?” brand.

A couple of things: 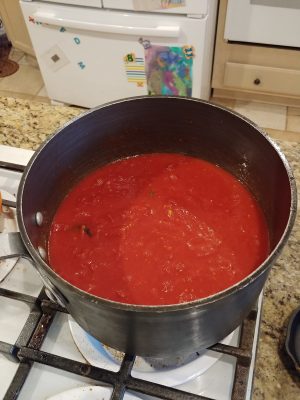 3. Cover, Then Cook For Awhile

If you were wondering what 84oz of tomatoes in a saucepan looks like, you can see it above. It will not take long for this base to get up to a strong boil.

“How long is awhile?” is something you might be wondering, and I will simply say this: an hour is good and two is better, and an afternoon is best, presuming of course that you can control the heat. If you can’t, you can scorch the bottom of the sauce and that, my friends, is a very real problem, because scorched tomatoes are absolutely not tasty.

Plan to cover the sauce with the heaviest lid you’ve got. I am very lucky in this case, as I very coincidentally have a cast iron lid that fits this particular pot perfectly. 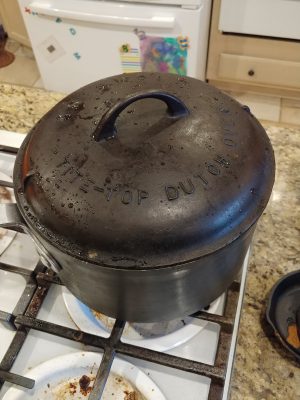 The point of the heaviest lid is minimizing, to whatever extent possible, liquid escape via steam. Even at the lowest setting, this sauce will burble and steam, and if you are not sufficiently careful, you can cook off all the extra liquid, which contributes directly to the aforementioned scorching.

4. Throw Some Stuff In There!

The Cook For Awhile portion is also an opportunity to add other things to the sauce, including:

In my house, we add either sausages or meatballs, depending on who is advocating for what and what we have in the house. However, it is worth noting that you need to decide whether you want to add cooked or uncooked meats. If you’re adding cooked meats, no problem! Just chuck ’em on in there and plan to start eating soon. However, if you’re adding uncooked meats, you need to be prepared to give them a fairly considerable amount of time to thoroughly cook through. It would be dangerous to recommend a particular amount of time, but the absolute mininum you want to have meats simmering in a sauce is probably at least an hour. If you can leave them longer, that is probably even better.

Meanwhile, added veggies will soften relatively quickly, unless you are putting some oddly dense ones in there. Are you? Don’t be weird.

For this particular sauce, we added pre-cooked sausages and mushrooms. This is the family recipe that I grew up with; we were not, for whatever reason, a meatball family. 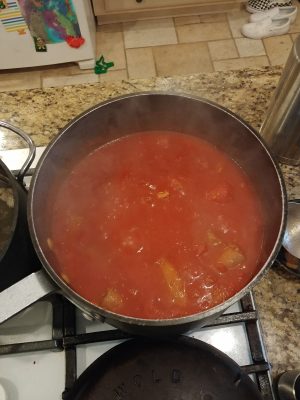 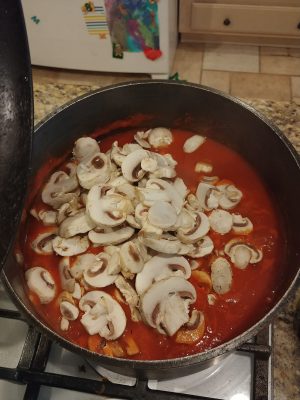 5. I’m Not Going To Write Out Descriptions For Cooking Pasta

You’re an adult; you can boil water and add preferred pasta.

If you’ve given this sauce sufficient time to cook – meaning any added meats are done, and any added veggies are softened – then prepare your pasta (and garlic bread, if you are worried about calorie deficiency) and serve. The total time here, in the most minimum imaginable case, is probably 45-60 minutes, assuming cooked meats. That’s a pretty fast turnaround for a sauce that will potentially last you the remainder of the week. The total time here, if you’re cooking meats in the sauce, is probably more like 90-120 minutes, all things considered, and that is still a minimal amount of time to prepare a significant amount of food that can be used to feed an awful lot of people in a fulfilling way. 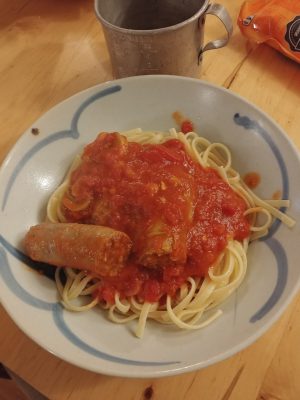 The only thing you have to absolutely ensure is that you do not cook the sauce down too far. That can be achieved by covering it, constantly stirring, and controlling the heat that you have going underneath it.