Bambi is old. It’s a 1942 film produced by Walt Disney. As in the physical man named Walt Disney.

The movie was an initial disappointment costing $1.7 million. It failed to make budget at the box office, grossing only $1.64 million. I think it’s fair to say things worked out for Walt though. To give a sense of the legs on the film, Bambi II was a terrible direct-to-video movie that nevertheless sold 2.6 million copies in the US in its first week.

I heard my first Bambi spoiler something like 32 years ago—that’s 32 years before seeing the film for the first time with my daughter tonight 2. One might think that I’d have had the opportunity to forget that tidbit of information along the way, but I hadn’t. If anything, it’s loomed larger knowing that I’d eventually see it with my very sensitive and caring daughter.

Like many old movies, Bambi takes its time just introducing settings. This is a movie intended for the youngest of children, but it might be five or more minutes of run time into the film before the first bit of dialog and plot point occurs. The camera regularly hangs on scenes in a way that could never happen now. There’s no time these days to watch leaves blow and reflections in ponds. If I were to watch the movie again, I’d do so with a notepad to count how many times they thought they were doing something clever by showing an animated reflection of something.

Much of the screen time is occupied solely with exploring the setting. It’s about looking at objects, and not even necessarily through a character’s eyes. It’s about playing on ice and smelling flowers, because it’s a movie about life in the thicket, and the thicket itself as a setting is important to life in the thicket. It’s about faux camera bokeh to focus on one layer of animation rather than others. Someone, perhaps Disney himself, thought this was cool and important to work on.

All this is to say that in some ways the movie feels slow, like a great many movies from the 1940s.

But if it is slow, it is not because it doesn’t go places. Bambi’s mother dies. Even if that were the only thing to happen in four hours, that’s a lot, and it puts other films with more obvious action sequences to shame. Perhaps knowing 32 years ahead of time built it up in my head, but my daughter had no such excuse and was predictably devastated. And it makes the stakes real for the rest of the movie. If the film was willing to do that to her, what else might it do? Later dramatic scenes don’t feel safe for protagonists in the way that cartoon conflicts often are. This movie has menace that a lot of films intended for adults lack.

Also running counter to the slowness is the transition from his mother’s death. As soon as the Great Prince of the Forest speaks the words that seals her fate, we cut to black and we hear cheery springtime music about love. The Owl is explaining why love is terrible, and each of the main characters are non-consensually kissed by their long-eyelashed female clones who they immediately fall for. My daughter was still reeling from the blow, but I chose to let the film continue, trusting the filmmakers to guide the transition. better than I.

In the moments after watching Bambi, I couldn’t help but make parallels to Gone With the Wind. Both films paint sympathetic portraits of characters living a harsh life. Neither film wastes any time trying to understand the motivations of the antagonists. The camera tells you who the good guys are, and it stays with the good guys throughout. There certainly is drama, but retrospectively the purpose of the drama is to give a sense of the lives of the characters, not to tell one particular story. And the lives depicted in both films are mostly nasty, brutish, and short.

Yet, in 2018 the way of life celebrated by Gone With the Wind is gone, celebrated only in parties thrown by Paula-Dean-types. Bambi, and the untold number of deer Bambi represents, is timeless. One must ever be watchful when venturing out from the safety of the thicket. 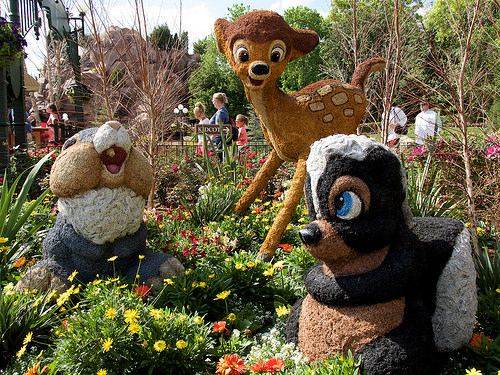