The Enlightenment continues to fascinate us and I think there are a few reasons for this. The first is that the philosophes saw themselves as engaging in a coherent project, which they propagandized for as something significant and world-altering. They saw themselves, that is, as making history and they were self-consciously historical actors. Secondly, their project feels somehow particularly modern. Even the debates of the Renaissance can seem abstruse and distant at this point, but the Enlightenment writers are hashing out issues like free speech, the natural rights of man, religious minorities, and how we recognize and establish truth- those things that still bedevil us, in other words. And finally the Enlightenment seems incomplete and ongoing, like something that began in the 1700s, in European cafes, libraries, salons, and printing houses, but will never be quite finished, touching as it does on how we understand ourselves, both collectively and individually. 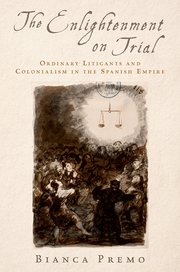 The historian Bianca Premo would argue, I suspect, that we need to rethink those origin myths starting with our image of the Enlightenment as the work of caffeinated, hyper-literate European men, and a few women. Premo’s recent study The Enlightenment on Trial focuses, instead, on the “lived” or “practiced” Enlightenment of forgotten, subordinate, or marginal “ordinary people, even those who could not read or write.” Using the records of poor, unlettered, and enslaved people in the Spanish American colonies who took on their superiors in civil courts, she shows how they used concepts like rights, merit, and freedom in ways that broadened the definition of Enlightenment simply by seeing themselves as “juridicial actors possessing a natural right to litigate.” Jorge Canizares-Esguerra’s blurb, “To understand Enlightenment, go to Peru, don’t read Voltaire” is a bit hyperbolic. But, at the very least, Premo has made a very strong case for an overlooked battlefield in the larger war.

How did an ordinary peasant file a civil suit in the first place? First, the litigant needed to find an “agent” to write the complaint, preferably on paper with a royal seal. They often had to track down a petition writer in “the back alleys of the ‘lettered city’.” Here, I imagined a peasant wandering into a saloon in a spaghetti western, but looking for a writer-for-hire instead of a gunman. Premo does a solid job of reading deeply into the written record to show how the litigants were active participants in a process that was often handled largely in text. This is important groundwork for what comes later, however the first three chapters- on the process of filing suits, the new legal philosophies that moved away from ideas of justice to ideas of rights, and why the volume of suits increased across the colonies while declining in Spain- might be of varying interest to general readers. Historians will likely find them of deeper interest.

However, I was a bit impatient for the actual case histories, which come in the second half of the book. Here, we learn about colonial women who took their husbands and lovers to civil court for divorces, alimony, or better treatment, where they would previously have gone to priests. As Premo notes, “they practiced the Enlightenment in the very act of going to civil court.” They also “employed arguments about the natural right to self-preservation to advocate for the freedom to live independently from men…” In some cases, they shopped around, appealing to religious and secular criminal and civil courts depending on which was more sympathetic. In general, these litigants were moving away from a traditional culture of religious mediation towards a legal culture of rights.

Next, we learn about native litigants. Indigenous legal customs had, similarly, “favored conciliation, community adjudication, moral balance, and the multi-centricity of legal authority…” But in the second half of the 1700s, cracks appeared; there was a new “tendency to challenge birthright with arguments about merit and new articulations of custom and history.” The number of cases brought increased significantly at the same time as elite status based in lineage declined. Commoners argued that leadership should be based, instead, in skills and experience. Their critics, meanwhile, “lamented the coming-of-age of a generation of troublemakers.”

When slaves took on their masters they shaped the laws while “they were also making Enlightenment thought.” Critically, they posited freedom as a state of becoming, a state that could be reached by a slave. This recalls Kant’s notion that Enlightenment is a process of liberation from forms of unfreedom as well as Foucault’s idea of an Enlightenment ethos around human agency. But here, in the cases of slaves, freedom is not something abstract or theoretical. “In the end”, Premo writes, “slaves themselves were instrumental in plotting out the liberation theology that so dominates Western thought.”  She compares this to the Haitian Revolution, in which slaves fought and died for notions of freedom and revolution inspired by Europe, but in a revolution which was treated for so long by western historians as something unthinkable… which nevertheless occurred.

Perhaps, the most important merit of the book is in demonstrating that many things unthinkable actually happened. Given that we see the Enlightenment as a process of liberation from traditional customs and rules, it’s surprising that we so often forget those marginal figures who most needed to be unshackled from the past and who, thus, fought with greater vigor than many of their more renowned counterparts. Premo’s book is a very worthwhile collection of battle stories from the front lines of the Enlightenment.

Next Up: A related recent book, “Litigating Across the Color Line: Civil Cases Between Black and White Southerners from the End of Slavery to Civl Rights” by Melissa Milewski.